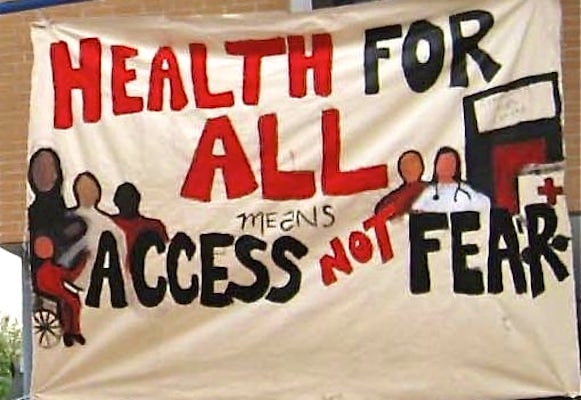 Doctors and medical students: Health care for all, including refugees. (Photo: rabble.ca)

Earlier this year, the NDP struck a supply-and-confidence agreement with the Liberals to support the latter’s government until 2025. A central piece of this agreement is a means-tested dental care program. “Means-tested” refers to how eligibility for the program is determined by financial position.

In this case, the agreement says that families with an annual income of less than $90,000 not already covered by insurance would receive some unspecified level of coverage, while families with an income of less than $70,000 will be exempt from co-pays (a flat-rate fee sometimes charged by insurance companies for each claim). In other words, although the exact details are yet to be worked out, it appears that households earning less than $70,000 are eligible for full coverage, while those bringing in between $70,000 and $90,000 will receive partial coverage.

The agreement, and this program in particular, was heralded as a great victory by the NDP, and many progressives welcomed the news. This reaction is somewhat understandable. Decades of austerity and relentless attacks on socialized programs mean any expansion, however modest, feels like a victory.

Of course, reducing barriers to dental care and other medical services not covered by Canada’s meagre and underfunded health care system is an improvement over the status quo. But the status quo is an abysmally low bar. It should not be used as any sort of litmus test for a demand made by a progressive or socialist movement or party committed to the realization of a more just, democratic, and egalitarian society.

Instead, if the NDP or any other party wishes to take up the cause of the left in Canada, its demands must be shaped by a commitment to universality and the expansion of publicly controlled and administered social services.

To be clear, it is not simply a lack of ambition or the failure to pass some purity test that makes accepting means-testing problematic for progressives and socialists. Instead, means-tested social programs cannot form the basis of a progressive movement because they fail on their own merits, divide the working class, and serve rather than challenge the liberal capitalist system that produces inequality and poverty in the first place.

Means-testing fails on its own merits

First, means-tested programs that create barriers to access, like the need to prove eligibility via tax information or other bureaucratic processes, result in people who technically qualify for programs not taking them up.

This can happen for a variety of reasons, including a lack of awareness about the program or one’s eligibility for it, the complexity of navigating bureaucratic processes, a lack of trust in authority, a language barrier, or due to a hesitance or stigma related to accessing targeted social programs.

The result is that it is very common for means-tested programs to have relatively low take-up rates. For example, citing the complexity of the required paperwork, a Finance Canada report found that in 2014, Canadian workers missed out on $175 million from the Working Income Tax Benefit for which they were otherwise eligible. Take-up of means-tested benefit programs among Indigenous and racialized peoples are especially low.

Conversely, means-tested programs also play a role in the “poverty trap,” which refers to instances where an increase in income renders one ineligible for a benefit or service that may be worth more than the additional wages. This means people whose material wellbeing could otherwise improve by increasing their income while keeping a benefit must conduct a perverse calculus.

Indeed, the significant amount of evidence that universal programs actually do a better job at reaching people with very low incomes than targeted, means-tested programs makes it all the more clear that universality must be at the core of a progressive electoral platform.

For instance, is there really a significant difference in the economic position of a family with an income of $92,000 and one that makes just $2,001 less? Why create such a division in the first place? The typical responses are usually two-fold: a universal program would cost too much, and social programs should only target those who need them, not high-income earners. Both arguments should be rejected outright by any leftist party.

When it comes to the finances of a social program, it is essential to remember that means-testing comes with its own costs. The need to determine eligibility adds a costly layer of bureaucracy. Indeed, a 2011 report by the Washington-based Centre for Economic and Policy Research found that introducing a means-test to Social Security, a universal program for those of retirement age, had the potential to “eliminate most, if not all, of the savings from a plausible means test on affluent beneficiaries.” It is also the case that the constraints on public finances are primarily the result of a politics of austerity that must be challenged, not assumed.

Further, means-tested programs create artificial divisions that make it more difficult to win and defend social programs in the first place and build the type of working class solidarity that can fuel a movement for change.

Social programs have been under attack for decades. Universal and means-tested programs alike have been eroded or eliminated in that time. However, universal programs have generally proven to be more robust in the face of right-wing and (neo)liberal attacks. This is partly due to the much larger coalitions that can be built to defend them.

To see this in action, one needs to look no further than the various iterations of signs at Republican rallies in the U.S. supporting Medicare or how health care has become embedded in Canadian identity. Indeed, some universal programs, like primary school or the library, are so ingrained in our culture that they are rarely thought of as (universal) social programs at all. Nonetheless, they too are under constant attack from the right and must be defended.

Means-testing, on the other hand, divides workers amongst those who benefit from a program and those that don’t. As Walter Korpi and Joakim Palme put it, this “creates a zero-sum conflict of interests between the poor and the better-off workers and the middle classes who must pay for the benefits of the poor without receiving any benefits.” This can create animosity toward social programs generally and beneficiaries of means-tested ones in particular, which is hugely detrimental to building the type of movement and politics needed to create a more just Canada. It also undermines the idea that means-tested programs can act as an intermediate step on a path to full, universal coverage.

Finally, at best, means-tested programs only paper over the inequality that capitalism produces while, at worst, they inhibit our ability to move beyond it. They do this not only by sowing division among the working class but also in the way that they reinforce a destructive discourse of individualism and the idea that inequality and poverty are inevitable when, in fact, they have simply been normalized by a system that requires them to function.

Another way of putting it is that means-testing plays into what Mark Fisher called “capitalist realism,” epitomized in the false narrative that “there is no alternative” to liberal capitalism. Class stratification under capitalism, often justified by the myth of meritocracy, requires destitution for many and gross excess for a few. Means-testing, and the artificial division of the working class it creates, helps to normalize this dynamic: poverty is escapable for the individual but not society.

In contrast to means-tested programs, a left electoral platform must embrace a program of transitional demands (or non-reformist reforms, as André Gorz put it). A universal, publicly owned and administered dental care program would be such a demand. This is because it meets two critical criteria: (1) it improves the material wellbeing of people today while also being part of the just future envisioned by the left; and (2) it erodes the power of capital by decommodifying an essential service while also helping to build the kind of solidarity necessary to overcome it. The same could be said of current movements for fare-free public transit, the decommodification of housing, and universal mental health care, among others.

However, it is important to note that universal eligibility is not sufficient. Indeed, “universal” can often be narrowly interpreted, excluding those without citizenship status. It is also the case that access to such programs may be inhibited by non-economic concerns, such as the systemic racism faced by Indigenous peoples in Canada’s health care system or the lack of funding for services close to where people live. A program is not universal unless it is truly accessible and meets the differentiated needs of all.

Although much of the struggle for a democratic and just society will necessarily occur outside electoral politics, when socialists and other progressives engage in the space, they must do so thoughtfully and strategically. Critically, their demands must meet the material needs of the working class today while also challenging the capitalist system that produces inequality and destitution in the first place. Means-tested programs don’t do this, but universal programs can.

Joshua K. McEvoy is a PhD candidate in Political Studies at Queen’s University. His research focuses on environmental politics and just transition movements.