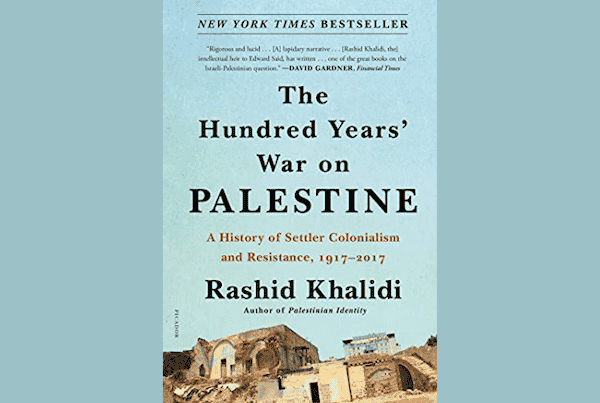 With the writing of “The Hundred Year War on Palestine–A History of Settler Colonialism and Resistance, 1917-2017″, Rashid Khalidi has created an interesting well-written overview of the Zionist colonial-settler enterprise in Palestine. One of the underlying features of the creation of Israel is how well it fits into the colonial-settler mindset that established the current Five Eyes scenario of the United States, Canada, New Zealand, and Australia within the global influence of the British empire. The indigenous people of each of those regions were effectively done away with, labelled “savages” and “uncivilized”, beneath contempt, and essentially to be eliminated through various means of genocide and ethnic cleansing.

In Palestine, those attempts at ethnic cleansing, a necessity for the Zionists in regard to their demographic fears of majority Arab/Palestinian population, came up against the post-WWII decolonization movements rising from the liberal rhetoric of the western powers and the Cold War conflict with the Soviet Union. It also came up against the will of the indigenous people, the Palestinians, who “have shown unusual patience, perseverance, and steadfastness in defending their rights, which is the main reason that their cause I still alive.”

While looking at the “Hundred Years’ War”, Khalidi divides it into six “declarations of war” as a means of highlighting the different eras and approaches to the Palestinian struggle: the Balfour pre-WWII era; the nakba; the 1967 war; Beirut; the first intifada; and the second intifada leading into the “war on terror”.

Several threads through Khalidi’s writing make it highly informative, accessible, and powerful in its honest forthright approach. The latter stands out significantly. While recognizing that targeted assassinations, imprisonment, and exile have eliminated many Palestinian leaders, he does not avoid criticizing past and current leaders for the mistakes they have made both with their internal divisions and with their conduct in relation to the rest of the world. The PLO/PA have lost all integrity and Khalidi highlights the path of that loss.

Another aspect creating an accessible read is Khalidi’s ties into the personal information of his own life lived within and on the edges of the ongoing war on Palestine. This came through most particularly with his descriptions of the Beirut invasion and the political and social aftermath not just in Palestine/Lebanon but in the greater region and globally.

The latter element rounds out the history. For each declaration of war, the war is discussed briefly and then branches off into all the ramifications of that era both domestically and geopolitically abroad, highlighting of course U.S. involvement but also the timid fearful attitudes of the Arab states, none of them democracies and all of the governments intimidated not only by Israeli power, but also the ongoing threats and coercion from the U.S. and its subordinate allies.

As I have found with most history books, the timeline at the end is tricky. Khalidi essentially sees Palestine as down and out–other than the quote above on steadfastness–with the final touches of Trump’s obsequious actions eliminating several of the long-argued narratives, settling them definitively and unilaterally in Israel’s favor.

Yet two years after publication, there is hope that at least on the international scene, many more people, if not their governments, are aware of Israeli atrocities and crimes against human rights. In spite of–and in some views because of–Israel’s hasbara attempts, much more knowledge of how Israel is actually treating the indigenous Palestinian population has become known. The BDS movement, the arguments concerning the IHRA definition of anti-Semitism, and the declarations by B’Tselem, Amnesty International, and Human Rights Watch declaring Israel an apartheid state have all contributed to an increasing knowledge base about events in Palestine.

Perhaps more importantly, events in Ukraine/Russia and the broader implications of not just the actual war, but the tendency of many other countries in the world not to side with U.S./NATO while looking into and adhering to alternate global financial and political arrangements may have large effects on the Middle East in general and maybe then into Israel. Khalidi recognizes that the U.S. “will not necessarily maintain the near monopoly over the Palestine question, and indeed over the entire Middle East, that it has enjoyed for so long.”

Regardless of either the knowledge gained from recent civilian actions or the influence of the larger geopolitical effects of the Ukraine/U.S./Russia war the path forward will require and undoubtedly will sustain the “unusual patience, perseverance, and steadfastness in defending their rights” of the Palestinian people themselves.

“The Hundred Year War on Palestine–A History of Settler Colonialism and Resistance, 1917-2017” is a valuable and timely addition to the Palestinian narrative. It provides an over-arching view of this one particular instance of colonial-settlerism that has significantly influenced global geopolitics for the past century and will continue to do so moving forward.

Jim Miles is a Canadian educator and a regular contributor/columnist of opinion pieces and book reviews to Palestine Chronicles. His interest in this topic stems originally from an environmental perspective, which encompasses the militarization and economic subjugation of the global community and its commodification by corporate governance and by the American government.