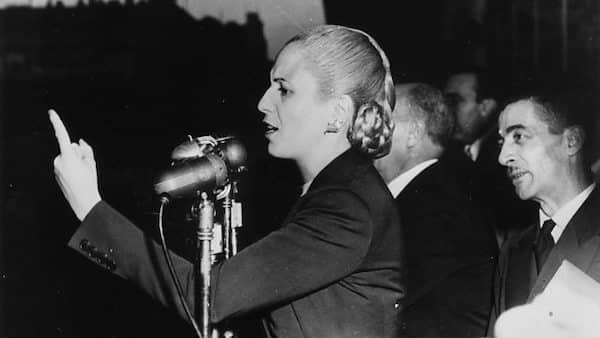 Last night tens of thousands of people participated in a torch light march in the central part of Buenos Aires to honor the contributions that Evita Peron made to the workers and poor on the 70th anniversary of her death. In her short life Evita was a union leader who championed the right for women to vote, access to schools and medical care for all. While the oligarchy tried to wipe away her legacy today she remains more popular than ever among the Argentine people. –Editorial

It is seventy years since the death of Evita, an extraordinary character in Argentine and Latin American history. Owner of a penetrating and mobilizing oratory, she was a proudly plebeian popular leader whose class instinct defined the most advanced and contesting features of Peronism. Her untimely death was celebrated with perverse joy by an oligarchy that today is even more recalcitrant than her predecessor of 1952, which never forgave her irreverence, her rudeness and, above all, her policies of redemption and substantive, concrete, tangible empowerment of the popular classes and strata of this country. Her passionate anti-imperialism and her fiery and uncompromising rejection of the oligarchy synthesized the best of the experience of Juan Perón’s government. Moreover, I am convinced that the 1955 coup would have been thwarted if Evita had been alive. I know that this is just a conjecture, but there are many arguments with which to validate this hypothesis.

Moved by her permanent desire to educate the people, on her deathbed she thought it necessary to make known what she had learned during her years in government. With great effort she dictated her reflections summarized in thirty brief chapters that make up a magnificent text of political education entitled Mi Mensaje (Buenos Aires: Centauro Ediciones, 1987). Unfortunately, this work is little known even by those who identify with Peronism and Evita’s teachings. I have selected for this brief homage two paragraphs that have an extraordinary topicality, as if they had been written contemplating today’s Argentina and its enormous challenges. One referred to imperialism, the other to oligarchy. Here they are:

“Imperialisms! Perón and our people have been touched by the misfortune of capitalist imperialism. I have seen it up close in its miseries and crimes. It claims to be the defender of justice while it extends the claws of its rapacity over the goods of all the peoples subjected to its omnipotence. It proclaims to be the defender of liberty while it goes about chaining in chains all the peoples who in good or bad faith have to accept his unappealable demands.”

“But even more abominable than the imperialists are the men of the national oligarchies who give themselves away, selling and sometimes giving away for coins or smiles the happiness of their people. I have also known them closely. In the face of imperialism I felt nothing but the indignation of hatred, but in the face of those who give away their peoples, I added to it the infinite indignation of my contempt. Many times I have heard them apologize for my ironic and biting aggressiveness. “We can do nothing,” they would say. I have heard them many times; in all shades of lies. Lies! Yes! A thousand times lies…! There is only one invincible thing on earth: the will of the people. There is no people on earth that cannot be just, free and sovereign. “We can do nothing” is what all the cowardly governments of subjugated nations say. They say it not out of conviction but out of expediency.”