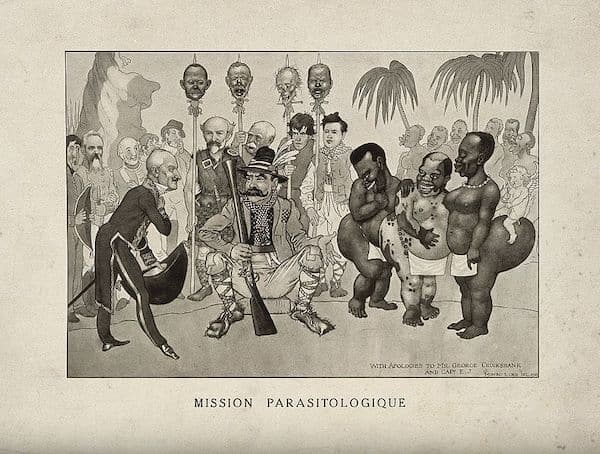 In 2019, Italian Deputy Prime Minister Luigi Di Maio accused France of using currency arrangements to “exploit” its former African colonies, “impoverishing Africa” and causing refugees to “leave and then die in the sea or arrive on our coasts”.

The ostensible intent of the ‘Franc of the French Colonies of Africa’ (FCFA) was to cushion France’s colonies from the drastic French franc (FF) devaluation required to peg its value to the U.S. dollar, as agreed at Bretton Woods.

In a show of her generosity and selflessness, metropolitan France, wishing not to impose on her faraway daughters the consequences of her own poverty, is setting different exchange rates for their currency.

In December 1958, the CFA franc became the ‘Franc of the Communauté Financière Africaine’ (still FCFA). In 1960, President Charles de Gaulle made CFA membership a pre-condition for decolonization in French West and Central Africa.

First, France could pay for imports from CFA countries with its own currency, saving foreign exchange for other international obligations. This became especially advantageous when the FF was weak and unstable.

Second, the French Treasury often paid negative real interest rates for CFA reserves. Thus, CFA countries have been paying it to hold their foreign reserves! Investment income accruing is deployed as French aid to CFA countries in the form of loans to be repaid with interest!

But CFA countries themselves cannot use their own reserves as collateral for credit as they are held by the French Treasury. Thus, during the global financial crisis, they had to borrow, mainly from France, at commercial rates.

Third, by supplying FCFA at the fixed rate, seigniorage–the difference between the cost of issuing currency and its face value–effectively accrued to France and the European Central Bank.

For every euro so deposited, the FCFA equivalent is issued and made available to the depositing country. When France joined the euro in 1999, one euro fetched 6.55957 FFs, or 655.957 FCFA.

Fourth, French companies operating in the CFA have been able to freely repatriate funds without incurring any foreign exchange risk.

The CFA not only benefits France, but also elites in CFA countries. Their appetite for faux French lifestyles explains their preference for overvalued exchange rates.

The CFA also facilitates financial outflows, no matter how illicitly acquired, as long as they do not challenge the neo-colonial status quo. For decades, all manner of French governments have consistently backed these elites, often supporting despotic rule.

When its interests in Africa have been threatened, France has unilaterally deployed combat troops and superior armaments, always insisting on its ‘legitimate’ right to do so.

France is alleged to be behind military coups and even assassinations of prominent personalities critical of its interests, policies and stratagems. On 13 January 1963, only two days after issuing its own currency, Togo President Sylvanus Olympio was killed in a coup.

In 1968, six years after withdrawing Mali from the CFA, its independence leader and first President, Modibo Keita was ousted in a coup after trying to develop its economy along more independent and progressive lines.

When the CFA was first created in 1945, the colonies deposited 100% of their foreign exchange reserves in a special French Treasury ‘operating account’. This requirement was reduced to 65% from 1973 to 2005, and then to 50%, plus an additional 20% for daily foreign currency transactions or “financial liabilities”.

The FCFA arrangement was supposed to end for UEMOA countries from 20 May 2020. However, the proposed West African ‘eco’ currency is still not yet in circulation, while the transfer of euro reserves from the French Treasury to the West African Central Bank has yet to happen.

While only six former French colonies in Central Africa formally remain in the CFA, the reform is less than meets the eye. France remains UEMOA’s ‘financial guarantor’, appointing an ‘independent’ member to its central bank board.

After its creation, FCFA parity was fixed at 50 to one FF. On 12 January 1994, the FCFA was devalued by half, as demanded by the International Monetary Fund and supported by France, following commodity price slumps and related foreign exchange problems.

The devaluation shocked CFA economies as the FCFA’s value fell by 50% overnight! This pushed up the prices of imported goods, especially food, while increasing the FF’s purchasing power.

Meanwhile, eight FF devaluations between 1948 and 1986 against the dollar and gold have also meant great losses to the value of CFA reserves. The claim that CFA countries have benefitted from anchoring the FCFA to a supposedly stable FF has been undermined by its 70% cumulative devaluation over this period!

No sovereignty, no development

Socialist Party President François Mitterrand was no less neo-colonial. He warned France would become irrelevant in the 21st century without controlling Africa.

We have to be honest and acknowledge that a big part of the money in our banks comes precisely from the exploitation of the African continent. Without Africa, France will slide down [to] the rank of a Third World power.

Claiming to be from a different generation, President Emmanuel Macron promised to end neo-colonial arrangements. Yet, at the 2017 G20 Summit, he patronizingly declared Africa’s problem “civilizational”.

we must have the courage to say there is a cord preventing development in Africa that must be severed.