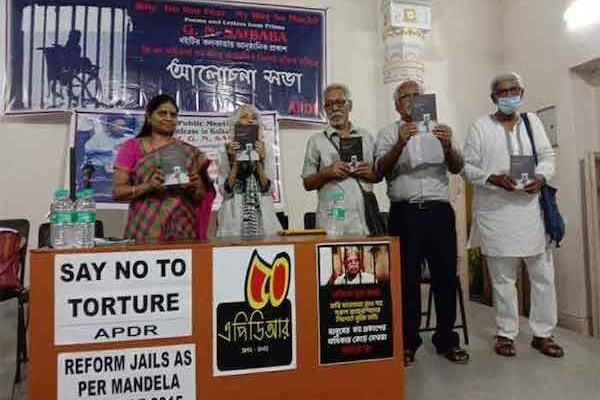 Association for Protection of Democratic Rights (APDR) rose to the very need of the hour by staging a protest meeting for release of political prisoners. Even if not such large numbers, an event of most qualitative significance in light of neo-fascism sharpening it’s fangs day by day.

The central focus was on the issue of Professor G.N.Saibaba.Leadership of organizations like PUCL, CRPP, Asansol Civil Liberties and Prisonmen Committee addressed the meeting.

The Hall was simply jam packed. The wrath against neo-fascist suppression and framing of democratic activists was written on the faces of the participants. It was 30th July 2022 and the venue of the event was Mahabodhi society Hall, College square, kolkata. The proceedings started at 5 pm.

The challenging task of steering proceedings fell on the shoulders of Sujata Bhadra. A resolution, holding aloft the key demand of unconditional release of all political prisoners in the country, was read out and elaborated by Mr Bhadra.

Vasanta’s speech was heart touching and illustrative. I admired her sheer boldness in recounting all her experiences meeting her husband in jail and earlier on her bonding with  her husband in the social struggle. She looked ever determined to challenge the iron feet of oppression. She gave a lucid portrayal of Saibaba’s struggle. Her daughter recited a poem of her father. Jhilam and Satyaki also recited some other poems of Saibaba with a Bengali translation following them.

Speakers most illustratively portrayed how the Constitution was virtually defaced to incarcerate those waging dissent and how jail conditions were similar to those of colonial days.

Saibababa’s book “Why do you fear my way so much?” was inaugurated by the Presidium. Rights activist Dr Mahabbat’s song was exhilarating.

The Convention ended with the resolve of removing every brick from the wall to give a sporadic boost to the movement for the unconditional release of all political prisoners to convert it into a Social Movement.

Harsh Thakor is freelance journalist who has covered mass movements around India.