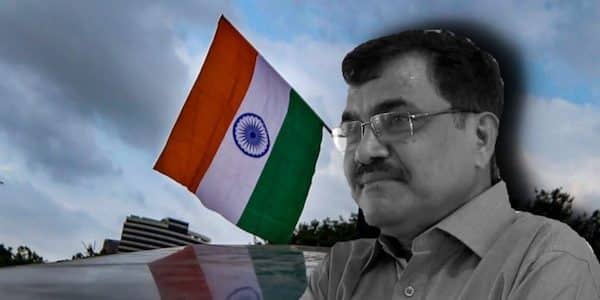 As an email circulates to support a campaign to name Professor Anand Teltumbde in the list of world’s top thinkers to be listed in Prospect magazine, it is time to take note of his important work: Republic of Caste (2018) and put it in perspective. This is more important in the context of the campaign to have a “har ghar tiranga” for the Amrit Mahotsav of Azaadi. If the 75th year of this nation’s freedom cannot be celebrated with a free man and a free mind, the flying of the flag is but symbolic.

Accused of plotting to assassinate the prime minister along with (albeit much later) many other social activists, Teltumbde has been incarcerated in the Taloja jail for over two years now. If a man’s thoughts over the years have debated the constitution and differed with the use of violence as a means to achieve anything, something does not add up. A close reading of his last book to see why it does not is important.

Teltumbde talks about one of his students asking him about why he writes on caste, class and communalism and not on subjects he is formally trained in. It is not that he has not written about the issues that he has academically internalised. He is formally trained in engineering and management. He is not only an academic who has published and taught, but is also one who has been in important executive positions with the government itself. “I have enjoyed being at once in the belly of the beast and fighting it,” he says.

Noted Kannada writer U.R. Ananthamurthy had a special term for this. He would call Teltumbde a “critical insider”: fighting for change in the system as you continue to be a part of the system. Someone who occupies the board rooms, but also has no hesitation being an activist. Someone who believes in engaging with the system while attempting to change it, and comes from an ideology of engagement and not of confrontation (except of course, confronting the issues head on, at an intellectual and structural level).

In an ideological fight, where one is arguing out the methodologies to bring in change, the means are also clearly laid out. It is unlikely that we see Maoist literature that celebrates acquiring power through democratic electoral process. Therefore, labelling anybody as a Maoist is just dumping ideological differences into one large “not us” bucket. Unfortunately, Teltumbde has been lobbed into this bucket.

People engaged in discourse and dialogue, by definition, will be in touch with people with diverse ideological positions and therefore “being in contact” or “possessing literature” is in itself in the nature of carrying forward the conversations, rather than involving in conspiracy. Violence in the Ambedkarite discourse is as much an anathema as peace is for the terrorists.

It is important to note that Teltumbde’s work is not a writing that has emerged in the recent times, against the recent regime. It is an abstraction of his writings over decades on this issue. We are not discovering a new and radical thought in Teltumbde. We knew this all along.

These writings show the differences between the Marxists, Gandhians and Ambedkarites. There is a fundamental difference between the social transformation approach of the Ambedkarite movement and the economic transformation approach of the Marxists. He devotes an entire chapter on the caste and the class dialectic–bringing out the fundamental differences. Here is a quote: “Ambedkar appears to acknowledge the Marxists as his competitors, the second best after himself” and “he faults Marx’s methods on two fronts: one, its reliance on violence, and the other, dictatorship”.

Teltumbde’s arguments are nuanced and are engaging. The division of the class struggle based on skill and labour versus capital accentuated the caste problem instead of diluting it, because it did not pay as much attention to social structures. The capitalist frame could easily co-opt a handful of Dalit businessmen who could espouse the aspect that capital and profits have no caste, but even for that to happen, the fundamental question is whether there is equality of opportunity.

Teltumbde seamlessly connects this to the neoliberal policies of marketisation of education. This not only creates modern ghettos of the privileged (with token representation to prove diversity) but also prevents access to the basic tools that helps one access capital and entrepreneurship.

The entry of privatisation into basic services like education (including technical and higher education) and healthcare are issues of access and affordability. In case of education, a deprived family needs both staying power as well as proximate identifiable role models to make the breach. The upper castes, by virtue of occupying positions of intellect, have it in much larger numbers than the Dalits. This is an issue of horizon and the belief in breaching class. The more there is privatisation (even if it is at the higher level), the more there are speed breakers for the deprived. This is an economic argument weaved into that of the caste.

Healthcare services affect the livelihoods of the poor and even, here while there is universalisation of disease and affliction, there is categorisation of curative facilities. Given that class is so intertwined with caste, it is impossible to address the larger issue by ignoring caste.

While defining inclusion it is said that we need four types of inclusion: social, political, economic and financial. Ambedkar’s view on social inclusion was expressed in the long essay Annihilation of Caste. On political inclusion, we are happy with the limited achievement that we were one of the early nations to adopt universal adult franchise. Teltumbde questions this notion by asking the fundamental question on whether this voting right has led to adequate representation. He not only highlights Ambedkar’s failure to win elections, but lays out the contradictions in the later caste and identity-based assertions of Kanshiram and Mayawati.

The biggest challenge to Ambedkar’s ideology is to escape its saffronisation. The co-option of the symbolism of Gandhi’s cleanliness and the propaganda around built toilets while the state of safai karmacharis (sanitation workers) has not changed, the symbolism of starting the movement from the Valmiki colony, thereby reaffirming the caste roots of the issue, and making memorials and statues are the ways that Ambedkar is being co-opted. It is known that while Ambedkar was the chair of the drafting committee of the Constitution of India, he had some severe differences with it, as is evident in the Constituent Assembly debates. To make him the author of a document that is called holy, only to be mutilated every often with ordinances that take away the soul of the structure is a farce in itself.

If these are the issues that Teltumbde has been arguing about for years, would he have the time to plot an assassination or wage a war against the state? As we celebrate the 75th year of independence, we would like to engage and think freely. For this, someone like Teltumbde should get more than his quota of mulakat time with his family on the phone and in the letters he writes to his daughters. He is much more than that. We may not agree with all that he says, but we need to engage with these debates. The flag represents diversity of colour, the diversity of our land, languages and thoughts. That flag has to flutter in every house.