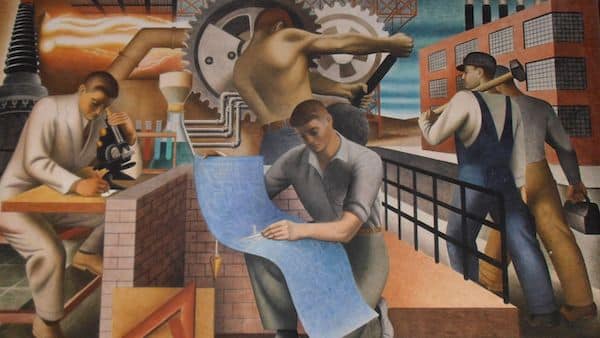 Seymour Fogel, “The Wealth of the Nation,” commissioned for the Social Security Board Building, Washingon DC in 1938.

Last week, Republican Senator Ron Johnson called for ending Social Security and Medicare as entitlement programs, instead transferring them into the discretionary budget where they would be gutted.

Johnson’s proposal follows a similar call by Florida Senator Rick Scott, who earlier this year called for putting Social Security and Medicare up for renewal every five years.

Social Security and Medicare spending is allocated as mandatory spending, funded by workers’ payroll taxes, to prevent them from being pillaged.  Transferring these programs to the discretionary budget would mean their abolition, slashing U.S. life expectancy as millions of retirees die in poverty and from preventable disease.

“If you qualify for the entitlement, you just get it no matter what the cost,” Johnson said. “And our problem in this country is that [mandatory spending takes up] more than 70% of our federal budget, of our federal spending.”

Yes, retired workers are “entitled” to these benefits, because they have been paying for them their entire lives. Out of every dollar workers have earned, they paid eight cents to finance their Social Security and Medicare benefits, matched by equal payments from their employer.

But Johnson and Scott, lackeys for the billionaires that rule over America, are demanding that these funds that workers have been paying into over a lifetime of toil and struggle be stolen from them to make the oligarchy richer and to fund America’s new “forever wars.”

Social Security was created in 1935 as part of President Franklin Roosevelt’s New Deal, in response to a wave of social struggles during the Great Depression. Medicare was created in 1965 during President Lyndon Johnson’s Great Society reforms, against the backdrop of the Civil Rights movement and a strike wave gripping large portions of the country.

With both of these programs, the leaders of American capitalism sought to convince workers that the capitalist system was capable of providing for the needs of society and preventing the mass poverty and early death of millions of elderly people.

Johnson, Scott and their co-conspirators are making the opposite clear: Capitalism means social misery for the workers and the unending enrichment for the capitalist class.

These senators have articulated as a positive proposal what has been a goal of generations of Democratic and Republican politicians, military strategists and leading think tanks. In 2010, Democratic President Barack Obama formed the bipartisan “National Commission on Fiscal Responsibility,” chaired by former Republican Senator Alan Simpson and Democrat Erskine Bowles, a former chief of staff in the Clinton administration.

The commission called for slashing funding for Social Security and Medicare. On the basis of its proposals, the federal government oversaw a squeeze on social spending at the federal, state and local levels, together with significant cuts to Medicare and Social Security.

Now, amid the social crisis triggered by the pandemic, the eruption of war with Russia and the conflict with China, America’s financial oligarchy is renewing its calls for the dismantling of these bedrock social safety net programs.

In March Glenn Hubbard, the former Chair of the Council of Economic Advisers, published an op-ed in the Wall Street Journal calling for slashing Social Security and Medicare to fund a massive surge in military spending, declaring, “NATO Needs More Guns and Less Butter.” Hubbard, a Republican, praised the conclusions of Obama’s 2010 deficit reduction committee and called for the full implementation of its demands.

Hubbard echoed the themes of a 2013 paper by Anthony Cordesman of the Washington think tank Center for Strategic and International Studies (CSIS), which stated: “The U.S. does not face any foreign threat as serious as its failure to come to grips with … the rise in the cost of federal entitlement spending.”

But while there is allegedly no money to pay retirees their retirement benefits, there is no limit to what can be handed out to defense contractors to fund the U.S. conflicts with Russia and China.

In the six months since the outbreak of the U.S.-NATO proxy war against Russia, the United States has pledged over $54 billion to the war effort, equivalent to $2 billion per week. The Senate is currently debating a bill that would send an additional $4.5 billion in weapons to Taiwan as part of the U.S. military standoff with China.

In June, the Senate Armed Services Committee voted to approve a record $858 billion in military spending for Fiscal Year 2023, an increase of $45 billion over the Biden administration’s budget request and nearly $80 billion over the amount appropriated by Congress for the current fiscal year.

This massive surge in military spending is accompanied by a systematic effort to reduce workers’ wages with the aim of further enriching the financial oligarchy.

In June, announcing a surprise 75 basis point increase in the federal funds rate, Federal Reserve Chairman Jerome Powell said, “You have a lot of surplus demand … in the labor market … you have two job vacancies for every person seeking a job, and that has led to a real imbalance in wage negotiations.”

Powell made clear that the Federal Reserve is deliberately seeking to increase the unemployment rate, with the aim of further impoverishing workers, even to the point of triggering a recession.

He complained about the power of workers who are drowning in rising prices, even as corporations rake in the highest levels of corporate profits in years.

Nowhere in any section of the U.S. political establishment is there a single mention of stopping the rampant price-gouging by corporations.

The overwhelming factor driving the increase in prices, according to an April 2022 study by the Economic Policy Institute, has been corporate price-gouging that feeds directly into profit margins. The study found that rising corporate profits contributed six times more to rising prices than rising labor costs, in a significant reversal of the previous period.

In 2021, profits surged 35 percent compared to the previous year, in the highest increase in corporate profitability since 1950.

By contrast, over the past 12 months, average hourly earnings for U.S. workers have increased by just 5.2 percent, meaning that a typical worker makes 4 percent less per hour than he or she did a year ago.

The clear intention of the financial oligarchy that Johnson speaks for is to ensure that the impoverishment of workers taking place throughout the United States is transferred to retirees.

The American financial oligarchy has declared war on the working class. After ending of all restrictions on the spread of COVID-19 and forcing workers back into workplaces that are hotbeds for the transmission of the pandemic, the ruling class is engaged in an all-out effort not only to reduce workers’ wages but to slash whatever remains of America’s badly tattered social safety net.

This policy is creating a wave of social opposition in the United States and throughout the world, taking the form of strikes and protests. The growing mood of militancy and determined struggle has found expression in the campaign of Will Lehman, a socialist worker from Mack Trucks in Macungie, Pennsylvania, for president of the United Auto Workers.

In a letter to UAW members, Lehman demanded “Massive pay increases to make up for decades of givebacks,” “mandatory Cost-of-Living Adjustments (COLA) to keep pace with soaring inflation” and “the re-establishment of the 8-hour day, not on the basis of poverty-level wages, but with wages that allow us to provide for ourselves and our families.”

The financial oligarchy’s ruthless policy of class war, aimed at crushing the working class to dust, cannot be allowed to succeed. Workers must respond with a unified struggle to demand the preservation and expansion of Social Security and Medicare, coupled with double-digit wage increases to make up for decades of declining wages.

Workers must take up a political strategy—linking the fight for livable wages with the fight against war and the defense of democratic rights in the struggle for the socialist transformation of society.