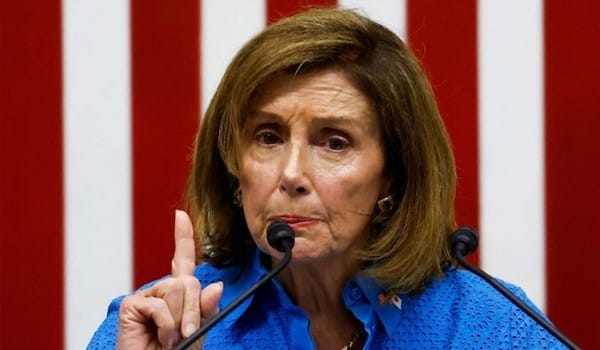 “When I was a little girl, I was told at the beach if I dug a hole deep enough, we would reach China, so we’ve always felt a connection there.”
Nancy Pelosi, August 5, 2022, in Tokyo, Japan

Nancy Pelosi is a member of the United States Congress. She isn’t just any member either, she is Speaker of the House of Representatives, an important leadership position in U.S. politics. She is also third in line to the presidency. If something should happen to the President and Vice President she would lead the Executive Branch of government.

Her position makes her statement about digging a hole to China all the more disgraceful. It is an old trope which gives expression to China’s perceived otherness, that it isn’t just far away, it is actually the very opposite of how Americans see themselves in all their racist and exceptionalist glory.

It wasn’t bad enough that Pelosi visited Taiwan in direct contradiction to what the Chinese government asked. Despite this latest foreign policy debacle in the making, the U.S. still follows the One China Policy and has for the last 40 years. Xi Jinping’s direct request to Joe Biden that she and her entourage of House members skip the visit to Taiwan was ignored. Any claim of presidential impotence was nonsense, as the Speaker elited from a plane bearing the words United States of America, meaning that she had presidential approval to kick sand in China’s face.

She made her unfortunate remarks about digging a hole while in Tokyo at the end of her multi-country Asian tour. Her insulting words should be scorned but not before they are examined for their true meaning. Pelosi’s honesty is a reflection of the entire country’s leadership. They have deemed China an adversary in large part because it is not a white nation. It was fine for China to open itself to capitalist trade and become a World Trade Organization (WTO) member that would supply Walmart with cheap products for American consumers. That role fit the supremacist narrative perfectly. Of course China took that ball and ran with it and now has an economy of comparable size and strength to that of the U.S.

This prowess is not acceptable to a country which exudes white supremacy with its every domestic and foreign policy decision. The U.S. insists upon being a hegemon and a white one at that. This identification as the leader of the entire planet makes concessions difficult. Every other country is seen as either a willing vassal or an enemy to be destroyed. If the enemy is from the global south its position is automatically considered to be the inferior one and even a nation as prosperous as China is given the bum’s rush treatment.

There is no other explanation for the recklessness which brought Nancy Pelosi, Foreign Affairs Committee Chairman Gregory Meeks and others to try sneaking into Taiwan unnoticed. The trip had been postponed months earlier under the guise of Covid prevention. When it was rescheduled and the Chinese government made clear that red lines were being crossed Pelosi and company left the stop off of their official itinerary and showed up late at night.

Racism is the only explanation for treating Xi Jinping and other government officials as if they are dumb.

While Nancy thinks that retelling stupid and racist fables explains away her actions, China is taking real action and Taiwan is suffering. The island has effectively been blockaded by military exercises, the country it depends upon for trade is depriving it of materials like sand, which is needed in its all important microchip production industry. Biden administration amateurs, fresh off their loss in Ukraine, have ignominiously repeated their failure.

Neither Nancy Pelosi nor Joe Biden see the world through other nations’ eyes. Why should they when they live by a belief in U.S. superiority? But they will repeat the process of undermining what they seek to preserve. Every failed attempt to assert U.S. strength leads other countries to form their own alliances in order to protect themselves. China and Russia are closer now than they have ever been thanks to invasions, coups, sanctions, and proxy wars which make the U.S. the enemy of most of the world. Other nations will follow their lead as U.S. desperation creates more crises.

China is the master here, the mature and intelligent country willing to get along with others despite any differences. People who want peace and a just world must follow their lead as every U.S. president presents nothing but new opportunities for world wide mischief making. Nancy Pelosi is not alone in disregarding China. The Biden administration, the rest of congressional leadership, corporate media, and opinion makers all disregard China because it is a non-white country. No matter. Ignorance of international law is no excuse, neither is U.S. willful ignorance of how great power politics is really played.