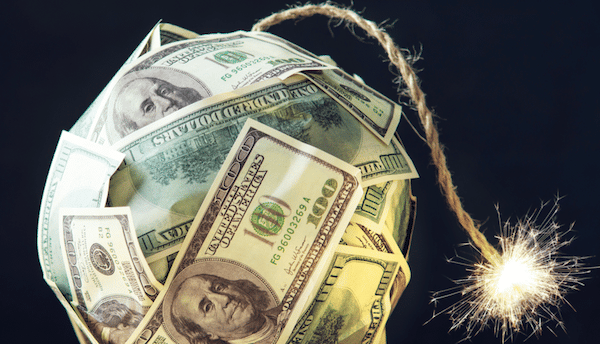 Dollar Bomb – Modern Monetary Theory (MMT) and the Power of the US Dollar in the World Economy (Part 1). (Photo: Orinoco Tribune)

The hegemony of the U.S. dollar was based on the fact that the world’s wealth-holders considered it to be “as good as gold”, even when it was no longer officially convertible to gold at a fixed rate, as it had been under the Bretton Woods system, after the collapse of that system. These wealth-holders were of two kinds: private individuals and institutions, and central banks that held the foreign exchange reserves of their respective countries. The main reason it was considered as good as gold was because the prices of goods and services, with which the price of gold generally moves synchronously, were not expected to rise unduly in terms of the dollar. This in turn was believed to be the case since the dollar wage rates in the U.S. were kept in check through the existence of a reserve army of labour, while the dollar price of the most important input, namely oil, was generally supposed to remain stable over time, despite short-term fluctuations, thanks to the might of the U.S. to impose “discipline” on oil producers.

In the case of central banks, there was an additional factor. They held their reserves primarily in dollars because the dollar was also the medium of transaction in much of international trade, which of course was multilateral in character. In trade undertaken through bilateral trade arrangements, each country can hold claims on the other in terms of the latter’s currency, in the belief that these claims would get offset over time, or would be made to be offset over time, through trade. But in multilateral trade where the scope for such bilateral offsetting does not exist, a common currency is required for holding reserves, whose value in terms of commodities is not expected to decline unduly, namely at a rate greater than the carrying costs of such commodities (because otherwise commodities would be held instead). The dollar, not surprisingly, was the chosen currency.

This situation was already beginning to change, but the imposition of sanctions against Russia in the wake of the Ukraine war has greatly accelerated the pace of this change. Sanctions have sharply increased the prices of oil and natural gas, of which Russia is a major exporter, but not because of any actual shortages of these commodities. Rather, speculative activity has arisen from future expectations of price rise as the U.S. has an embargo on buying these commodities from Russia. As a result, the profit margins of U.S. oil companies have increased substantially, contributing to the sharp rise in the rate of inflation. The implicit oil-dollar link in short has got snapped, putting the dollar under pressure. In contrast, since the price of oil in terms of roubles has been fixed, the rouble has emerged as a favoured currency that is “as good as oil” and hence on its way to becoming “as good as gold”.

The demand for roubles has been further boosted by Russia’s insistence that it would sell oil and natural gas only to buyers who pay for them in terms of roubles. Having dollars, therefore, is of no use in obtaining Russian oil and gas, which makes potential buyers rush to acquire roubles instead of dollars.

But these two factors, important though they are, are by no means all. There is a revival of bilateral trade arrangements with Russia by several countries, including India. Such arrangements had existed earlier vis-à-vis the Soviet Union and had only come to an end because of the collapse of the Soviet Union. Under such arrangements, the U.S. dollar was irrelevant for carrying on trade; there was a certain agreed exchange rate between the two currencies and the claims arising owing to trade surpluses were held in terms of the currency of the deficit country. Such surpluses being akin to “reserves”, one can say that the proliferation of bilateralism is simultaneously a means of diversification of reserves away from dollars towards other currencies, especially roubles in the event of Russia’s trade deficits.

All these reasons push up, other things being the same, the demand for roubles relative to the dollar. It is hardly surprising therefore that the exchange rate which had plummeted for the rouble immediately after the announcement of sanctions has now revived to a level unprecedented in many years. In August 2021, the exchange rate was around 72 roubles (in round figures) to a dollar; after the announcement of sanctions, it went up in favour of the dollar to as much as 136 roubles to a dollar, but then the rouble climbed up steeply so that on August 11, 2022, the rate was around 61 roubles to a dollar (60.6957 to be exact). Over the 12-month period, August 2021 to August 2022, there has been an appreciation in the value of the rouble vis-a-vis the dollar amounting to over 22 per cent.

The sanctions against Russia in other words have turned out to be an “own goal”, not just for the European Union which of course has been reeling under their impact, but even for the United States. More importantly, these sanctions have accelerated the move away from multilateralism towards a proliferation of bilateral arrangements.

This move also means a severe setback for the neo-liberal order. The essence of that order was the imposition of multilateralism; indeed, the hegemony of Western imperialism led by the U.S., and expressed through the supremacy of its currency, which the neo-liberal order sought to uphold, was asserted through the imposition of a multilateral arrangement.

The reason why sanctions against Russia have turned out to be an own goal for the West is because they were based on a miscalculation. It was thought that the sanctions would bring Russia to its knees so quickly that its military action in Ukraine would be over in no time; there was even talk of a regime change in Russia. But all this was utterly unrealistic. Sanctions by their very nature represent a violation of multilateralism, a singling out of one country that is taken out of the multilateral arrangement; the hope of the western powers has always been that the violation of multilateralism would be kept confined to particular instances alone and would achieve its end quickly. But if this assumption turns out to be wrong, then such violation of multilateralism becomes a contagion; it multiplies and proliferates, jeopardising the entire order, as has actually happened.

Of course, from the foregoing, it would be wholly premature to conclude that the decline of the dollar has reached a stage of finality. For the world’s wealth-holders consisting of individuals and institutions, the dollar remains even now the most attractive currency by a long shot. In fact, with the rise in U.S. interest rates in response to the current inflation, finance that had flowed to the third world when U.S. interest rates were close to zero, is flowing back to that country again. The result is a depreciation of third-world currencies, including the Indian rupee, via-a-vis the dollar. This flowback is not just because of the interest rate movement that has made the dollar attractive; third-world countries too have been raising their interest rates in response to the rise in U.S. rates. But that has not prevented the flowback of finance, because in the uncertain world we are entering, finance feels most comfortable in its home base, which is the United States. Given this situation, to write obituaries for dollar hegemony as of now would be utterly premature and silly.

Put differently, there are two distinct tendencies in this regard in the contemporary world economy: one is the flight of finance from the third world to the U.S. as it raises its interest rates to combat inflation; the other is the gradual spread of bilateral arrangements that replace dollar reserves by reserves held in other currencies (above all roubles in the immediate present context) and thereby undermine to an extent the position of the dollar. These two tendencies act in opposite directions as far as the value of the dollar is concerned. But the latter tendency is as yet less significant compared to the former, though it is a forerunner of things to come. The fact however remains that the neo-liberal order that celebrated multilateralism and imposed it all over the globe is coming to an end.