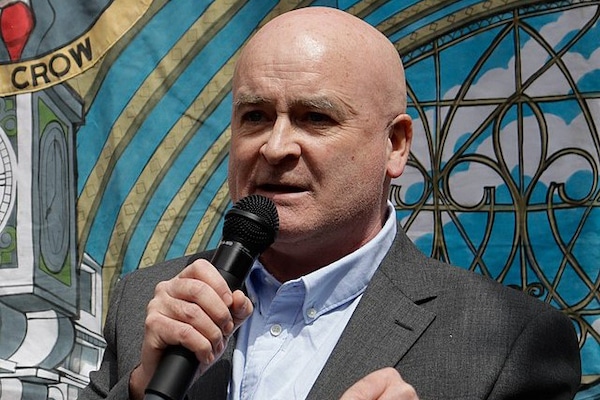 Michael (Mick) Lynch is a British trade unionist and has served as the General Secretary of the National Union of Rail, Maritime and Transport Workers (RMT) since May 2021. Lynch was born in West London in January 1962, one of five children to Irish parents. He grew up in poor circumstances and left school at the age of 16. Qualifying as an electrician, he then worked in construction before being illegally blacklisted for joining a union.

In 1993, unable to find any more work in construction, he began working for Eurostar, and became active in the RMT. The RMT is a union with more than 83,000 members from almost every sector of the transport industry including mainline and underground railways, shipping, buses and road freight. Lynch served two terms as Assistant General Secretary and two terms on its executive. In 2020, after General Secretary Mick Cash took time off due to ill health, Lynch was appointed as the acting General Secretary before winning an election for the permanent role.

Strike action on the railways took place in June 2022 and further days of action have been carried out since. The RMT has been seeking to work with government and employers for almost two years to address the challenges facing the rail industry, including jobs, pay and conditions of rail workers. After an overwhelming ballot for strike action (71% of those balloted took part in the vote with 89% voting in favour of strike action and only 11% voting against) the rail companies have made it clear to the union and also in private briefings to the media that the government is directly controlling the negotiations and hindering a settlement.

Government ministers have continued to refuse to meet to try and resolve the dispute or allow the companies the freedom to negotiate themselves. They have directly threatened rail workers with even more job losses, and said they will use taxpayers’ money to bail out private train companies during strikes. A key aspect of the dispute is the threat of thousands of compulsory redundancies. This will mean increased risks on safety critical infrastructure, less staff on stations and trains, including the removal of guards and catering staff, cuts to cleaning and the closure of nearly all ticket offices. The RMT consider this in essence to be managed decline of the railways where cuts will worsen services for passengers and make the railway less safe and accessible. It points out that if there is to be a full rail recovery post-Covid and with expanding services to meet climate commitments, retention of staff and their skills is essential.

All rail staff are identified as key workers. They work seven-day weeks with very unsocial hours in all types of adverse weather and conditions. Many regularly deal with being assaulted and other anti-social behaviour. Those balloted included cleaners, catering staff, controllers, guards, drivers, engineers, signal workers, station staff, track workers and train maintenance staff. Most rail workers have basic salary rates of between £25 -31,000, around the national median annual salary of £31,285. While rail workers were praised during the pandemic as ‘heroes’ by the UK Transport Secretary, Grant Shapps, for keeping the country moving, all are now facing the cost of living crisis with most having endured two to three years of pay freezes. They are angry their livelihoods are under threat when during the pandemic, rail bosses have taken home £1m pay packets and rail companies have made in excess of £500 million a year in private profits since the start of the health emergency. An astonishing 70% of UK rail routes are now owned by foreign states.

In Wales, the devolved government has shown a contrasting approach to the workforce, with guaranteed no compulsory redundancies and protection of staffing levels and support for the role of ticket offices. The Westminster government in contrast is now threatening to change the law to remove workers’ democratic right to take strike action. The recent P&O scandal (the sacking of nearly 800 staff without notice and their replacement with cheaper agency workers) caused justified anger across the political spectrum and illustrates exactly how ruthless companies can be and how the law is stacked in their favour against working people. While the conservative government expressed horror over the actions taken by P&O management, and threatened possible legal proceedings, it then failed to hold the company to account.

Government and Media Dial Up the Pressure

The UK already has some of the most draconian anti-union laws placing huge obstacles in the path of workers wishing to defend their living standards. Not content with these, both Truss and Sunak (the two Tory party candidates vying with each other to be the next prime minister) have said they would ban strikes by essential workers and make strikes potentially unlawful. Employers are to be allowed to employ agency staff to do the work of striking essential workers. Truss’s proposals also include doubling the notice period which a union must give from announcing a strike vote to beginning industrial action, from two to four weeks, and placing a limit on the number of days on which workers could strike before having to re-ballot after six months.

At present, after having been paid their wages (and paid tax on them), workers are entitled to give a proportion of their salary to their union, which alongside meeting other costs holds it as a strike fund. Truss proposes that members of trade unions would have to pay tax on strike pay—meaning, because this is deferred wages, that they would pay twice as much tax as everyone else. Truss also advocates that that workers would not be permitted to go on strike unless their decision to strike had received not merely the support of 50% of those voting, but 50% of all those eligible to vote. Needless to say, Lynch has been a vocal critic of these plans. The current government has nothing to offer on tackling the cost of living crisis, crumbling public services or dealing with the climate emergency but is busy trying to turn people against each other in the hope that culture wars will distract from growing inequality. Denigrating trade unions and their leadership is par for the course, but many are fighting back with strikes–and not just in rail, but postal, construction, telecommunication workers and Amazon staff. Major public sector unions covering health care workers are soon to ballot on strike action as years of pay freezes are compounded by the massive cost of living increases.

Lynch has shown himself well able to stand up to the usual vacuous media pundits, garnering much praise in the process. It has been observed that Lynch is never verbose–he refuses to engage with political grandstanding and his defence of strike action is articulated in plain terms. Even some of the right wing media has been grudgingly admiring, describing him “making mincemeat out of politicians and broadcast interviewers alike. Hapless Tory MPs that attempted to recite pre-rehearsed cliches and dodgy statistics have been gunned down by the mature, considered and, yes, gruffly charming manner of Lynch”. Importantly, this example has also emboldened members of other unions and gained public support for the strike, with solidarity rallies held around the country. RMT union officials such as Eddie Dempsey (Senior Assistant General Secretary) have been sharing messages pledging support to health care workers.

Ministers and broadcasters have tried to portray Lynch as a ‘hard left’ union ‘baron’, ordering about his members and heaping misery on the travelling public. Being interviewed by media at the start of the strike, Lynch quickly turned the tables by scornfully charging journalists with talking ‘twaddle’, showing them what peaceful picketing looked like and asking why they did not want to talk about the important issues. He talks calmly and simply about the ruling class owning the means of production and mass media, and of the outrage that is predictably provoked when working class people show they can be articulate and have coherent and challenging ideas about how the economy and society should work for the benefit of the majority.

There may be a profusion of Mick Lynch merchandise, but the man himself insists that he does not want to become an icon:

Our job is to deliver the most effective action and articulate our case. Millions of people in this country face lower living standards and the stripping out of occupational pensions. We’re not going to accept that. We’ve got the most peculiar economic situation in this country with full employment and falling wages. Covid has been a smokescreen for the rich and powerful in this country to drive down wages as far as they can.

The RMT is calling for talks with the government and the industry at a national level to reach a fair settlement including no compulsory redundancies, that working conditions and jobs are subject to negotiation and agreement with the RMT and a fair pay rise that takes into account the rising cost of living. 180 years after the first general strike in Britain, there is talk once again of joined up trade union action and a new general strike. This is something that Lynch would support in the unlikely event that the Trades Union Congress were to call. With growing pressure from inflation fuelled by massive rises in energy bills, and millions being plunged into poverty, it is not inconceivable that this might yet become a reality should the example of the RMT be the catalyst that inspires real unity of action and determined leadership.