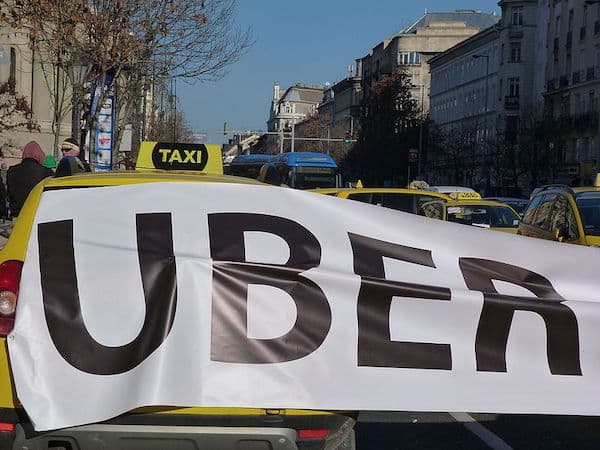 The recent reporting on the Uber Files—a series of 124,000 communications, dated from 2013 until 2017, that Mark McGann, one of Uber’s top lobbyists, leaked to The Guardian—has shed light on the company’s strategies to gain global prominence during its nascent years. McGann and the many reporters working on the project through the International Consortium of Investigative Journalists are commendable for their efforts to bring this history to public attention. Still, the reporting elides a much larger story about the rise of a new model of labor relations being implemented throughout the globe, and workers’ efforts to stop it.

Founded in the wake of the global financial crisis, Uber Technologies worked to take advantage of widespread unemployment, decades of neoliberal policymaking, and advances in geolocative and algorithmic technologies to “disrupt” the locally owned and highly regulated global taxi industry. With a lean model that pushed capital expenditures and risks onto its workforce, Uber and “the gig economy” upended transportation throughout the world. By the time Uber went public in 2019, it had established a firm global presence and a valuation of $76 billion.

The Uber Files reporting shows that Uber broke into tightly regulated markets by subsidizing cheap rides and offering bonuses to drivers with investor cash, only to eliminate those subsidies and slash driver pay once they established market dominance. To maintain operations, the company bought off academics to spin lawmakers and the media. Uber representatives had secretive meetings with Emmanuel Macron and convinced Joe Biden when he was vice president to amend his speech at a World Economic Forum meeting. When regulatory threats did come, the company used a “kill switch” to hide information from the authorities.

Uber doesn’t just break laws or act unethically. Their entire premise, in the words of an Uber operative, is “just f—ing illegal.” Some argue Uber is “not a business proposition” but “a political coup…to seize control of a portion of urban transport infrastructure from the voters and taxpayers.”

But more fundamentally, Uber’s entire model has been about breaking—if not smashing—labor law (and worker power) through systematic misclassification. Despite the power Uber exercises over its workforce, they deem drivers “independent contractors” to exempt themselves from minimum wage and other workplace protections. As an organizer with Rideshare Drivers United, I’ve heard repeatedly how Uber regularly changes the terms of work in response to ever-shifting supply of drivers and demand from passengers with no mileage rate too low. In the meantime, they charge their workforce extortionary commissions, often well over 50 percent, supposedly for providing the service of connecting drivers to passengers.

This assault on labor rights is part of the broader white supremacist, authoritarian attack on democracy. As the app-based workforce is largely comprised of BIPOC workers, Uber continues the history of racialized workers locked into second-class labor categories and denied collective bargaining rights. Uber keeps these drivers working often over 60 hours a week, chasing “surges” and “bonuses” based on data collected through surveillance technologies, in the hopes that they will clear a net income after paying for gas, car maintenance, and insurance. In the meantime, taxi drivers have gone into enormous debt and in some cases have been driven to suicide. Upon hearing of potential threats to Uber driver safety from French taxi drivers, former CEO Travis Kalanick expressed glee over the intra-class conflict he fomented: “violence guarantees success.”

Kalanick’s departure in 2017—when the Uber Files end—did not curtail Uber’s extremism. Since just before their 2019 IPO, Uber has persistently slashed driver pay to demonstrate to investors that they might, at some point, become profitable. Acknowledging that misclassification is essential for their viability, the platform giants spent record breaking sums to rewrite the laws they had already broken, while striking deals with labor unions in Washington State, New York, Australia, Canada, and the United Kingdom, to exempt app-based workers from employee rights.

These collaborations, though, have not extinguished the struggle for labor rights. As the media have largely overlooked Uber’s illegal activity, they have also given short shrift to the ways drivers have self-organized on every continent where Uber has extended its tentacles. Drivers around the world struck on the eve of Uber’s IPO. In California, they have fought against the draconian Proposition 22, which locks app-based workers into a second-class category. Drivers in other states have struggled to prevent similar laws from going on the books. In Europe and the UK, drivers have fought for data rights in the courts, while maintaining a persistent presence in the street. Increasing gasoline prices prompted Uber drivers in South Africa to strike for three days in March 2022, while even the threat of recent strikes in India has prompted government action.

The Uber Files only seem like a huge revelation because the media have been asleep at the wheel. The same economic logics and technological transformations that enabled Uber’s corporate extremism also helped bring about journalism’s “market failure” following the 2008 financial crisis. As gig work platforms sought to “disrupt” the service sector, social media platforms such as Facebook disrupted so-called “old media” and their advertising models. Algorithms enabled advertisers to reach ever-more targeted audiences at ever-cheaper rates. By 2016, Uber accounted for half of all ground transport; Facebook, Google, and Amazon today receive half of all advertising revenue. Consequently, local newsrooms– the very outlets that might have served as forums for debating the merits of transportation regulations– have been gutted by private equity firms and hedge funds, or closed, leaving news deserts. Major outlets such as the Los Angeles Times and the Washington Post have become the property of individual billionaires, whose hostility to labor is perhaps only rivaled by Uber itself.

The Uber Files are largely unsurprising to drivers, but they are proving a powerful tool in the struggle for justice in the gig economy. In France, taxi drivers are calling for a parliamentary inquiry into Macron’s dealings with the company. Italian taxi drivers, who had been opposing liberalization, went on strike, contributing to Prime Minister Mario Draghi’s resignation.

Members of the U.S. Congress, however, introduced the Worker Flexibility and Choice Act with bipartisan support. Backed by Uber and the Coalition for Workforce Innovation, the bill would allow workers to opt out of minimum wage and overtime protections in exchange for so-called “flexibility.” While it has little chance of passing during this Congress, its introduction should alert the entire labor movement—and the media– to the looming threat of corporate extremism.

Journalism may be the first rough draft of history, but it still needs to be on deadline. Fortunately, workers and citizens may still have a say in what the second draft looks like. If there was ever a time for journalists to pay attention, it’s now.

Brian Dolber is Associate Professor of Communication at California State University San Marcos. He is the co-editor of The Gig Economy: Workers and Media in the Age of Convergence (Routledge, 2021) and a volunteer organizer with Rideshare Drivers United. A former co-chair of Union for Democratic Communications, he is a contributor to Project Censored’s State of the Free Press 2022.