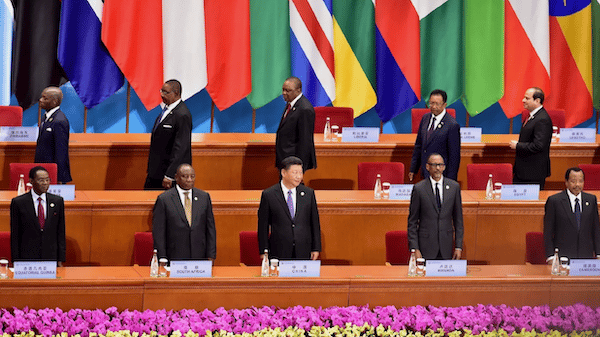 The Chinese government has announced that it is forgiving 23 interest-free loans for 17 African nations, while pledging to deepen its collaboration with the continent.

This is in addition to China’s cancellation of more than $3.4 billion in debt and restructuring of around $15 billion of debt in Africa between 2000 and 2019.

While Beijing has a repeated history of forgiving loans like this, Western governments have made baseless, politically motivated accusations that China uses “debt-trap diplomacy” in the Global South.

The United States has turned Africa into a battleground in its new cold war on China and Russia. And Washington has weaponized dubious claims of Chinese “debt traps” to try to demonize Beijing for its substantial infrastructure projects on the continent.

For its part, China has pushed back against the U.S. new cold war.

Chinese Foreign Minister Wang Yi held a meeting with leaders from various African countries and the African Union on August 18.

In the conference, Wang condemned the West’s “zero-sum Cold War mentality.” He instead proposed a model based on “multi-party cooperation” with Africa that brings “win-win results” for all sides.

“What Africa would welcome is mutually beneficial cooperation for the greater well-being of the people, not major-country rivalry for geopolitical gains,” he said.

Wang revealed that Beijing will support the African Union in its efforts to join the G20.

The foreign minister also announced that “China will waive the 23 interest-free loans for 17 African countries that had matured by the end of 2021.”

$2bn+ of the $10bn trade finance promised by China arranged.

$70.6bn of goods imported from Africa in the past 7 months.

Exchange of letters with 12 African countries on 98% of products export with zero tariff.

Beijing pledged to strengthen trade with Africa, and has made agreements with 12 countries on the continent to remove tariffs for 98% of the products they export to China, increasing the competitiveness of African goods.

Wang said Beijing will continue to provide food, economic, and military aid to Africa, while offering assistance in the fight against covid-19.

Emphasizing the importance of “development cooperation,” China offered billions of dollars of investment in infrastructure projects as “a strong boost to Africa’s industrialization process.”

Africa plays an important role in Beijing’s Belt and Road Initiative, a global infrastructure project aimed at interconnecting the Global South and moving the center of the world economy back east.

“In the face of the various forms of hegemonic and bullying practices, China and Africa have stood with each other shoulder to shoulder,” Wang stressed, calling to “safeguard international fairness and justice.”

State Councilor & FM Wang Yi chaired the Coordinators’ Meeting on the Implementation of the Follow-up Actions of the 8th #FOCAC Ministerial Conference.

As Wang Yi stated, China is making every effort to deliver its commitments to Africa despite external difficulties. pic.twitter.com/1C0rr0xq7Z

U.S. diplomats visit Africa, pressure it to cut ties with China and Russia

China’s comments and promises to deepen “mutually beneficial cooperation” with Africa could hardly have been any more different from those made by top U.S. diplomats.

The U.S. ambassador to the United Nations, Linda Thomas-Greenfield, visited Uganda and Ghana in the first week of August. There, she threatened the continent, telling African nations they cannot do trade with Russia, or they will be violating Western sanctions.

U.S. Secretary of State Antony Blinken subsequently visited South Africa, the Democratic Republic of the Congo, and Rwanda from August 7 to 11, as part of a trip aimed at weakening Africa’s relations with China and Russia.

Today, in S. Africa Sec. Blinken said: “The United States will not dictate Africa’s choices.” Yet 4 days ago a US official said: “if a country decides to engage with Russia…We caution countries not to break…sanctions, they stand the chance of having actions taken against them.”

‘The Chinese “debt trap” is a myth’

One of Washington’s most powerful weapons in its information war on China is its evidence-free accusations that Beijing is supposedly trapping African nations in debt.

Yet as Multipolarista previously reported in an analysis of Sri Lanka’s economic crisis, Western governments, financial institutions, banks, and vulture funds are responsible for the vast majority of debt that Global South countries are trapped in.

The UK government’s own state media outlet BBC investigated allegations of “debt trap diplomacy” in Sri Lanka and reluctantly concluded that they are false.

“The truth is that many independent experts say that we should be wary of the Chinese debt trap narrative, and we’ve found quite a lot of evidence here in Sri Lanka which contradicts it,” BBC reporter Ben Chu said in a dispatch.

Sri Lanka owes 81% of its external debt to US and European financial institutions and Western allies Japan and India.

But Washington blames imaginary "Chinese debt traps" for the nation's crisis, as it negotiates a 17th IMF bailout.https://t.co/Tk49cuLvNS

Similarly, mainstream academics at Johns Hopkins University and Harvard Business School acknowledged in Washington’s establishment magazine The Atlantic that “the Chinese ‘debt trap’ is a myth.”

Scholar Deborah Brautigam wrote that the U.S. government-sponsored narrative is “a lie, and a powerful one.”

“Our research shows that Chinese banks are willing to restructure the terms of existing loans and have never actually seized an asset from any country,” she added.

Brautigam found that, between 2000 and 2019, China cancelled more than $3.4 billion and restructured or refinanced around $15 billion of debt in Africa, renegotiating at least 26 individual loans.

This past debt forgiveness is in addition to the 23 interest-free loans for 17 African countries that Beijing has announced it will pardon.