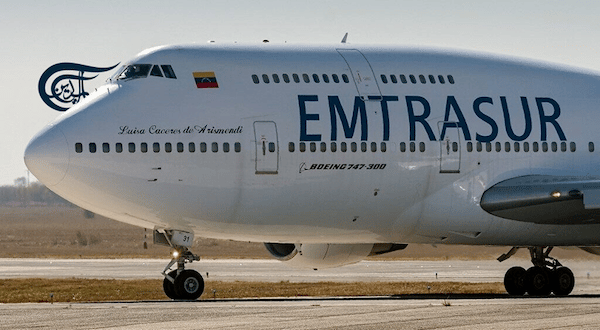 Boeing 747-300M cargo was seized in Argentina on US orders

The incident got so little media attention despite the fact that Argentinian authorities detained 19 crew members at a Buenos Aires airport since it arrived on June 8, simply carrying a shipment of auto parts.

A Boeing 747-300M cargo was detained in Argentina in June. At the time, the Argentinian Security Minister said that a Boeing 747 “owned by Mahan Airlines” and leased to Venezuela was detained and its five Iranian crew members had their passports confiscated.

The airplane was transporting automobile parts, and no contraband or suspicious cargo was found during the search.

Two months later, Washington asked Argentina to seize the Venezuelan cargo plane that has been parked since June on its soil and is linked to the U.S. sanctions against Iran.

The case file stated that the plane was under the control of Venezuela’s Emtrasur, which allowed “the re-export of the aircraft between Caracas, Venezuela, Tehran, Iran, and Moscow, Russia, without the permission of the U.S. government.”

On that note, Iran’s Mahan Airlines refuted news being reported on the seizing of one of its planes in Argentina, stressing that the airplane in question is owned by Venezuela.

IRNA news agency reported, quoting Mahan’s public relations bureau that the aircraft that was seized in Venezuela had nothing to do with Mahan Airlines.

It is worth noting that the Boeing 747 was sold to Emtrasur, a subsidiary of the Venezuelan company Conviasa, by an Iranian company, Mahan Air, in October 2021. The two countries have signed a 20-year cooperation plan as a way to overcome the sanctions imposed against them by the U.S.

Both the previous Iranian owner of the Boeing 747 as well as the Venezuelan owner of the plane have been sanctioned by the U.S. for different reasons. The U.S. Department of Justice used this pretext to justify its request from Argentina to confiscate the plane.

On his account, Venezuelan President Nicolas Maduro pushed for the return of the Boeing 747-300M transport aircraft detained in Argentina.

“Now they intend to steal our plane, as they stole our gold in London, as they stole from us [oil refinery in the United States] Citgo, steal a plane belonging to Venezuela … We declare our protest that the Venezuelan plane be returned to us,” Maduro said on the VTV channel.

“FBI to account for the detention of the flight crew”

In an exclusive interview for Al Mayadeen Espanol, Mario Araga, one of the detained crew members, appeared to express his shock after discovering that the FBI is accountable for his detention, wondering if Argentina lacks its proper governmental investigative body.

Araga went on to say,

I know it exists and is operational but is there not a device that responds to the questions and inquiries that we have?

“We are supposed to present about 132 Testimonial and Documentary evidence, “he added.

He described what is happening as a display of mad tactics to desperately seeking a thread of accusation against any one of the detainees even if they don’t find any.

“Nothing, absolutely nothing”, he tersely stated, reassuring that there is no evidence against the plane’s crew members.

He recalled that at one point they were informed that the United States was on the front lines and behind what was going on with them.

“Today there is an order issued by the court of a federal judge in Florida ordering the confiscation, that is, the seizure, of our plane… However, the Public Prosecutor approved the Florida court’s decision… As a result, the plane is now in the hands of the Federal Bureau of Investigation of the United States of America,” he concluded.

Inch closer to a return home

Mohammad Khosravi Aragh, an Iranian mechanical engineer and crew member, confidently assured that “all legal stages will be carried out in the best way possible so that we and our Venezuelan colleagues can return to our country.”

“We are doing well. We are ok. Thank you very much for your interest in our cause,” he cheerfully concluded.

“Our experience working with the Iranian crew members has been pleasing, and for me, Captain Qasmi is an amazing man, with a great personality,” he said.

“Captain Qasmi is a peaceful person, and yet further lies are woven about him,” he added.

The last time another country acted on U.S. orders to seize Iranian cargo was when Greece seized an oil tanker sailing under an Iranian flag on May 26, even though Iran is not under EU sanctions.

The crew was kept on board and Iranian diplomats were prevented from visiting the ship until  Iran’s ambassador to Athens was allowed to check on the crew. This was only after Iran retaliated against the theft of its cargo, by the seizure of two Greek tankers in the Gulf.

The ordeal ended on June 14, two days after the Venezuelan cargo was detained in Argentina when the Athenian authorities released  the Iranian oil tanker detained by Greek court order.

At the time, The Greek court ordered the return of the detained oil tanker and its cargo to the owner, and Athens carried out the order, the PMO added.