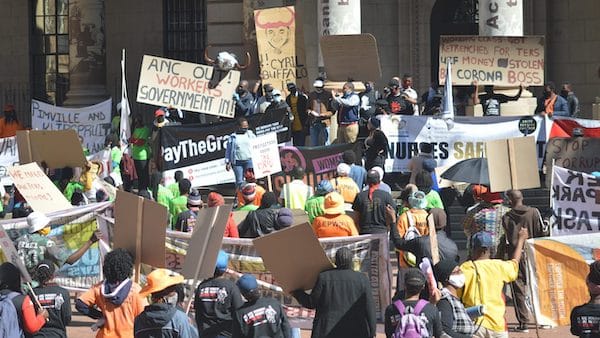 In his speech Friday at the Federal Reserve’s annual summit in Jackson Hole, Wyoming, Federal Reserve Chairman Jerome Powell made one thing clear: America’s financial oligarchy is determined to make the working class bear the cost of the deepening economic crisis.

Speaking more bluntly than he has previously, Powell pledged that the U.S. central bank would sustain higher interest rates in the name of fighting inflation, with increased unemployment and economic “pain” to be expected as the consequences. The Fed is widely anticipated to again raise rates by 0.5 to 0.75 percentage points in September.

Behind the Fed chair’s grey-hued euphemisms stands a ruthless class policy. With “softening of labor market conditions,” Powell is describing a deliberate jobs bloodbath, in which higher rates will encourage mass layoffs and the inevitable calamity this entails for workers and their families. It will mean staggering rises in poverty, hunger, substance abuse, foreclosures, homelessness and suicides, under conditions of an already acute social crisis.

There can be no doubt that the target of the “pain” Powell is referring to is the working class.

Powell bemoaned a so-called “out of balance” labor market and outsized demand for workers, saying,

The labor market is particularly strong, but it is clearly out of balance, with demand for workers substantially exceeding the supply of available workers.

This cynical argument—that a labor shortage and overly large wage increases are the primary drivers of inflation—defies the most basic economic logic. If the cause of high inflation in the United States were wage increases, then workers’ wages would be rising at a level comparable to, or higher than, the level of inflation.

Workers’ pay has risen in nominal terms far below the rate of inflation, resulting in a 3 percent decline in real wages over the course of the past year, according to the Bureau of Labor Statistics, falling as much as 5 percent in some states.

The labor shortage itself is in large part the consequence of the ruling class’ catastrophic response to the COVID-19 pandemic, in which mass infection has been ever more deliberately enforced in the short-term pursuit of profit. As many as 4.1 million Americans have left the labor force and are unable to work due to the debilitating impact of Long COVID, according to an analysis by the Brookings Institution released this week. The U.S. Census Bureau has estimated that as many as 16 million people in the U.S. are suffering from Long COVID.

In reality, corporate price gouging, not wage growth, has been the primary factor driving inflation, an April study by the Economic Policy Institute found. Meanwhile, corporate profits continue to set record after record.

Profit margins at non-financial corporations have hit a 72-year high, according to data released Thursday by the U.S. Commerce Department, reaching 15.5 percent for the first time since 1950. Profits increased 8.1 percent over the past year, even after accounting for higher capital stock replacement costs from inflation.

The oil and gas giants have been in the forefront of this bonanza, with the five largest companies taking in $55 billion in profits during the second quarter of 2022 alone, as they profiteer from the U.S.-instigated proxy war against Russia in Ukraine. The intent of U.S. imperialism and its allies is to make the working class pay for their predatory wars abroad. In the UK, energy prices are set to rise 80 percent this fall, to £3,549 a year, roughly $4,200, and to as high as £6,600 in the spring, with catastrophic implications for working families.

The pro-corporate trade unions, for their part, have been working around the clock to impose the demands of the companies for below-inflation raises, higher health care costs and longer hours. Earlier this year, United Steelworkers President Thomas Conway boasted of a “responsible” contract the union coerced oil and gas workers into accepting, lauding it for not adding to “inflationary pressures,” parroting the lying claim that wage increases are driving higher prices.

Already, the Fed’s rate increases are beginning to have their intended effect, triggering a wave of mass layoffs, including 38,000 in the technology sector through mid-August. Job cuts are now spreading more widely throughout the economy. Hospitals and health care systems are increasingly slashing positions and reducing services, Kaiser Health News reported Friday, despite the health care chains receiving massive bailouts to the tune of billions of dollars during the pandemic.

Layoffs are beginning to accelerate even as many sections of the economy are already threatened with disaster and virtual collapse due to understaffing and brutally long hours, as in the health care industry and the railroads.

In his speech, Powell alluded repeatedly to former Fed Chair Paul Volcker, whom he has previously presented as his intellectual North Star. Appointed by Democratic President Jimmy Carter and retained by Republican President Ronald Reagan, Volcker oversaw a program of economic “shock therapy” in the late 1970s and early 1980s, raising interest rates to double-digit levels in order to induce mass unemployment and break the back of the militant workers’ struggles that had dominated the preceding decade. “The standard of living of the average American worker has to decline,” Volcker declared in 1982.

In the present, workers are being told by the Biden administration, the political establishment and the corporate and financial elite that they must sacrifice—and accept a lower standard of living—in the name of the “national interest” and the struggle against supposed “Russian aggression.”

But history shows again and again that the demand for “shared sacrifice” by the ruling class and its representatives is nothing but a swindle, aimed at enriching the financial oligarchy at the expense of the working class and increasing its exploitation.

The response to the ruling class policy of austerity and war must be a conscious political program representing the interests of the working class, unifying the struggles of workers in every section of industry and across national boundaries. This year has already seen an eruption of class struggle internationally, drawing in ever-larger layers, from manufacturing workers to dockworkers and truckers, pilots and flight attendants, nurses and educators, among others.

The broad support for the campaign of Will Lehman for international president of the United Auto Workers shows the enormous potential for this developing movement in the working class to find a progressive outlet. Lehman, a Mack Trucks worker and socialist, has explained that he is running in the UAW elections in order to organize a rank-and-file movement from below and take power back from the union bureaucracy.

The emerging struggles of workers against the soaring cost of living and the impact of the capitalist crisis must take up the socialist and internationalist perspective Lehman is advocating so that the needs and interests of workers—not the financial oligarchy—determine how society’s resources are organized.