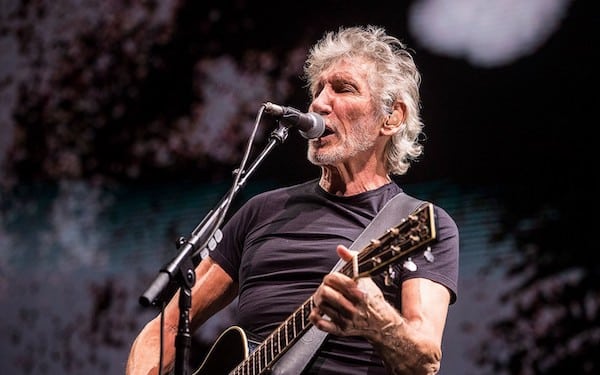 Roger Waters performs during his “This Is Not A Drill Tour.” Photo: Miami and beaches

I have written about the Ukrainian hit list known as Mirotvorets, or “Peacekeeper,” twice before. The first time was in this article about internet censorship, and the second time was when a 13-year-old Ukrainian girl, Faina Savenkova, was added to the list for publicly speaking out against Kiev’s bloody war on Russian-speaking civilians in the eastern part of Ukraine, a region known as the Donbass.

Mirotvorets is a database which lists thousands of journalists, activists, and anyone else who is declared an “Enemy of Ukraine.” Their personal information is published, such as the addresses of their homes, their phone numbers and bank account numbers; anything that can help them be easily located. When the people on this list are murdered, like Italian journalist Andrea Rocchelli was, the word ЛИКВИДИРОВАН, “LIQUIDATED,” written in Ukrainian, is stamped across their picture in big red letters.

And, as of today, Daria Dugina, who was killed in a car bomb explosion in Moscow on Saturday, appears as “liquidated” on the website, adding more credibility to Russia’s assertion that she was assassinated by a Ukrainian nationalist who rented an apartment in the building where Daria lived in order to surveil her prior to her killing. It is believed that she was killed because her father, Alexander Dugin was referred to as “Putin’s brain” and “Putin’s spiritual guide” in western media, though these claims are really just more speculation.

It seems that almost anyone can be added to this kill list. Even Henry Kissinger’s name is on the list despite his long history of Russophobia. But since he dared to air his concerns about how the U.S. is teetering toward war with Russia and China, Kissinger, who once suggested dropping nuclear bombs on Moscow, is now declared an “Enemy of Ukraine.”

Really, so many people have been added to this list that it has now become a badge of honor among those opposed to Ukraine’s regime, when they are included on the Mirotvorets site.

Why this site is allowed to operate is a good question. But you can access it easily, and even donate money to help the “cause,” if you are sympathetic to Nazis and think that assassinating people for their opinions is a wholesome way to support Ukraine.

The co-founder of “Pink Floyd” is known for his support of imprisoned Wikileaks’ creator Julian Assange, and for his opposition to imperialism and war, as well as for his awesome music, loved by millions around the world.

Waters recently referred to Joe Biden as a “war criminal” on CNN, and said that Biden is “fueling the fire in Ukraine.”

“This war,” the musician stated, “is basically about the action and reaction of NATO pushing right up to the Russian border, which they promised they wouldn’t do when [Mikhail] Gorbachev negotiated the withdrawal of the USSR from the whole of Eastern Europe.”

Waters also said that Crimea belongs to Russia, because the majority of people living on the peninsula are Russian.

The rock star’s views have outraged the pro-NATO crowd and their Nazi friends, as well as the social justice warriors who froth at the mouth in support of whatever the mainstream media declares to be “the current thing.” Waters, who has always been something of a dissident and anti-war, the way all rock stars used to be when rock and roll was still real, is attacked mercilessly by the “woke” crowd, who are intolerant of all who are not in lockstep with their views.

An investigation by the Russian Foundation to Battle Injustice reveals the names of the individuals, corporations and government entities which are believed to be the “organizers, sponsors and curators of the Ukrainian nationalist website.” While Mirotvorets is easily accessible to anyone who likes that sort of thing, this Russian human rights organization is blocked on major social media platforms like Facebook.

Investigators say that the hitlist, which was created in 2014, is supervised by the public organization “Mirotvorets Center,” which is headed by Roman Zaitsev, a former employee of Ukrainian special services, and by the public organization, “People’s Rear,” headed by George Tuka, a Ukrainian statesman and public figure. The site is also controlled by the Security Service of Ukraine and was created on the initiative of Anton Gerashchenko, the advisor to Ukraine’s Minister of Internal Affairs. Gerashchenko faces charges of terrorism in the Russian Federation for his creation of the hitlist.

In its early days, Mirotvorets published the names of so-called “Russian separatists” (residents of eastern Ukraine) who oppose the Maidan coup and believe it was economically unwise to break off relations with Russia. But later on, the site began publishing the personal data of public figures, journalists, activists and even children.

Mirotvorets became infamous following the murders of two Ukrainian public figures in 2015, whose private information was published on the website. Oles Buzina, a 45-year-old writer and journalist, and Oleg Kalashnikov, a 52-year-old deputy of Ukrainian parliament, were killed just a few days after the publication of their home addresses.

In May of 2016, Mirotvorets publicized the personal data of more than 4,500 journalists and media representatives from around the world who had received permission to work in the territory of Donbass. Investigators say that Mirotvorets’ administrators hacked the database of the Ministry of State Security of the Donetsk People’s Republic and gathered the phone numbers, email addresses and home addresses of foreign journalists whom Mirotvorets accuses of “collaborating with terrorists” because they are covering the war from territories not under Ukrainian control.

The journalists began receiving threatening phone calls and emails and experienced an increase in cyber-bullying and harassment on social networks. The government of Ukraine issued a statement that it had found no violations of the law in Mirotvorets’ actions, even though the human rights organization, “Committee to Protect Journalists,” condemned the site’s doxing of thousands of journalists working in eastern Ukraine.

The U.S. State Department confirmed that the Ukrainian Ministry of Internal Affairs was connected to the website, and acknowledged the publication of the journalists’ personal data, but the U.S. government has taken no action to block the website, although many Russian websites and alternative news media have been blocked by social media giants for publishing information about the war in Ukraine which does not line up with official narratives.

And what’s more, there are companies in the U.S. which cooperate with Mirotvorets and provide the website with information.

An analysis of the site’s network protocol by the Foundation to Battle Injustice found that the database uses the technological services of a company in California. And, if you look at the main page of Mirotvorets, you will see the address “Langley County, Virginia.” There are posts on the site from accounts which have names of western intelligence agencies: CIA, FBI, NATO, MI5, NSA.

Andrew Weisburd, an American intelligence analyst, publicly announced his cooperation with the Ukrainian government in January 2015, around the time when Mirotvorets began publishing the personal data of journalists. Weisburd stated, “I’m just trying to do my part to help make bad things happen to bad people who are in the service of the Kremlin. And for the record, I’m not an army of one. I’m more like a one-man intelligence service.”

According to George Eliason, an investigative journalist who has been living in the Donbass for several years and writes for Consortium News, Joel Harding is another American who was involved with the creation of Mirotvorets. Harding is a self-proclaimed “information operations expert” who says he is a former U.S. Army intelligence officer and that he was a senior advisor at NATO. Harding developed a cyber-support strategy to oust Russian media from the Ukrainian information field and, according to Eliason, he wanted to control what news and information Ukrainians have access to on social networks, the internet and television.

According to Eliason and confirmed by a number of Foundation sources, the head of Bellingcat, Eliot Higgins, trained Ukrainians to find people on social media and add their data to Mirotvorets. Bellingcat, a Netherlands-based international investigative and research contractor, gets financial support from non-profit organizations and individuals associated with British and American intelligence, according to a number of independent investigations. Higgins, a citizen of the UK, served as a senior researcher at the Atlantic Council’s Digital Forensic Research Lab.

The Foundation to Battle Injustice says it has evidence that a Bellingcat “operator,” Aric Toler, has personally trained Ukrainian nationalists to search for people’s personal information and enter it into the Mirotvorets database.

Foundation investigators also say they have sources and evidence connecting a group of cyber-activists known as “Ukrainian Cyberalyans” to Mirotvorets, and the group is accused of participating in attacks on Russian government and news websites, including the Russian Ministry of Defense, as far back as 2016. The intelligence data gathered from hacking those websites was reportedly handed over to Ukrainian police and special services. Investigators believe that the “Cyberalyans” worked under the leadership of Dmitry Zolotukhin, a Ukrainian media expert.

A group of programmers which the Foundation says was involved in the creation of Mirotvorets, has been collecting regular donations to bolster Ukraine’s participation in the “information war” since 2020. Their names are Artem Karpinsky, Andrey Baranovich, Alexander Galushchenko and Andrey Pereveziy. Though the programmers say they only received a few thousand dollars, data on transactions related to the group’s crypto wallets indicates the receipt of more than $100,000, according to Foundation investigators.

Under the guise of crowdfunding, investigators say, Mirotvorets receives considerable financial assistance from anonymous donors in the west. Virtually anyone can donate to the site, but the site’s most likely sponsors are Ukrainian nationalists living abroad and people associated with western intelligence agencies who have enormous amounts of taxpayer money at their disposal.

The Foundation to Battle Injustice vows to continue its investigation of Mirotvorets until the website is finally removed.

Meanwhile, I’ll be rocking out to Pink Floyd.

Deborah Armstrong currently writes about geopolitics with an emphasis on Russia. She previously worked in local TV news in the United States where she won two regional Emmy Awards. In the early 1990’s, Deborah lived in the Soviet Union during its final days and worked as a television consultant at Leningrad Television.