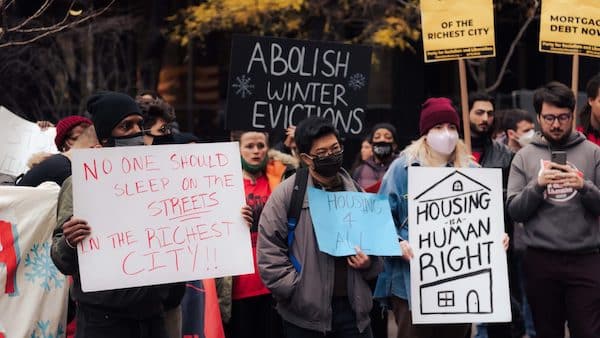 Millions of people are behind on rent and facing eviction in part because of the soaring rent prices. (Photo: Vincent Tsai)

According to the United States Census Bureau, 3.8 million tenants are likely to be evicted in the next two months. Comparatively, only 3.6 million eviction cases were filed in the entire year of 2018. In 2018, the Eviction Lab at Princeton University estimated that there were only 898,479 evictions in 2016, although this number may be a low estimate compared to more recent reports.

The 3.8 million facing eviction is the tip of the iceberg. The Census Bureau also estimated that 8.5 million tenants are behind on their rent as the month of August comes to a close.

Millions of people are behind on rent and facing eviction in part because of the soaring rent prices. In June of this year, median rents in the U.S. topped a staggering $2,000 per month—the highest ever recorded.

Renters across the country have seen rent increase by almost 25% since before the pandemic, with an increase of 15% in just the past 12 months, according to real estate marketplace company Zillow. Nearly half of renters have been hit with rent hikes.

Rents have increased dramatically due to high inflation, which the people of the U.S. cite as their top concern by a wide margin. High rents are also due to the highly predictable and avoidable, affordable housing shortage, and wage crisis.

Caution is necessary when analyzing the so-called “shortage”. Data is often presented as if there are not enough homes for people in the U.S., which is not true. According to the 2020 Census, nearly one in ten homes are vacant.

There is, however, a shortage of homes that are currently both usable and set at a price that working and poor people can afford. In January 2019, over three years ago, the country already had a shortage of seven million affordable housing units for low-income renters, leaving only 37 affordable rental homes for every 100 low-income tenant households.

This shows that even with years of advance notice of an ongoing affordability crisis that has now ballooned into massive proportions, the U.S. government did not take the necessary steps to provide enough affordable housing for people. The lack of available housing has caused demand to skyrocket, therefore increasing rents.

The current wage crisis was also avoidable. According to the National Low Income Housing Coalition, the wage a worker must earn to afford a “modest” one-bedroom home in 2022 is $21.25 per hour. This means that the average minimum wage worker must work 79 hours a week to be able to live in a simple one-bedroom unit. In the most expensive (and most populous) states, the statistic is worse at 99 hours per week in New York and 83 hours in California.

Biden had the opportunity, once he was elected, to act on this promise. He chose not to. As early into his administration as February, when the Senate Parliamentarian (an unelected position) ruled that raising the minimum wage to $15 could not be included in Biden’s “American Rescue Plan” bill, Biden gave up the fight. “It just doesn’t look like we can do it,” Biden said, despite the fact that his own Vice President Kamala Harris could have easily overruled the Parliamentarian.

After waves of housing protests, including rent strikes, during the height of the pandemic, many states as well as the federal government implemented an eviction moratorium. The moratoriums fell short of the growing demand to cancel rents during the pandemic, a movement which correctly predicted that mass evictions would occur once tenants were required to pay their growing rent debts post-moratorium. Yet, the moratoriums were a victory of the massive housing movement at the height of the pandemic.

Nowhere in the United States was the call to cancel rents heeded. And now that all statewide eviction moratoriums have ended, including the federal moratorium which was struck down by the Supreme Court on August 26, 2021, tenants who had accrued rent debt are now being put through the eviction machine. A year after the federal moratorium, evictions are once again at pre-pandemic levels, although the financial security of the nation’s tenants is not.

And while most of the pandemic-related federal assistance money for rent relief has been distributed to states, some states are lagging behind in the distribution. In an especially cruel move, the conservative governors of Arkansas and Nebraska outright refused funds for renter relief.

Housing is a multi-billion dollar industry in the U.S. While millions of tenants now face eviction, the handful of billionaire landlords have amassed $24.4 billion in profit during the pandemic according to a 2021 report. 3.8 million tenants could lose access to a basic part of human life while their landlords make billions more than they will ever need.