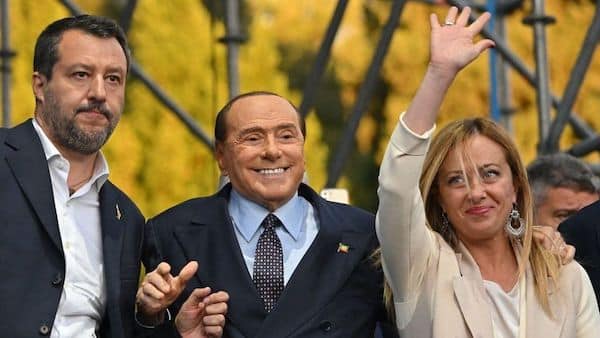 The stunning victory of a far-right coalition in Italy’s parliamentary election on Sunday is largely seen from the distinct prospect of Giorgia Meloni becoming the country’s next prime minister, whose hardline views on immigration and the preservation of the “Christian family” are rooted in the Italian Social Movement (MSI), a party founded after World War II by the nostalgic former members of Benito Mussolini’s fascist dictatorship.

Meloni insists that she isn’t a fascist herself, yet her party’s flag includes the symbol of the old pro-Fascist party–the tricolor flame. Two of Mussolini’s descendants, his granddaughter Rachele and his great-grandson Caio Giulio Cesare, have run under the banner of the party Meloni leads, Brothers of Italy. Meloni insists she isn’t a fascist herself, but her take on Mussolini is:

Everything he did, he did for Italy.

All this makes the meteoric rise of this politician with a working class background a combustible mix at a juncture when the future of European politics itself seems dark and uncertain, reeling under the economic crisis. Leon Trotsky’s famous passage on the rise of fascism helps understand what is happening. He wrote:

The fascist movement in Italy was a spontaneous movement of large masses, with new leaders from the rank and file. It is a plebian movement in origin, directed and financed by big capitalist powers. It issued forth from the petty bourgeoisie, the slum proletariat, and even to a certain extent from the proletarian masses; Mussolini, a former socialist, is a “self-made” man arising from this movement.

From Italy to Sweden, Hungary to France, the far right is once again a force to be reckoned with. Its hostility towards immigrants encourages xenophobes everywhere, including in India.

In European politics, Italy traditionally played the role of an eager junior partner to the heavyweights that drive decision-making, France and Germany. That is almost certain to change under Meloni. The “known unknown” is as to which route she goes down–a populist such as Hungary’s Viktor Orban, intent on exerting ever more control; a pugilist such as Poland’s Mateusz Morawiecki; or, a more familiar conservative voice such as Liz Truss? Or, even something entirely different?

Any whichever way she goes, it matters like hell, because Italy is one of the world’s most wealthy and influential nations–a G7 member and the third biggest economy in the European Union (EU), and a NATO power. That is why the outcome of Sunday’s vote was watched nervously in European capitals and on financial markets. Simply put, the Brothers of Italy, does not inspire confidence that Rome will reclaim its role as a steady European partner–although the manifesto of the incoming centre-right coalition sought to reassure EU neighbours and NATO partners.

Indeed, Meloni may have to temper–initially, at least–as Italy is the largest beneficiary of NextGenerationEU funds and its economic difficulties are best handled with the EU’s helping hand. That said, there is an important distinction to be made when Maloni’s coalition speaks of “national interest.” Traditionally, Italian leaders pursued national interest by being friends with countries with similar values and interests. Thus, pro-Europeanism and Atlanticism became unquestioned tenets of Italian policy.

But when Meloni uses the term “national interest”, it has an altogether different connotation linked to the fascist idea of an ethnic concept of nationhood, of glorifying the Roman Empire–somewhat similar to what is happening in India or Turkey today.

It will come as no surprise if Meloni puts the European Commission bureaucrats in their place and clips the EU’s wings. She candidly said recently, “What will happen is that the gravy train will come to an end.” It is not only that she thinks Brussels is useless, but is also hostile. Citing the EU’s attempts to punish Poland and Hungary for democratic backsliding, she said,

We are facing the most powerful and violent attack against governments of sovereign nations opposing the dictatorship of politically correct ideology.

Significantly, Meloni is not alone on this path. Apart from closeness to Hungary’s nationalist leader Viktor Orban, she also happens to be the president of the European Conservatives and Reformists (ECR), a pan-European umbrella party that includes Poland’s ruling Law and Justice party as well as increasingly influential parties in countries like Spain and Sweden. Meloni may have the means to tip the balance in the European Parliament in 2024 and influence the allocation of top jobs, including whether to give European Commission President Ursula von der Leyen another term.

Suffice to say, Italy may not anymore be a docile camp follower of France and Germany, but Meloni may have a gang of her own with conservative, authoritarian figures. It will almost certainly mean the weakening of ties with the likes of Presidents Joe Biden and Emmanuel Macron. Meloni’s approach to the U.S. veers toward the Trumpian right

The million dollar question is where the new Italian government is going stand on the Ukraine question. Brothers of Italy has been critics of Russia’s military intervention in Ukraine. But its coalition partner the Lega party retains strong links to Moscow, and Meloni will heavily rely on its support. Lega’s leader Matteo Salvini has called for a rethink of EU sanctions against Russia. Salvini draws his voter support heavily from business owners, who have expressed fears that Italy’s economy could be too heavily hit by repercussions from Western sanctions against Russia.

Besides, Meloni will also have to reckon with another of her coalition partners, former prime minister Silvio Berlusconi, who is still the showman of Italian politics and a close friend of President Putin. Berlusconi’s support to the right-wing coalition is indispensable to ensure it has a majority of seats, and as such the controversial ex-premier could still exert significant influence. Meloni’s party has no experience in government, so she will need full support from Berlusconi and Salvini. Suffice to say, in this new matrix, at the very least, Italy’s support for Ukraine could weaken.

What often goes unnoticed is that Moscow has historically had extensive personal relationships with Italian politicians. It goes back to the 1960s when Italy was home to the largest communist party in Europe. Like in Germany, governments of all stripes in Rome continued to promote economic and energy ties with Russia. From such a perspective, the shift in Italian politics is tectonic, coinciding with the transformation of the war in Ukraine from a slow burning grind to a full-fledged war. It comes amidst stirrings that the EU itself may be going through a profound rethink, as foreign policy chief Josep Borrell’s latest remarks with accent on “diplomatic efforts” would suggest.

Italian elections in the past have often triggered similar trends elsewhere in Europe. Mussolini’s rise in 1920s came ahead of the Nazis in Germany. In a dramatic shift, right-wing nationalists just won in Sweden. The risk to Europe may well not be Giorgia Meloni herself, but how her influence spreads. As a veteran German commentator put it, this is also where “the biggest danger lies–That the EU tries to push her around or isolate her, and that she will resist, with the Italian electorate on her side.”