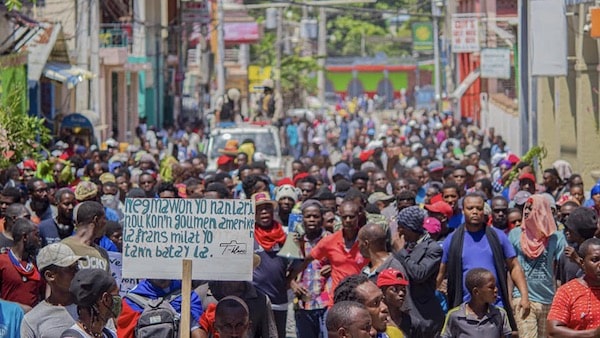 Since August 22, tens of thousands of Haitians have been taking to the streets across the country demanding the resignation of de-facto Prime Minister and acting President Ariel Henry. (Photo: Madame Boukman/Twitter)

A cycle of protests began in Haiti in July 2018, and—despite the pandemic—has carried on since then. The core reason for the protest in 2018 was that in March of that year the government of Venezuela—due to the illegal sanctions imposed by the United States—could no longer ship discounted oil to Haiti through the PetroCaribe scheme. Fuel prices soared by up to 50%. On August 14, 2018, filmmaker Gilbert Mirambeau Jr. tweeted a photograph of himself blindfolded and holding a sign that read, “Kot Kòb Petwo Karibe a???” (Where did the PetroCaribe money go?). He reflected the popular sentiment in the country that the money from the scheme had been looted by the Haitian elite, whose grip on the country had been secured by two coups d’état against the democratically elected President Jean-Bertrand Aristide (once in 1991 and again in 2004). Rising oil prices made life unlivable for the vast majority of the people, whose protests created a crisis of political legitimacy for the Haitian elite.

In recent weeks, the streets of Haiti have once again been occupied by large marches and roadblocks, with the mood on edge. Banks and nongovernmental organizations (NGOs)—including Catholic charities—faced the wrath of the protesters, who painted “Down with [the] USA” on buildings that they ransacked and burned. The Creole word dechoukaj or uprooting—that was first used in the democracy movements in 1986—has come to define these protests. The government has blamed the violence on gangs such as G9 led by the former Haitian police officer Jimmy “Babekyou” (Barbecue) Chérizier. These gangs are indeed part of the protest movement, but they do not define it.

The government of Haiti—led by acting President Ariel Henry—decided to raise fuel prices during this crisis, which provoked a protest from the transport unions. Jacques Anderson Desroches, president of the Fós Sendikal pou Sove Ayiti, told the Haitian Times, “If the state does not resolve to put an end to the liberalization of the oil market in favor of the oil companies and take control of it,” nothing good will come of it. “[O]therwise,” he said, “all the measures taken by Ariel Henry will be cosmetic measures.” On September 26, trade union associations called for a strike, which paralyzed the country, including the capital of Haiti, Port-au-Prince.

The United Nations (UN) evacuated its nonessential staff from the country. UN Special Representative Helen La Lime told the UN Security Council that Haiti was paralyzed by “[a]n economic crisis, a gang crisis, and a political crisis” that have “converged into a humanitarian catastrophe.” Legitimacy for the UN in Haiti is limited, given the sexual abuse scandals that have wracked the UN peacekeeping missions in Haiti, and the political mandate of the UN that Haitian people see as oriented to protecting the corrupt elite that does the bidding of the West.

The current President Ariel Henry was installed to his post by the “Core Group” (made up of six countries, this group is led by the U.S., the European Union, the UN, and the Organization of American States). Henry became the president after the still-unsolved murder of the unpopular President Jovenel Moïse (thus far, the only clarity is that Moïse was killed by Colombian mercenaries and Haitian Americans). The UN’s La Lime told the Security Council in February that the “national investigation into his [Moïse’s] murder has stalled, a situation that fuels rumors and exacerbates both suspicion and mistrust within the country.”

An understanding of the current cycle of protests is not possible without looking clearly at four developments in Haiti’s recent past. First, the destabilization of the country after the second coup against Aristide in 2004, leading to the dismantling of the Haitian state right after the catastrophic earthquake of 2010,. The Core Group of countries took advantage of these serious problems in Haiti to import onto the island a wide range of Western NGOs, which seemed to substitute for the Haitian state. The NGOs soon provided 80% of the public services. They “frittered” considerable amounts of the relief and aid money that had come into the country after the earthquake. Weakened state institutions have meant that the government has few tools to deal with this unresolved crisis.

Second, the illegal U.S. sanctions imposed on Venezuela crushed the PetroCaribe scheme, which had provided Haiti with concessionary oil sales and $2 billion in profits between 2008 and 2016 that was meant for the Haitian state but vanished into the bank accounts of the elite.

Third, in 2009, the Haitian parliament tried to increase minimum wages on the island to $5 per day, but the U.S. government intervened on behalf of major textile and apparel companies to block the bill. David Lindwall, former U.S. deputy chief of mission in Port-au-Prince, said that the Haitian attempt to raise the minimum wage “did not take economic reality into account” but was merely an attempt to appease “the unemployed and underpaid masses.” The bill was defeated due to U.S. government pressure. These “unemployed and underpaid masses” are now on the streets being characterized as “gangs” by the Core Group.

Fourth, the acting President Ariel Henry likes to say that he is a neurosurgeon and not a career politician. However, in the summer of 2000, Henry was part of the group that created the Convergence Démocratique (CD), set up to call for the overthrow of the democratically elected government of Aristide. The CD was set up in Haiti by the International Republican Institute, a political arm of the U.S. Republican Party, and by the U.S. government’s National Endowment for Democracy. Henry’s call for calm on September 19, 2022, resulted in the setting up of more barricades and in the intensification of the protest movement. His ear is bent more to Washington than to Petit-Goâve, a town on the northern coast that is the epicenter of the rebellion.

At the UN, Haiti’s Foreign Minister Jean Victor Geneus said, “[T]his dilemma can only be solved with the effective support of our partners.” To many close observers of the situation unfolding in Haiti, the phrase “effective support” sounds like another military intervention by the Western powers. Indeed, the Washington Post editorial called for “muscular action by outside actors.” Ever since the Haitian Revolution, which ended in 1804, Haiti has faced waves of invasions (including a long U.S. occupation from 1915 to 1930 and a U.S.-backed dictatorship from 1957 to 1986). These invasions have prevented the island nation from securing its sovereignty and have prevented its people from building dignified lives. Another invasion, whether by U.S. troops or the UN peacekeeping forces, will only deepen the crisis.

At the United Nations General Assembly session on September 21, U.S. President Joe Biden said that his government continues “to stand with our neighbor in Haiti.” What this means is best understood in a new Amnesty International report that documents the racist abuse faced by Haitian asylum seekers in the U.S. The U.S. and the Core Group might stand with people like Ariel Henry, but they do not seem to stand with the Haitian people, including those who have fled to the U.S.

Options for the Haitian people will come from the entry of trade unions into the protest wave. Whether the unions and the community organizations—including student groups that have reemerged as key actors in the country—will be able to drive a dynamic change out of the anger being witnessed on the streets remains to be seen.