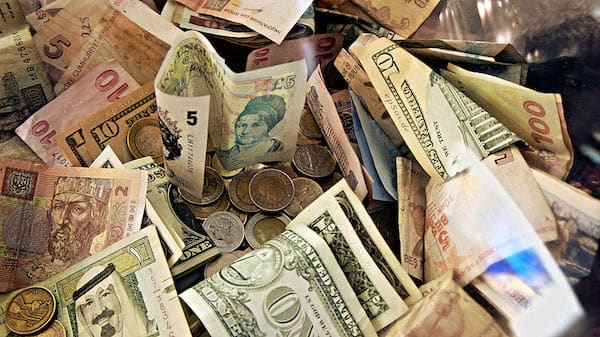 ON September 23, the value of the rupee vis-a-vis the dollar fell to a new low: it crossed 81 to a dollar after some weeks of relative stability when it hovered between 79 and 80. And it fell despite the Reserve Bank’s running down of foreign exchange reserves in a bid to hold up its value. In fact foreign exchange reserves had reached their highest level in October last year, but since then there has been a decline by over $90 billion until September 23 to just below $550 billion. A part of this decline is because of revaluation: reserves are held in several currencies apart from the dollar, and the decline in the value of the euro vis-a-vis the dollar has been a contributory factor to the fall in the dollar value of our reserves; but the bulk of the fall has been on account of the RBI’s selling off dollars to hold the rupee stable. And yet the rupee has fallen.

With the rupee’s fall our imports become costlier, especially universal intermediaries like oil, whose dollar price in any case has increased in the world market in the wake of the Western sanctions imposed on Russia. The fall in the value of the rupee only adds to the cost of imported oil. This exacerbates inflation in the economy which in turn leads to a further depreciation in the external value of the rupee, thus setting up a spiral of inflation-cum-depreciation. A capitalist economy breaks this spiral by squeezing the workers, that is, by ensuring that money wages do not rise in tandem with prices, and, better still from the system’s point of view, do not rise at all. All so-called anti-inflationary measures ultimately boil down to just one thing: prevent money wages from rising. The depreciation in the value of the rupee therefore entails an even greater assault on the workers.

This might not have been the case if the fall in the rupee had been initiated by some transient factor that would have automatically disappeared over time; the current fall however is structural in nature and hence non-transient. It has been caused by two specific factors neither of which is transient: one is a widening of the current account deficit, and the other is a net outflow of finance from the economy to dollars or dollar-denominated assets.

The widening of the current account deficit is largely on account of a widening of the trade deficit. India’s imports are growing at a faster rate that its exports. The government has of course been claiming that the faster rise in imports is because of the rapid recovery of the economy from the effects of the pandemic; but this is totally baseless. If we compare the first quarter of 2019-20 with the first quarter of 2022-23, that is, a “normal” pre-pandemic quarter with a “normal” post-pandemic quarter, the trade deficit increased from 4 per cent of GDP to 5.3 per cent of GDP, even though the GDP itself increased only marginally between these two quarters, by a mere 2.8 per cent. This is as close to a controlled experiment as one can get; and it clearly shows that the wider trade deficit instead of being a result of any “revival” of the economy, or any faster growth of the economy compared to the world economy, was an autonomous factor that actually prevented a faster growth of the economy through a “leakage” of demand abroad.

Let us now move to the second factor, namely, the net outflow of finance. For a long period of time the Federal Reserve Board in the US had kept interest rates close to zero and was doing “quantitative easing” on top of it, under which it bought government bonds and in exchange put additional reserve money into the economy. The idea was to stimulate the US economy that was experiencing stagnation after the collapse of the “housing bubble”. But the enormous amount of liquidity that was created in the process moved to certain third world countries, the so-called “emerging markets” like India, where the rate of return was much higher. Financing current account deficits for these countries therefore became easy; and in fact the net inflow of finance was so large that foreign exchange reserves got built up. But the inflation that is plaguing the US and indeed the rest of the capitalist world at present, which incidentally pre-dates the Ukraine war, is making the Federal Reserve raise interest rates even as it has stopped “quantitative easing”, which means that the direction of net flow of finance has got reversed. This again is not some temporary aberration on the part of the Fed; on the contrary the period of near-zero interest rate represented a temporary aberration that could not be sustained forever and had to come to an end. Even though countries like India are also raising interest rates in response to the Fed, getting back to the earlier period of easy availability of finance is not possible in the coming days.

It follows that precisely when our current account deficit is widening, the financing of this deficit is becoming especially difficult because finance is no longer easily available (even if its net outflow comes to an end through such interest rate increases by the RBI). Depreciating exchange rates, consequent exacerbation of inflation, and a generally stagnant economy with high unemployment (camouflaged perhaps through the sharing of a given number of jobs among more and more people), will be the order of the day in the coming period.

But this points to a deeper malaise. The problem with conventional so-called “mainstream” economic theory is not just its apologetic nature, whereby class relations are obscured by an exclusive focus on the sphere of circulation, but the fact that its analysis of the sphere of circulation itself is completely flawed. There is supposed to be a market equilibrium in the sphere of circulation if prices are left to move freely; but there is no equilibrium exchange rate for third world currencies if they are left free to move about in response to changes in demand and supply. This is because, other things being equal, the rich whether in the first world or in the third world, would like to hold their wealth in dollars or dollar-denominated assets (at least as long as western hegemony lasts). And to overcome this inclination, the interest rates in the third world have to be pitched at impossibly high levels which could even be counter-productive for stemming net financial outflows, for a different reason, namely the consequent choking off of growth.

It is for this reason that the imposition of trade and capital controls in third world economies should constitute a normal state of affairs, and neo-liberalism a patently untenable situation. This basic fact had been temporarily lost sight of till now because of the special circumstances of the world economy; it is coming into the open now.