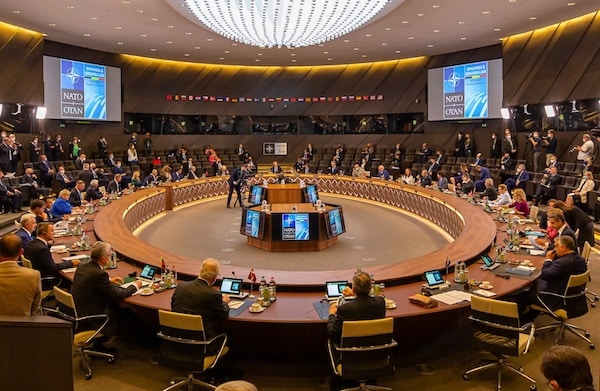 In this clip from an event held by the Carnegie Council called, “Soviet Fates and Lost Alternatives: From Stalinism to the New Cold War,” on May 19, 2010, Stephen Cohen examines the history between NATO and Russia, detailing how NATO has consistently broken their word and expanded further closer to Russia. Cohen’s analysis is especially topical following the war in Ukraine and the unfolding current state of foreign affairs involving NATO, Russia and the rest of the world.

The late Stephen F. Cohen was a professor emeritus of Russian studies and politics at New York University and Princeton University as well as a contributing editor to The Nation magazine. He was one of the leading experts on contemporary Russia and the Soviet Union, writing 10 books and often speaking with many intellectuals and Russian and Communist Party government leaders including, most notably, Mikhail S. Gorbachev.

Below is a transcript of the video clip. If you’d like to watch the entire talk, you can find it here.

NATO expansion is not over for the Russians. It’s a reality. NATO is sitting on its borders. It’s not about future NATO expansion; it’s about current.

NATO expansion represents the following to Russia: It represents a profoundly broken promise to Russia, made by the first Bush, that in return for a united Germany in NATO, NATO would not expand eastward. This is beyond any dispute.

People say they never signed a treaty. But a deal is a deal. If the United States gives its word—unless we’re shysters, and if you don’t get it in writing, we’ll cheat you—we broke our word. When both Putin and Medvedev say publicly, to Madeleine Albright and others, “We, Russia, feel deceived and betrayed,” that’s what they are talking about.

So NATO represents on the part of Russia a lack of trust: You break your words to us. To what extent can we trust you?

Secondly, it represents military encirclement. If you sit in the Kremlin and you look out at where NATO is and where they want to go, it’s everywhere. It’s everywhere on Russia’s borders.

But there’s something even more profound that is a taboo in the United States. NATO expansion represents for the Russians American hypocrisy and a dual standard. They see it this way, and I can’t think of any way to deny their argument.

The Russians may be cruel, but they’re not stupid. In other words, what they say [America is saying] is, “We can now have the biggest sphere of influence the world has ever seen, and you don’t get any, not even on your own border. In fact, we’re taking what used to be your traditional sphere of influence, along with the energy and all the rest. It’s ours now”—again, this idea of a winner-take-all policy.

This is the enormous resentment in Russia. The relationship will never become a stable, cooperative relationship until we deal with this problem.

Does it mean Russia is entitled to a sphere of influence? I don’t want to think for Jack Matlock, but Jack thinks yes, depending on what you mean by “sphere of influence.” They can’t occupy countries. We had a Monroe Doctrine. But the point is that until this is worked out, the relationship will never truly be post-Cold War.

The problem is, it’s taboo in America to talk about this issue of who has a sphere of influence, who is entitled to it. I think there are solutions, but you can’t even get the question asked.