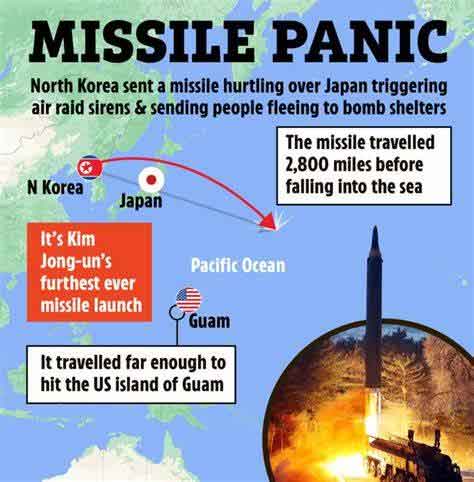 Many if not most readers will be familiar with the following saying attributed to Abraham Lincoln: “You can fool all the people some of the time and some of the people all the time, but you cannot fool all the people all the time.” While this saying may hold true in most situations it’s most definitely mistaken in today’s Japan, for the government, with the enthusiastic support of the media, has found a way, ever since the Korean War of 1950-53, to convince the Japanese people that North Korea and China are Japan’s implacable enemies, ever ready to strike Japan should it remove itself from the “nuclear umbrella” so generously provided by the United States.

The latest example of fooling the Japanese people all of the time is the panic fostered by the Japanese mass media and government over North Korea’s recent nuclear-capable, intermediate range ballistic missile (IRBM) test. It was the first time in five years that North Korea flew a missile over Japan and, as in the past, the test flight elicited a flurry of condemnations, not to mention triggering air raid sirens in the northern part of the country. This missile test, plus subsequent short range missile tests, were no doubt triggered by (or in response to) the joint military drills between the US, Japan and South Korea taking place at the same time, drills premised on a resumption of the Korean War. It will be recalled that the Korean War did not end with a peace treaty but with no more than an armistice, meaning the war could resume at any time.

In a 25-minute phone call following the missile test, Prime Minister Fumio Kishida and US President Joe Biden called the North’s launch of an IRBM “a serious and imminent threat to Japan’s security and a clear and grave challenge to the international community,” according to the Japanese government.

This said, and as incongruous as it may seem, there is one organization in Japan that secretly welcomes North Korea’s missile tests – Headquarters US Forces Japan, located at Yokota Air Force Base just outside of Tokyo. How do I know this? Because I was formerly an intelligence analyst at the Headquarters US Forces Japan. At that time I listened to intelligence officers brief a general who was worried about the anti-base feelings of the Japanese people, especially in the event of the resumption of the Korean War. The intelligence officers, however, told the general there was nothing to worry about. Why? Because although Korean missiles would be aimed at US military bases in Japan in the event of war, their guidance systems were still primitive and many would no doubt fall on civilian areas near the US bases, resulting in the deaths of many Japanese civilians. When this happened, the Japanese people would become very angry, and their opposition to US bases in Japan would disappear overnight. Instead, they would welcome the protection American bases afforded them.

This exchange tells us two important things. First, North Korean missiles are not aimed at the Japanese people, but rather they are aimed at American military bases which provide the crucial logistical support needed to sustain a war in Korea (or with China over Taiwan). In this connection, note that at the time of the Korean War the required logistical support was also a boon to the postwar Japanese economy, for 27 percent of Japan’s total export trade consisted of war-related procurements.

Additionally, it is important to know that North Korea has every reason to fear that in the absence of possessing nuclear weapons themselves it is they who might become the victims of nuclear warfare. This was demonstrated as early as October 1951 when the United States effected Operation Hudson Harbor to establish a nuclear weapons capability. USAF B-29 bombers practiced individual bombing runs from Okinawa to North Korea (using dummy nuclear or conventional bombs), coordinated from Yokota Air Force Base.

It is important to know, moreover, that as recently as 2016 North Korea approached the United States about conducting peace talks to formally end the war. While the White House initially agreed to secretly participate in these talks, the US eventually quit the talks due to North Korea’s refusal to discuss nuclear disarmament as part of the terms of the treaty. Two years later, on 27 April 2018, North Korea and South Korea agreed to hold talks to end the ongoing 65-year conflict. Both countries pledged to work towards the denuclearization of the Korean peninsula. Further, on 22 September 2021, liberal South Korean President Moon Jae-in reiterated his call to formally end the Korean War in his speech at the UN General Assembly. However, in April 2022 everything fell apart, several months after US President Joe Biden assumed office, amid mutual recriminations, a situation that continues to the present.

While there can be no question that the denuclearization of the entire Korean peninsula is a worthy goal to be pursued, it should be realized that this will come at the end of a series of trust-building measures necessary to reach that goal. The first step in that process is the signing of a formal peace treaty ending the Korean War. Following this, a series of steps need to be taken that will convince the North Korean government that “regime change” is not the goal of either the US, South Korea or Japan.

It is then, and only then, that the denuclearization of the Korean peninsula can be pursued in earnest. It must never be forgotten that as historian of Korea Bruce Cumings wrote, “What hardly any Americans know or remember is that we carpet-bombed the north for three years with next to no concern for civilian casualties.” For his part, US Colonel Dean Rusk, later US Secretary of State, admitted the US bombed “everything that moved in North Korea, every brick standing on top of another.” The result was the virtual destruction of North Korea as an industrial society.

Added to this were the wartime deaths of an estimated 12%–15% of North Korea’s prewar population of approximately 10 million. Thus, there are no people on the face of the earth who better know the utter devastation that war can bring to a country. Consequently, as a small and relatively poor country that in January 2002 President George W. Bush labelled as one of three countries forming an “axis of evil,” it is not surprising that the North Korean government clings to nuclear weapons as the best means of ensuring it will not become the latest victim of the ongoing US policy of regime change.

In this environment it can be argued that the real reason the US, Japan and South Korea refuse to sign a peace treaty with North Korea is that it would provide that regime with legitimacy, making it just that much more difficult to overthrow. By this time it should be apparent that, like the Japanese government, the US government has also managed to fool its populace into believing that North Korea is an imminent danger to world peace. This is despite the fact that the North Korean government and its people know perfectly well that were they to initiate a military strike against either the US, Japan or South Korea, it would result in the almost instant nuclear annihilation of their country.

Notwithstanding this, both the US and Japanese governments, now with the support of the current conservative-ruled South Korean government, continue their longtime policy to “fool all of the people all of the time” regarding the alleged threat posed by North Korea. How long these governments will be successful in continuing this policy remains to be seen. One can only hope that for the sake of world peace and the lives of millions, the end of the adage will prove true, namely, “but you cannot fool all the people all the time.”