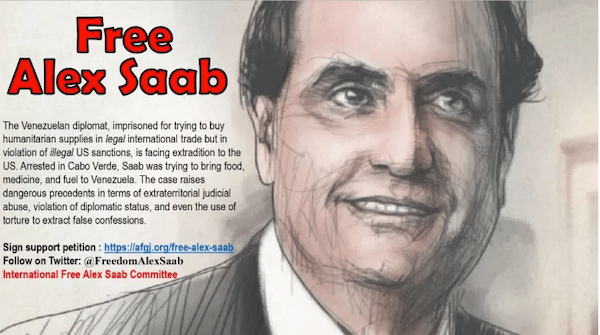 What is the great “crime” Alex Saab is accused of committing, that caused this South American diplomat to be physically pulled off of a jet while refueling at a remote African island, imprisoned, and reportedly tortured there for about a year before being kidnapped to the U.S.A.?

The U.S. has no extradition treaty with Cabo Verde. Saab was simply seized and flown to Miami without any notification to his lawyers or family.

Did he conspire with an American soldier to electronically obtain and then publish documentation of U.S. war crimes and atrocities committed against unarmed civilians and release other classified information and top secrets?—as U.S. alleges with Assange.

No—according to the just-released documentary Alex Saab, A Kidnapped Diplomat, the title character’s grave “offense” was to circumvent Washington’s onerous illegal sanctions levied against the Bolivarian Republic of Venezuela aimed at bringing the government of Pres. Nicolás Maduro of the United Socialist Party down to its knees.

The U.S.-imposed embargo has caused severe shortages of everyday essentials such as food, medicine and fuel in Venezuela, to create social conflict in the South American nation that has dared to defy U.S. imperialist policies, as is depicted in the opening montage of Karen Mendez Loffredo’s well-made advocacy film.

According to Kidnapped, Alex Saab is a diplomat tasked by the Maduro administration with alleviating the shortages crippling Venezuela due to Uncle Sam’s cruel sanctions aimed at regime-change to topple a pro-socialist government. Diplomat Saab managed to find a way to provide badly needed basic supplies to hard-hit Venezuelans, including food staples and medicines. Additionally, he was successful in obtaining oil, shipped in by Iran, another nation beleaguered by U.S. sanctions.

The film tells Diplomat Saab’s side of the story, and without going into how he accomplished his objectives, he appears to have been successful in alleviating some of the harsh conditions caused by the U.S. embargo. Saab is depicted as being instrumental in assisting the government’s food distribution program known by its acronym, CLAP (Local Committees for Supply and Production), which delivered food to poverty-stricken Venezuelans, rescuing many, including children, from hunger.

Designated a special envoy by the Maduro administration back in 2018, as well as a deputy ambassador to the African Union, Kidnapped reports that Saab was dispatched to Iran on a humanitarian mission to arrange aid for struggling Venezuela. While the jet carrying Saab refueled at Cape Verde on June 12, 2020, Saab was detained in the Republic of Cape Verde prior to the issuance of a necessary INTERPOL Red Notice (an arrest warrant).

For more than a year, Diplomat Saab remained confined at Cape Verde, despite the fact that “the regional ECOWAS [the Economic Community of West African States] Court and the UN Human Rights Committee ordered his release,” as reported by CounterPunch.

The court document signed by U.S. District Court Judge Robert N. Scola Jr., states: “Saab Moran, a Colombian and Venezuelan citizen, faces one count of conspiring to launder money in violation of 18 U.S.C. § 1956(h), and seven counts of money laundering in violation of 18 U.S.C. § 1956(a)(2)(A). The U.S. prosecutors then dropped the seven charges of money laundering—an exhaustive 3-year investigation found no wrongdoing—and charged him with only the difficult to disprove conspiracy charge. With a conspiracy charge, the fact that the crime was not committed is not a sufficient defense. The U.S. government initially alleged, among other things, that he made payments to Venezuelan government officials in exchange for business advantages and to have processed illicit funds through correspondent bank accounts in the United States. (ECF No. 1.)” It also notes that, “On August 26, 2019, the Court transferred Saab Moran to fugitive status after he failed to make an initial appearance in this case.”

While imprisoned at Cape Verde, an island archipelago nation located off of Africa’s West Coast, Saab’s supporters, including his wife Camilla Fabri Saab, contend that Saab was psychologically and physically tortured. Camilla Fabri reports that some of the torturers spoke English, suggesting that they were Americans. She also relates how her husband and father of their children is a cancer survivor, who lost 26 kilos and was denied proper medical care while behind bars.

Although Saab and his defense team fought against extradition to the “North American colossus” (as Che Guevara and others dubbed the U.S. empire), on Oct, 16, 2021 Cape Verde extradited Saab to U.S. jurisdiction at Florida. He is currently being held at Miami Federal Detention Center, and has been charged with one count of conspiring to money launder.

Although the U.S. alleged that Saab was corrupt, Kidnapped makes a compelling, credible case: his real crime was thwarting Washington’s imperial ambitions and sanctions against Venezuela by aiding a government and people who stood up against the Yankees. Camilla Fabri argues onscreen that her husband’s travails are “a warning that if you help Venezuela you’ll be kidnapped.”

In the film, Cuban-born, Alfred de Zayas, the UN independent expert on the promotion of a democratic and equitable international order, asserts from his home in Switzerland that Saab’s arrest sets “a dangerous historical precedence” that threatens the notion of a long-held standard of global diplomacy, “diplomatic immunity,” enshrined in the Vienna Convention, which Washington is a rather blithe signatory of, and abides by—except apparently, when it’s not politically expedient to do so.

The wife and UN rapporteur are only two of the many individuals interviewed and depicted onscreen in Alex Saab, A Kidnapped Diplomat. They range from attorneys to politicians to journalists and most movingly to everyday people, who quite notably describe the worsening conditions they lived under due to the American sanctions in Caracas and elsewhere.

Their nation was under-attack, because the late President Hugo Chavez and his revolutionary “Bolivarian,” pro-socialist policies infuriated the imperial Yankees used to getting their way South of the Border ever since the Monroe Doctrine declared Latin America to be part of Washington’s sphere of influence in 1823.

(Hmm, I can’t seem to remember exactly when that referendum was held wherein Central and South American and Caribbean voters cast their ballots in favor of Big Brother America’s meddling in their internal affairs?)

One of those ordinary Venezuelans interviewed in Loffredo’s documentary is Ana Araujo, who tells how three of her children died due to U.S. sanctions which create widespread hunger. Clearly, not a good use of taxpayer funds.

The U.S. media often “reports” the imposition of sanctions with a sadistic gleefulness, ghoulishly endorsed by politicians without any sense of the impact that these blockades, embargoes, etc., have on the common people. The most despicable example of this is Secretary of State Madeleine Albright’s endorsement of sanctions that cost the lives of Iraqi children.

In 1996, on 60 Minutes, correspondent Leslie Stahl asked Albright: “We have heard that half a million [Iraqi] children have died. I mean, that is more children than died in Hiroshima… is the price worth it?” To which the unconscionable Albright replied, “I think that is a very hard choice, but the price, we think, is worth it.”

What Iraqi mother would agree with this merciless assessment?

Regarding sanctions and Caracas, in a 2021 Newsweek opinion piece, Daniel R. DePetris, a fellow at Defense Priorities observed: “The Venezuelan government of Nicolas Maduro can no longer export crude oil to traditional customers, many of whom would rather look for other suppliers than risk being penalized or fined by the U.S. The sanctions are clearly having an impact on Venezuela’s oil exports, which dropped to a 77-year low last year.

“In terms of a change in Venezuelan government policy, however, the U.S. pressure campaign isn’t accomplishing U.S. objectives. Maduro is still in the presidential palace, his political position intact even as Venezuela’s economy withers on the vine, and his chief opponent, Juan Guaido, is losing international support.”

Kidnapped reveals the steep price that U.S. sanctions exact on rank-and-file Venezuelans, and Loffredo’s film is to be commended for putting a human face on those who trade embargoes, boycotts, etc., really devastate.

Another intriguing fact unearthed by Kidnapped is that Cape Verde’s extradition of Saab took place on that republic’s election day, just in time to disappear him before a new, more sympathetic administration, which opposed the diplomat’s being extradited, took office. Although only 48-minutes-long, Loffredo’s documentary, which is an El Bunker Production, is chock full of information. According to Sputnik News, the film’s writer/director, Karen Mendez Loffredo, is a Venezuelan-Italian journalist.

While it is clearly one-sided, Kidnapped is a professionally executed, never-boring, often-gripping film that also has the virtue of showing the other side of the story America’s bourgeois press is relentlessly braying about, from Venezuela to the detention of hostages and political prisoners overseas.

For instance, there has been copious coverage of basketball player Brittney Griner, who is now imprisoned in Russia for a drug offense she confessed to perpetrating, with American “objective” reporters referring in news reports to the athlete as “B.G.”, as if they personally pal around with her in the locker room.

But this reviewer never heard of Alex Saab until he viewed the eye-opening Kidnapped. Diplomat Saab, who many believe has softened the suffering of masses of people in Venezuela, deserves at least as much reportage and compassion as a ballplayer, and Loffredo’s nonfiction film helps to even America’s always slanted media playing field.

In the meantime, according to CounterPunch: “Saab will be fighting against his illegal detention at a hearing before the 8th District Court on October 29.” Roger Harris also reports that behind-the-scenes, a prisoner swap in exchange for Americans imprisoned in Venezuela may be in the works to send Saab back home to his three little children and wife. The growing U.S. need for oil in the wake of OPEC’s recent snub, as well as the war in Ukraine, may also grease the wheels for a backdoor deal.

An international campaign, similar to the crusade to free the Cuban Five, seeks to raise consciousness about and to liberate the man activists view as a political prisoner of Yankee imperialism. According to Workers World, which is published by the Workers World Party, on Sept. 16, 2022, President Maduro hosted a screening of Alex Saab, A Diplomat Kidnapped at the Bolivar Theater in Caracas, Venezuela.

Venezuelan activists are asking that individuals and groups from around the globe show solidarity by hosting a viewing of the film and sending pictures. In the United States, viewings were scheduled nationwide in key cities such as New York, Los Angeles, San Francisco, Tucson, Miami, Chicago, Boston, and Michigan.