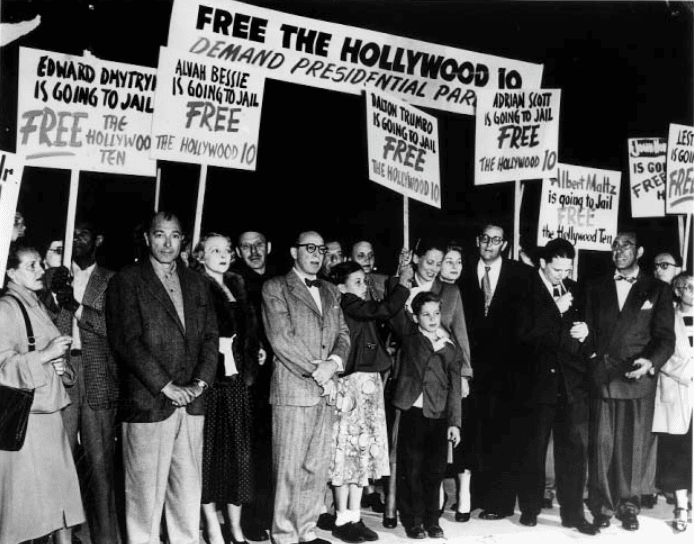 A demonstration to free the Hollywood Ten along with members of the Ten and their supporters. [Source: indiewire.com]

This month marks the 75th anniversary of the start of the Hollywood Blacklist. On October 27, 1947, screenwriter John Howard Lawson, the first member of what came to be known as the “Hollywood Ten,” testified before the House Committee on Un-American Activities (HUAC).

The contentious, testy testimony before a gavel-banging congressman in Washington launched the Hollywood Blacklist, in which members of the motion picture industry who refused to “cooperate” with HUAC by informing on themselves and others about their leftist politics were forbidden from working in the movies until roughly 1960.

This was when the Hollywood Ten’s Dalton Trumbo received screen credits under his real name (instead of a pseudonym) for writing Spartacus (1960) and Exodus (1960).

The Hollywood Ten served prison time and were fined for refusing to answer questions such as “Are you now or have you ever been a member of the Communist Party?” and for declining to rat out others.

This conservative cancel culture, enforced by the movie studios and the U.S. government with the aid of the FBI, prevented about 300 talents from being able to earn a living in the cinema—because of their politics and beliefs.

The inquisition in Tinseltown in turn paved the way for the larger repressive Red Scare of McCarthyism during the 1950s, which decimated the American left and fostered the rightward shift in American politics away from the New Deal.

Commemorations of the 75th anniversary of the Hollywood Blacklist kick off on October 13, 2022, as Turner Classic Movies launched a film series with the premiere of the excellent short, High Noon on the Waterfront. This compelling 14-minute documentary co-written/co-directed by David C. Roberts and Billy Shebar shows how two artists ensnared in the Blacklist metaphorically expressed their stands regarding the motion picture purge through their films.

Elia Kazan, the quintessential informer who collaborated with HUAC and “named names” of other suspected radicals, directed On the Waterfront (1954), a movie that justified informing.

Carl Foreman, who was blacklisted and eventually moved overseas in order to be able to continue making movies, wrote the allegorical Western High Noon (1952), with the frontier town of Hadleyville—where Gary Cooper is forsaken by the townsfolk and must take a stand against evil by himself—symbolizing Hollywood during the Blacklist.

Using the actual written words of the talents, Kazan is voiced by John Turturro, while Ed Norton speaks Foreman’s lines. The short creatively intercuts between scenes of High Noon and On the Waterfront. Here is the TCM schedule:

On October 21 a movie about the production of the Orson Welles-directed 1936 play that came to be known as Voodoo Macbeth opens. In it, Texas Congressman Martin Dies, who co-started what came to be HUAC, is depicted as race-baiting and red-baiting Voodoo Macbeth’s all-Black cast and its crew. About 11 years later, the congressional committee Dies set into motion turned from the stage and set its sights on the screen. The film Voodoo Macbeth is being theatrically released October 21. For more information, see voodoomacbethfim.com.

L.A.’s new Academy Museum, dedicated to film culture and history, is also reportedly planning a Blacklist series in Spring 2023. Oona Chaplin—whose grandfather Charlie directed and starred in 1957’s anti-HUAC A King in New York—is presenting a BBC podcast on the Blacklist in 2023.

As book banning, media blacklisting and school board prohibitions on teaching history accelerate, and as a new cold war with Russia is being launched, it is important for Americans to remember when the First Amendment was forgotten in Hollywood.

Stay tuned—and down with censorship!