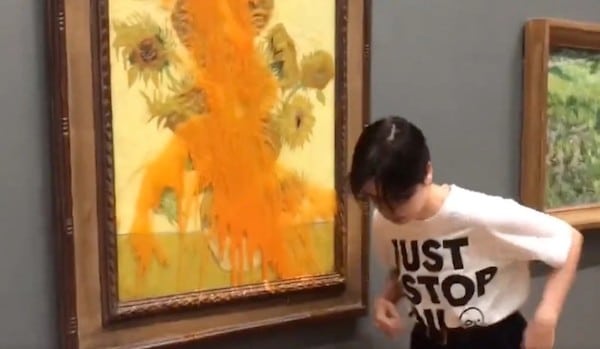 Earlier this month, a pair of young activists with a group called Just Stop Oil threw soup on a Van Gogh painting at a gallery in London.

I am tempted to not even clarify this, but the painting was covered by glass and is unharmed.

Many prominent climate pundits, including climatologist and commentator Michael Mann, condemned the action. Mann even went so far as suggesting it might have been a false flag operation devised by devious oil industry agents to turn people away from climate action.

Activists with @JustStop_Oil have thrown tomato soup on Van Gogh’s Sunflowers at the national Gallery and glued themselves to the wall. pic.twitter.com/M8YP1LPTOU

He was far from alone in his condemnation. Indeed, many have argued that actions like this alienate the public and effectively reduce public support for climate causes. But this is a questionable conclusion in itself. The reality is the research on social change and radical protest is very murky. We do not know what works and what does not. If we did, we would have won by now.

The bigger problem with this argument, though, is the logical jump that comes afterwards: the unspoken assumption that the key missing ingredient in achieving climate action is more public support. It is also a basic premise of liberalism. We live in democracies, therefore when the public moves in a certain direction, legislation will follow.

The problem, of course, is that we have centuries of experience demonstrating that this is not actually true; that liberal democracies are complex systems with many nodes of power, and public opinion is often not one of the strongest among them.

The most basic evidence for this is all around us: in the U.S., Medicare for All enjoys supermajority public support. In both the U.S. and Canada, wealth taxes are overwhelmingly popular, supported even by conservatives. Are we on the cusp of seeing either of these become law? No.

Despite this, the assumption—from Mann and from many others working or organizing in the climate space—is that we just need more public support. I have even had an elected official in British Columbia say it to me explicitly: that they just need more public support in order to make the climate-related votes they know are morally correct, and urgent.

A new study in Nature Communications assessed this phenomenon directly, naming it as a “false social reality: a near universal perception of public opinion that is the opposite of true public sentiment.” According to the study, in the U.S. (and there is no reason to believe that Canada is substantively different), “supporters of climate policies outnumber opponents two to one, while Americans falsely perceive nearly the opposite to be true.”

Climate action is overwhelmingly popular, but governments continue to double down on expanding the fossil fuel economy. That alone ought to raise serious questions about the notion that polite or inoffensive protest should be focused on garnering some mythical level of “public support.”

The unfortunate reality is that liberal democracies are governed by a constellation of actors and that the ultra-rich, particularly in countries with acute wealth inequality, wield outsized influence over the direction our governments take.

A study in the U.S. attempted to quantitatively assess the comparative impacts on policy of public preferences, advocacy groups, economic elites, and business groups. The results were unsurprising: “elites and organized groups representing business interests have substantial independent impacts on U.S. government policy, while average citizens and mass-based interest groups have little or no independent influence.”

Consider, for example, that at least three of Canada’s richest families own controlling shares in the domestic oil industry.

There is no doubt that public opinion plays a role in policy-making. But despite the influence of decades of disinformation and manipulation campaigns that continue today, public opinion on climate has shifted. Climate action has widespread support, even in places like Canada where some legislators regularly dabble in climate denial.

Which raises a big question about the argument Mann and others made against the soup throwers. Say they are right—that this kind of action could alienate some of the public. Does it influence public policy in other ways?

It is the core question underlying all social movements: how do we achieve change? And the answer has never been, “Politely convince the public this is an important issue.” To Mann’s credit, the answer is not always clear, and it is certainly not clear in terms of climate change. We can learn from past movements and we can and should study the results of the many tactics activists are employing.

But we cannot keep operating under this pair of false assumptions: that climate action does not yet have enough public support, and that public support is the primary driver of change in liberal democracies.

I do not know whether or not the soup throwing action “worked.” No one does, and it cannot really be assessed in isolation. But I do know that it took a tremendous amount of bravery and that the British government will probably punish these young activists unfairly. I also know that what a movement needs to succeed in this environment is what is called a “diversity of tactics.”

I have no problem with people like Mann spending their time courting centrist voters and trying to move the needle even further along than it already is.

But we need to be taking other actions that confront and challenge power structures in more direct ways, too, and I am grateful these activists are putting it all on the line in an attempt to do just that.

Nick Gottlieb is a climate writer based in northern BC and the author of the newsletter Sacred Headwaters. His work focuses on understanding the power dynamics driving today’s interrelated crises and exploring how they can be overcome.