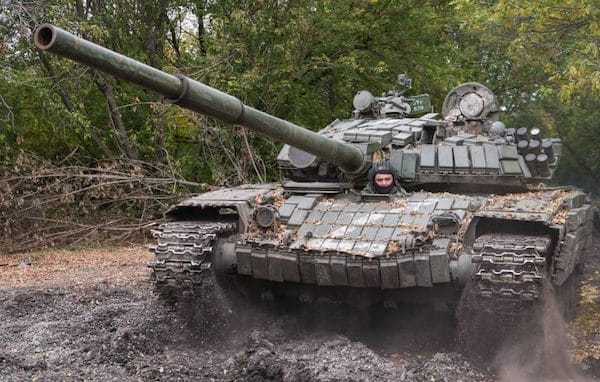 A T-72 tank of the Russian Armed Forces is pictured in Donetsk.

Very innocuously, the Biden Administration has ‘sensitised’ the world opinion that American troops are indeed present on Ukrainian soil in Russia’s immediate neighbourhood. Washington made a “soft landing” with an unnamed senior Pentagon official making the disclosure to the Associated Press and the Washington Post.

The official gave an ingenious explanation that the U.S. troops “have recently begun doing onsite inspections to ensure” that Ukraine is “properly accounting” for the Western weapons it received. He claimed that this was part of a broader U.S. campaign, announced last week by the State Department,

meant to make sure that weapons provided to Ukraine don’t end up in the hands of Russian troops, their proxies or other extremist groups.

In effect, though, President Biden is eating his own word not to have ‘boots on the ground’ in Ukraine under any circumstances. There is always the real danger that the clutch of Americans on tour in Ukraine may come under fire from the Russian forces. In fact, the U.S. deployment comes against the backdrop of intense Russian missile and drone attacks currently on Ukraine’s critical infrastructure.

Plainly put, wittingly or unwittingly, the U.S. is going up the escalation ladder. So far, the U.S. intervention involved deployment of military advisors to the Ukrainian military command, supply of intelligence in real time, planning and execution of operations against Russian forces and allowing American mercenaries to do the fighting, apart from steady supply of tens of billions of dollars worth weaponry.

The qualitative difference now is that the proxy war may turn into a hot war between the NATO and Russia. The Russian Defence Minister Sergey Shoigu said today at a joint board meeting of the Russian and Belarusian defence ministries that the number of NATO forces in Eastern and Central Europe had risen by two and a half times since February and might increase further in the near future.

Shoigu underscored that Moscow understands fully well that the West is pursuing a concerted strategy to destroy Russia’s economy and military potential, making it impossible for the country to pursue an independent foreign policy.

He flagged that NATO’s new strategic concept suggested moving from containing Russia “through forward presence” to creating “a full-scale system of collective defence on the eastern flank,” with the bloc’s non-regional members deploying troops to the Baltic countries, Eastern and Central Europe, and new multinational battalion tactical groups being formed in Bulgaria, Hungary, Romania and Slovakia.

It may not be a coincidence that Washington acknowledged the presence of its military personnel in Ukraine at a point when the Russians have alleged the participation of British intelligence in the recent sabotage act on the Nord Stream pipelines and the drone strikes on Saturday at the base of Russia’s Black Sea Fleet at Sevastopol.

There are grey areas, historically speaking, in the so-called “special relationship” between the U.S. and the UK. The chronicle of that relationship is replete with instances of the tail wagging the dog at critical moments. The point is, interestingly enough, on the attack on Sevastopol, Moscow is pointing the finger more at the MI6 operatives than at Kiev. (here and here)

The U.S.-UK calculus was originally to get the Russians bogged down in a quagmire in Ukraine and to incite an insurrection within Russia opposing ‘Putin’s war.’ But it failed. The U.S. sees that over 300,000 trained ex-military personnel from Russia are being deployed to Ukraine for launching a major offensive to end the war in the coming 3-4 months.

That is to say, the roof is coming down on the entire edifice of lies and deceptive propaganda that formed the western narrative on Ukraine.The defeat in Ukraine could have disastrous consequences for the U.S.’ image and credibility as a superpower not only in Europe but on the global stage, undermine its leadership of the transatlantic alliance and even disable NATO.

Curiously, however, it cannot be lost on Washington that even at this juncture, Moscow is nudging Kiev to resume the negotiation process. In fact, in a significant development on Tuesday, Ukraine gave written guarantees to the joint coordination centre in Istanbul (comprising Turkey, Russia and the UN) that the humanitarian corridor and Ukrainian ports designated for the export of agricultural products for military operations will not be used henceforth against the Russian Federation. Kiev assured that “the maritime humanitarian corridor will be used only in accordance with the provisions of the Black Sea Initiative and the related JCC regulation.”

In retrospect, the Biden Administration made a terrible mistake in its estimation that the war would lead to a regime change in Russia following a collapse of the Russian economy under the weight of western sanctions. On the contrary, even the IMF admits that the Russian economy has stabilised.

The Russian economy is expected to register growth by next year. The comparison with the western economies that are sinking into high inflation and recession is far too glaring to be missed by the world audience.

Suffice to say, the U.S. and its allies have run out of sanctions to hit Russia. The Russian leadership, on the other hand, is consolidating by pushing ahead with the shift to a multipolar world order challenging the U.S.’ century-old global dominance.

Fundamentally, it is the capitalist system itself which is responsible for this crisis. We are currently suffering under the effect of the longest and deepest crisis the system has known since the redivision of the world that took place in World War II. The imperialist powers are once again preparing for war to redivide the world in the hopes of getting out of their crisis, much as they prepared prior to World War II.

The big question is what Russia’s response is going to be. It is all but certain that Moscow hasn’t been caught by surprise at the revelation in Washington regarding the presence of U.S. troops in Ukraine. It is highly unlikely that Russia will resort to knee-jerk reaction.

The so-called ‘counter-offensive’ by Ukraine has fizzled out. It made no territorial gains or any significant breakthrough. But the Ukrainian military suffered heavy casualties in the thousands and huge losses in military equipment. Russia has gained the upper hand and it is conscious of that. All along the frontline, it is becoming evident that the Russian forces are steadily seizing the initiative.

Neither the U.S. nor its NATO allies are in a position to fight a continental war. Therefore, it will be entirely up to the American troops moving around in the steppes of Ukraine auditing the U.S.-made weaponry to stay out of trouble and keep their body and soul together.Who knows, the Pentagon may even decide to work out a ‘deconfliction’ mechanism with Moscow, as in Syria!

That said, seriously, from the Russian perspective, the auditing of U.S. weaponry on Ukrainian soil per se may not be a bad thing. There is real danger that the weapons supplied by the U.S. may reach Europe and turn that beautiful manicured garden into a jungle (like Ukraine or America)—to borrow the stunning metaphor used by Josep Borrell, EU’s foreign policy chief, recently.