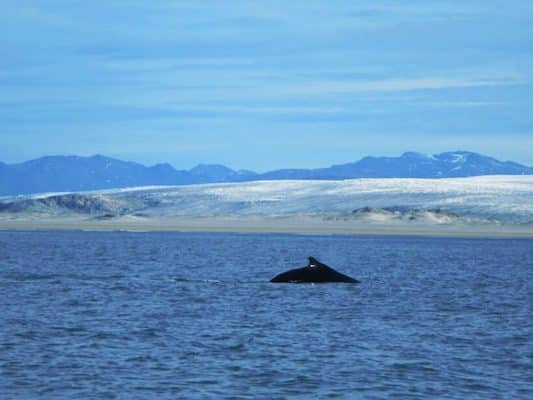 A humpback whale swims along the Greenlandic ice sheet in the Davis Strait south of Nuuk. Around 85% of the surface area of Greenland is covered by ice. (Source: Wikimedia Commons)

The implications are extremely concerning and far-reaching, especially for sea level rise. It is a significant development that will prompt climate scientists to recalculate global warming’s impact. In that regard, some facts are worth repeating. Here’s one that cannot be told often enough because of the gravity of its implications for the 130 coastal cities of the world each with over one million residents:

It should be noted that it takes billions upon billions of tons of melted ice to move sea levels appreciably up, which does give some pause to any immediacy of cities overrun by gushing water. Yet, what if 475 billion tons per year becomes much more than that?

Additionally, rehashing one more relevant stat, according to John Englander, the sea level expert par excellence: “If we only melt 5% of global glacial ice, it’s 10 feet of sea level rise.” But, how long does it take to melt 5%? Nobody knows for sure, but it’s most likely well beyond 2100. What about only 2%? Again, nobody knows.

By now readers of articles like ‘Greenland is Worse Than Ever, Much Worse’ must be getting accustomed to negative reports of climate change getting worse over time. In fact, relentlessly year by year it gets worse, never better. It’s like a terminally ill cancer patient knowing what to expect: Every checkup gets worse. Greenland just got an eye-opener!

There’s a good reason why climate change continually gets worse. It’s the failure of the leaders of the world to react to years and years and years of climate scientists’ warnings, starting in the 1980s with Dr. James Hansen formerly Director of the NASA Goddard Institute for Space Studies: “Global Warming Has Begun, Expert Tells Senate” splashed onto the front page of The New York Times d/d June 24, 1988.

The needle to fix the climate change imbroglio has not budged since well before Dr. Hansen’s speech to the U.S. Senate. Fossil fuels still account for 80-90% of energy use, the same as 50 years ago!

Moreover, according to the International Energy Agency (IEA) fossil fuel companies plan on $1.5T spending for new production. That’s a lot of future CO2. And, in certain quarters, coal is picking up steam again.

These are the direct sources of CO2 spewing into the atmosphere, prompting a big question for the 21st century: What’s gonna stop the onset of runaway global warming?

As it happens, new studies bring new insight to prior studies. For example, previous studies of the Greenland ice sheet studied the edges of Greenland to look at active melting. Whereas, this new Khan study is drawn further inland, more than 100 miles inland, discovering thinning ice never before seen.

What they found was alarming: thinning from Greenland&#39;s coast stretched back 200 to 300 kilometers (125 to 185 miles)… what we see happening at the front reaches far back into the heart of the ice sheet, said Shfaqat Abbas Khan in a press release about the study, published in Nature…. the new model really captures what&#39;s going on inland, the old ones do not… you end up with a completely different mass change, or sea level projection. (Source: Shfagat A. Khan, et al, Extensive Inland Thinning and Speed-up of Northeast Greenland Ice Stream, Nature, Nov. 9, 2022)

The principal area studied, known as the Northeast Greenland Ice Stream (NEGIS) covers approximately 12% of the ice sheet. The thinning is estimated to add 13.5 to 15.5 mm to sea levels over time, which is equivalent to the contribution of the past 50 years. More to the point, according to the scientists: &quot; The NEGIS could lose six times more ice than existing climate models estimate.” Thus, it’s getting worse, much worse, six times worse than previous studies. 6xs is really a lot, off the charts.

Warm ocean currents that absorb over 90% of the planet’s heat cause the inland disturbances. In 2012 the floating extension of NEGIS collapsed, an event that accelerated ice flow and triggered rapid ice thinning, spreading upstream by over 100 miles: One has to wonder if the integrity of the entire ice sheet is more compromised than ever before?

An article in Space.com commented on the new finding:

Greenland&#39;s largest ice sheet is thawing at a much higher rate than expected, a new study has revealed, suggesting it will add six times more water to the rising sea levels than previously thought. And the trend may not be limited to Greenland, scientists worry. (Source: Sea Levels Might Rise Much Faster Than Thought, Data From Greenland Suggest, Space.com, November 9, 2022)

Repeating that prior statement “And the trend may not be limited to Greenland, scientists worry.” Probably points a finger at Antarctica, where recent research has identified similar warm underwater currents eroding the base of ice sheets, for example, Thwaites glacier West Antarctica, the widest glacier on the planet: Under the ice, the geological structure of Thwaites is “a recipe for disaster.” Until only recently, Thwaites had not measurably changed since it was first mapped in the 1940s. All of that has changed now that global warming has intervened. It’s what’s happening hidden underneath that spooks scientists:

Ocean water well above melting point is eroding the base of the ice. (Source: Ted Scambos, lead principal investigator for the Science Coordination Office of the International Thwaites Glacier Collaboration (SCO project).

Even more alarming: The Khan study discovered that accelerating melt continued throughout the winter of 2021 and the summer of 2022, which were unusually cold in Greenland, suggesting the thinning/melting process is impervious to temperature changes on the surface.

According to Eric Rignot, professor of Earth System Science at the University of California, Irvine, co-author of the paper: “We foresee profound changes in global sea levels, more than currently projected by existing models.” Comments from leading climate scientists like Rignot saying the study represents “profound changes in sea levels” should alert world leaders to take action to convert fossil fuels to renewables, posthaste.

The Khan study was released as the world met in Egypt for COP27, seeking solutions. Based upon multitudes upon multitudes of climate change issues throughout the world maybe the delegates should extend their stay by several months or maybe even by one year just to go thru reams of demanding issues. Two weeks of COP27 can only scratch the surface of so many pressing issues that threaten our continuance.

Hopefully, COP27 does initiate real breakthrough enforcement mechanisms that compel countries to meet net zero by 2030, if that is soon enough, but if history is a prologue to results, don’t hold your breath. Instead, it’s prudent, in fact real smart, to make plans to adapt to fierce and fiercer climate change as well as much higher sea levels sooner rather than later.

The Khan study unfortunately comes on top of a chilling statement by the world’s leading Greenland expert as mentioned on a Radio Ecoshock interview d/d October 26, 2022: Luke Kemp: Climate
Endgame:

Greenland ice expert Jason Box warns Earth is already committed to at least another foot of sea level rise from Greenland no matter what we do.