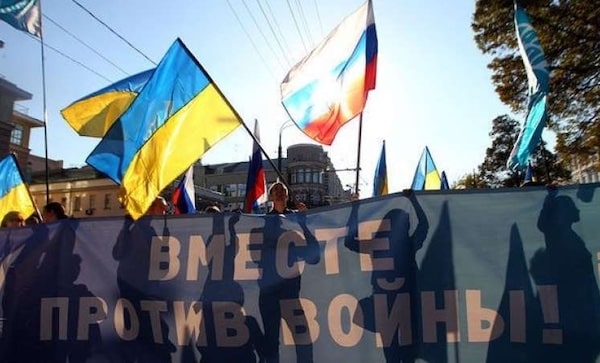 Peace March. The Banner Reads ‘Together against the War’—the Message of the Combined Russian and Ukrainian Flags, Moscow, September 21, 2014. (Photo: E. Razumnyi/Vedomosti)

In a new 25-minute live broadcast devoted to the war, Iran’s Press TV showcases key issues from this week’s developments on the front lines, including the latest bombardments of the Zaporozhie nuclear power station and the missiles which fell on Polish territory, threatening to bring in NATO as full co-belligerents. The panelists were asked to comment on likely ‘end game’ scenarios for this war.

As we know, mainstream Western media is rock-solid in its predictions of ultimate Ukrainian victory, with the Russian evacuations of Kharkov and Kherson as their leading arguments.  In the alternative media, opinion is divided over whether there will indeed be a new Russian offensive in coming weeks when the 220,000 recently mobilized reservists still in training are ready for action or whether the U.S. administration will push Zelensky into negotiations with the Russians that temporarily or even permanently put an end to the fighting.

A lot of attention is directed in world media to the resistance of Zelensky to entering into negotiations. That is explored as well on this Iran TV program. However, an issue which is not addressed there is the willingness and even the ability of the Russian President to enter into negotiations.

Ever since the October mobilization of reservists, the military operation in Ukraine has de facto become the war of a nation in arms about which everyone in Russia now has an opinion. The fact is that Russian society from top to bottom is very unhappy with the present state of the war—but their discontent is with what they see as the pusillanimity of their own government in not responding more resolutely to Ukrainian provocations in the form of continuing artillery strikes on the Kursk and Belgorod regions from the Kharkov oblast just across the border or through atrocities such as the just released video of the cold-blooded murder of Russian prisoners of war by gleeful Ukrainian soldiers. The withdrawal from the city of Kherson inflamed the passions of the Russian public who demand better explanations in their parliament and on their television than they have received so far.

The pressure on Mr. Putin is from his own patriotic supporters, and an untimely truce for negotiations right now could lead to civil disorder in Russia. This is not idle speculation: it was perfectly clear from the latest edition of yesterday’s talk show Sunday Evening with Vladimir Solovyov in which a deputy speaker of the Duma from the ruling party United Russia and a Duma committee chairman from the Communists took an active part, meaning that the nation’s elites are moving with the popular current against Defense Minister Shoigu if not against those still higher in the Kremlin. Meanwhile, discredited Russian Liberalism is taking down with it the commitment to free markets for the sake of more effective war production. There is serious talk of reintroducing Five Year Plans. And the recent official approval of plans to proceed with traditional celebrations of Christmas and New Year’s in Russian cities was denounced as inappropriate for a country at war in an existential struggle with NATO.

We may conclude that the Special Military Operation is indeed a watershed in Russian domestic politics.