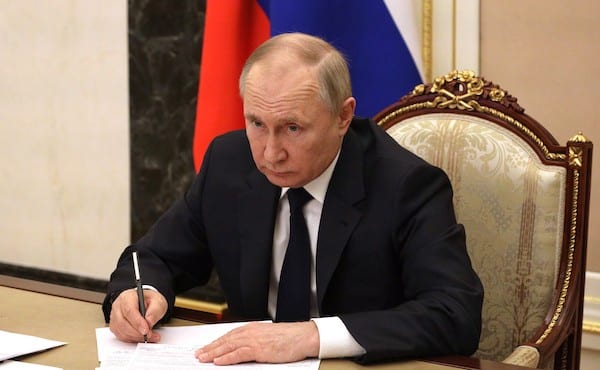 The televised speech yesterday morning by Vladimir Putin and the follow-up remarks by his Minister of Defense Shoigu announcing the partial mobilization of Russia’s army reserves to add a total of 300,000 men to the military campaign in Ukraine have been widely reported in the Western press. Plans to hold referendums on accession to the Russian Federation in the Donbas republics this weekend and also in the Kherson and Zaporozhie oblasts in the very near future also were reported by the Western press. However, as is very commonly the case, the interrelationship of these two developments has not been seen, or, if seen, has not been shared with the general public. Since precisely this interrelationship has been highlighted on Russian state television talk shows these past two days, I use this opportunity to bring to my readership the key facts on what turn the ongoing conflict in Ukraine will now take and an updated view of when it will end and with what results.

The very idea of referendums in the Donbas has been ridiculed by mainstream media in the United States and Europe. They are denounced as ‘sham’ and we are told that the results will not be recognized. In fact, the Kremlin does not at all care whether the results are recognized as valid in the West. Their logic lies elsewhere. As for the Russian public, the only critical remark about the referendums has been about the timing, with even some patriotic folks saying openly that it is too early to hold the vote given that the Donetsk People’s Republic, the Zaporozhie and Kherson oblasts have not yet been fully ‘liberated.’ Here too, the logic of these votes lies elsewhere.

It is a foregone conclusion that the Donbas republics and other territories of Ukraine now under Russian occupation will vote to join the Russian Federation. In the case of Donetsk and Lugansk, it was only under pressure from Moscow that their 2014 referendums were about declaring sovereignty and not about becoming part of Russia. Such annexation or merger was not welcomed by the Kremlin back then because Russia was not ready to face the expected massive economic, political and military attack from the West which would have followed. Today, Moscow is more than ready: indeed it has survived very well all the economic sanctions imposed by the West from even before 24 February as well as the ever growing supply to Ukraine of military materiel and ‘advisers’ from the NATO countries.

The vote over joining Russia will likely hit 90% or more in favor. What will immediately follow on the Russian side is also perfectly clear: within hours of the declaration of referendum results, the Russian State Duma will pass a bill on ‘reunification’ of these territories with Russia and within a day or so, it will be approved by the upper chamber of parliament and immediately thereafter the bill will be signed into law by President Putin.

Looking past his service as a KGB intelligence operative, which is all that Western “Russia specialists” go on about endlessly in their articles and books, let us also remember Vladimir Putin’s law degree. As President, he has systematically stayed within domestic and international law. He will do so now. Unlike his predecessor, Boris Yeltsin, Vladimir Putin has not ruled by presidential decree; he has ruled by laws promulgated by a bicameral parliament constituted from several parties. He has ruled in keeping with international law promulgated by the United Nations. UN law speaks for the sanctity of territorial integrity of Member States; but UN law also speaks of the sanctity of self-determination of peoples.

What follows from the formal merger of these territories with Russia? That is also perfectly clear. As integral parts of Russia, any attack on them, and there certainly will be such attacks coming from the Ukrainian armed forces, is a casus belli. But even before that, the referendums have been preceded by the announcement of mobilization, which points directly to what Russia will do further if developments on the field of battle so requires. Progressive phases of mobilization will be justified to the Russian public as necessary to defend the borders of the Russian Federation from attack by NATO.

The merger of the Russia-occupied Ukrainian territories with the Russian Federation will mark the end of the ‘special military operation.’ An SMO is not something you conduct on your own territory, as panelists on the Evening with Vladimir Solovyov talk show remarked a couple of days ago. It marks the beginning of open war on Ukraine with the objective of the enemy’s unconditional capitulation. This will likely entail the removal of the civil and military leadership and, very likely, the dismemberment of Ukraine. After all, the Kremlin warned more than a year ago that the U.S.-dictated course of NATO membership for Ukraine will result in its loss of statehood. However, these particular objectives were not declared up to now; the SMO was about defending the Donbas against genocide and about de-nazification of Ukraine, itself a rather vague concept.

Adding another 300,000 men at arms to the force deployed by Russia in Ukraine represents a near doubling and surely will address the shortages of infantry numbers that has limited Russia’s ability to ‘conquer’ Ukraine. It was precisely lack of boots on the ground that explains Russia’s painful and embarrassing withdrawal from the Kharkov region in the past two weeks. They could not resist the massive concentration of Ukrainian forces against their own thinly guarded hold on the region. The strategic value of the Ukrainian win is questionable, but it greatly enhanced their morale, which is a major factor in the outcome of any war. The Kremlin could not ignore this.

At the press conference in Samarkand last week following the end of the annual gathering of heads of state of the Shanghai Cooperation Organization, Vladimir Putin was asked why he has shown so much restraint in the face of the Ukrainian counter offensive. He replied that the Russian attacks on Ukrainian electricity generating plants which followed the loss of the Kharkov territory were just ‘warning shots’ and there would be much more ‘impactful’ action to come. Accordingly, as Russia moves from SMO to open war, we may expect massive destruction of Ukrainian civil as well as military infrastructure to fully block all movement of Western supplied arms from points of delivery in the Lvov region and other borders to the front lines. We may eventually expect bombing and destruction of Ukraine’s centers of decision-making in Kiev.

As for further Western intervention, Western media have picked up on President Putin’s thinly veiled nuclear threat to potential co-belligerents. Russia has explicitly stated that any aggression against its own security and territorial integrity, such as has been raised by generals in retirement in the USA speaking to national television in the past several weeks about Russia’s break-up, will be met by a nuclear response. When Russia’s nuclear threat is directed at Washington, as is now the case, rather than at Kiev or Brussels, the supposition till now, it is unlikely that policy makers on Capitol Hill will long remain cavalier about Russian military capabilities and pursue further escalation.

In light of all these developments, I am compelled to revise my appreciation of what transpired at the Shanghai Cooperation Organization meeting. Western media have focused full attention on only one issue: the supposed friction between Russia and its main global friends, India and China, over its war in Ukraine. That seemed to me to be grossly exaggerated. Now it appears to be utter nonsense. It is inconceivable that Putin did not discuss with Xi and Modi what he is about to do in Ukraine. If Russia indeed now supplies to its war effort a far greater part of its military potential, then it is entirely reasonable to expect the war to end with Russian victory by 31 December of this year as the Kremlin appears to have pledged to its loyal supporters.

Looking beyond Ukraine’s possible loss of statehood, a Russian victory will mean more than an Afghanistan-like bloody nose for Washington. It will expose the low value of the U.S. military umbrella for EU member states and will necessarily lead to re-evaluation of Europe’s security architecture, which is what the Russians were demanding before their incursion into Ukraine was launched in February.