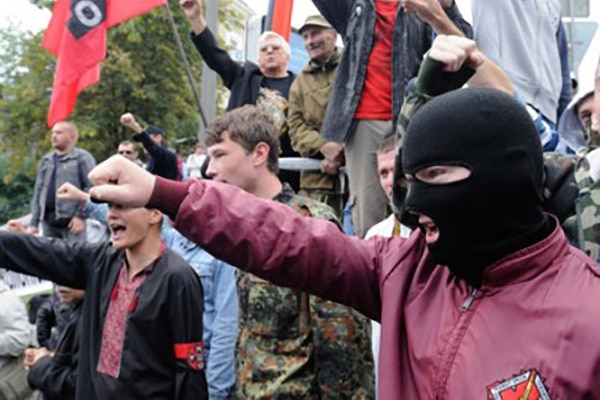 How the Western Media Deciphers the Neo-Nazi Code – Counter Information

A couple of weeks before Vladimir Putin announced his ‘special military operation’ in Ukraine, he met in the Kremlin with Germany’s chancellor Olaf Scholz. At their joint press conference following the meeting, Putin mentioned in passing that Ukraine is controlled today by neo-Nazis. This remark was famously ridiculed by Scholz as “laughable,” thereby earning for him the Kremlin’s utter contempt. German-Russian relations have undergone a sharp deterioration ever since, with Germany gradually stepping up its supplies of cutting-edge lethal weaponry to Kiev and Russia, in its internal political discussions, placing Germany alongside the United States and Britain as de facto ‘co-belligerents’ which may be subjected to Russian missile attacks if the war escalates further.

At the time of the exchange of courtesies between Putin and Scholz in February, I wrote an essay in which I tried to explain the background to Russian claims of rampant Nazism in Ukraine, which sounded very odd to Westerners but found a very receptive audience among the Russian population, where evocations of Nazism arise at every annual May 9th celebration of Victory in Europe Day, marking the end of WWII. As I noted then, one source of Russian allegations was the celebration by official Kiev of the ultra-nationalist Stepan Bandera, a Nazi collaborator of the German forces in WWII who practiced vicious ethnic cleansing against Jews, Russians and Poles. Statues are erected to him; streets are named after him across Ukraine.

Of course, the numbers of actual neo-Nazi groups in Ukraine before and since 2014 have been very small as a percentage of the overall population. In the parliamentary and presidential elections that have taken place since the United States installed its preferred regime in Kiev in February 2014, the neo-Nazi candidates have not scored more than several percentage points. However, from the first days of the February coup d’etat, neo-Nazis have held the key ministerial posts in defense and the security apparatus of the Ukrainian government, effectively calling the shots in foreign policy and the confrontation with Russia.

When the Russians finally flushed out the Azov battalion extremists from their fortified positions at the Azovstal steel works in Mariupol three months into the ‘special military operation,’ they found and presented on television proof positive of the Nazi presence at the core of the Ukrainian armed forces. Ukrainian prisoners of war were stripped and the Russian camera men video-recorded their tattooed bodies, featuring not only swastikas and other German Nazi symbols but also portraits of Hitler and other Nazi leaders from the Third Reich. Western journalists, of course, saw all of this but it hardly was reported in our media. Nor has there been any reconsideration in the West of the facile dismissal of Russian concern over neo-Nazism that Scholz demonstrated.

Events in the EU’s ‘front line’ countries of the Baltic states and Poland have given a new dimension to the Russian concerns over neo-Nazism. I have in mind the dismantling and removal of statues and other monuments to the Soviet Army liberators of Estonia, Latvia and Lithuania from German occupation in 1945 even as their own Nazi collaborators from the past are given new honors. This has greatly accelerated in recent weeks. Meanwhile, parades of the descendants of the collaborators have been going on in Riga and elsewhere year after year.

Still more controversial and significant has been the attempts of Lithuania to close down land transportation between the main territory of the RF and its Kaliningrad outpost in violation of all signed undertakings for free transit between different constituent parts of Russia agreed by the EU.

Add to that the latest Estonian led effort to close Europe entirely to Russians. A few weeks ago, Estonian border guards at the Narva crossing refused to admit Russians holding Schengen visas issued previously by their own authorities and now they are refusing to recognize Schengen visas issued by other EU Member States. Together with Poland, all three Baltic States have demanded that the EU no longer issue visas to Russian tourists.

To be sure, the demand that all Russians be barred from Europe as punishment for their war on Ukraine has not met with universal approval within the EU. Even Germany came out against the initiative, with Scholz saying that exceptions must be made for humanitarian reasons. Others have debated the legality under EU law of such generalized prohibitions directed at an entire population. But the debate rages on.

Finally, a statement made yesterday by Latvian President Egils Levits got the full attention of Moscow. He said that Russian-speaking residents of Latvia should be ‘isolated from society’ if they oppose his government’s policies with respect to the war in Ukraine. Just what is meant by “isolate” is not clear. Does Levits intend to intern them in concentration camps? Given the absolute failure of Latvia to respect EU human rights norms going back from the first days of the country’s independence from the USSR in 1991, such an atrocity would not be out of character.

I have dealt with precisely this issue in essays going back to 2014 which were included in my collection Does Russia Have a Future?: see chapter 22 “Latvia’s 300,000 Non-Citizens and the Ukrainian Crisis Today” and chapter 33 “Latvia’s failed U.S. inspired policies towards Russia and Russians.” I further explored these issues in my 2019 book A Belgian Perspective on International Relations, chapter 38 “Republic of Latvia, Apartheid State Within the EU.”

The point is that upon achieving independence thanks to the active support of many of its Russian-speaking citizenry, the government of Latvia turned around and stripped 400,000 of them of their citizenship, close to 40% of the total population at the time, and offered them a path to regain passports that only a tiny fraction of them could follow. When President Levits speaks today of Russian-speaking “residents” of Latvia, he has in mind those who were deprived of civil rights including passports and remain stateless up to the present time. Everything that Latvia did to its Russian-speaking population going back 30 years set the precedents for Kiev’s repressive policies towards its own 40% who are Russian speakers after the nationalists from Lvov came to power in 2014.

These various developments were the main topic for discussion in yesterday’s Evening with Vladimir Solovyov political talk show, which stood out as especially valuable. Although I have made reference to this particular talk show frequently over the years as a good source of information about what Russia’s political and social elites are thinking, I freely acknowledge that the presenter cannot and does not fill every program with material and panelists worth listening to. Indeed, there is a lot of sludge on air between the gems. By ‘sludge’ I mean the kind of ‘kitchen talk’ in which expert panelists talk the same non-facts-based drivel that ordinary Russians will engage in when they follow the principle of socializing described by Chekhov in Act Two of The Three Sisters:

They are not serving us tea, so let’s philosophize.

In any case, last night’s Solovyov was definitely worth listening to. The question of neo-Nazism in Europe was the glue binding together different elements of the discussion, ranging from Levits’ obnoxious declaration of the same day to the fate of ordinary Russians in Kazakhstan and Central Asia after the collapse of the Soviet Union, and what to do about all of these challenges to the Russian World.

The overriding point was that the Russophobia and ‘cancel Russian culture’ movements that have swept Europe during 2022 mean that Russians are the Jews of today. They are what the Hitlerites called Untermenschen, against whom all manner of rights violations if not outright murder can be practiced. This arises in its worst form in Ukraine, where Russians as a people are systematically dehumanized in statements from the top leadership of the country. In Ukraine, the ultra-nationalists call Russians “Colorado,” a reference to the bugs that infest potato crops. These insects carry the red and yellow colors of the St George’s ribbons that patriotic Russians wear. This is the same logic that made possible the biological weapons attack on Russian soldiers in the Zaporozhie that was carried out last week by Ukrainian forces, sending the victims to intensive care treatment for botulism poisoning. That development probably did not get coverage in your daily newspaper.

The conversation on Solovyov was particularly interesting in the ‘what is to be done’ segment. Acknowledging that a ‘special military operation’ against Latvia is not practicable yet given Latvia’s membership in NATO, a panelist who heads the State Duma committee on relations with the Former Soviet Union states, said that those Russians who profited from the transit business between Russia and Latvia for decades should now pay up and contribute financially to relocating the Russian speakers in Riga to the Russian Federation, meaning providing good housing and jobs that till now were never on offer to incentivize immigration. A fellow panelist broadened the proposed assistance to suggest a government program of resettlement modeled on what Israel did some decades ago to facilitate the relocation of certain Black African Jews from their country of persecution to the State of Israel. And it was suggested that similar relocation offers should be extended to Russian speakers in Kazakhstan and other Central Asian countries where they have all been second class citizens since these countries became independent of the USSR.

This issue of the fate of ethnic Russians living outside the borders of the Russian Federation at the time of the break-up of the Soviet Union has been around for a long time.  When Vladimir Putin spoke the words that have been so often raised by Russia-haters in the West, namely that the break-up of the USSR was the greatest geopolitical catastrophe of the 20th century, he definitely had in mind the fate of the 25 million Russian speakers who were left high and dry in the other republics, now sovereign states ruled by the non-Russian majority populations. In 1991 and later years, Russia’s own economic woes left it unable to offer decent housing to its soldiers and officers transferred back to Russia from the former Warsaw Pact countries, let alone to care for the 25 million Russian civilians outside its borders.

Last night’s panelists argued that the time has come to redress this moral failure of Russia to stand by its former citizens who are Russian-speakers, to offer to repatriate them under attractive conditions. This would respond to the country’s own economic interests by redressing the demographic challenges Russia is facing as a result of its 1990s collapse and birth rates that then declined precipitously. And it would be a direct answer to the neo-Nazi movements in Europe which would gladly exacerbate repression among Russians in their midst.