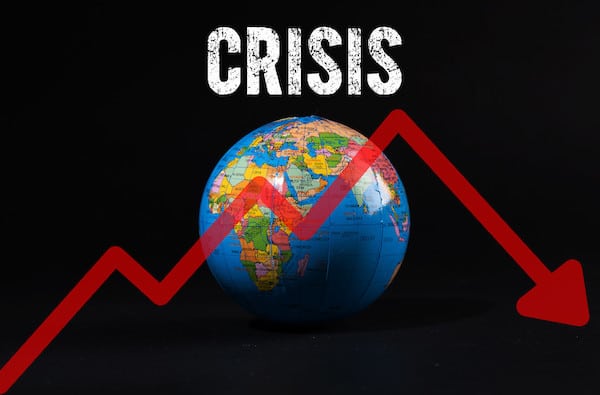 It is in vogue nowadays to describe the multifaceted and intertwined crises of capitalism without referring to capitalism itself. Obscure jargon of ‘overlapping emergencies’ and ‘polycrisis’ are brought up to describe the complexity of the situation, and they serve, with or without intention, to conceal the culprit, namely the totality of capitalist relations. This short piece discusses the content, function, and limits of these evasive practices with concrete examples.

A Hodgepodge of Risks

“A polycrisis is not just a situation where you face multiple crises” writes Adam Tooze, it is rather a situation “where the whole is even more dangerous than the sum of the parts” (Tooze 2022a). Even at first sight, he is able to count seven radical challenges on the radar, including Covid, inflation, recession, hunger crisis, climate crisis, nuclear escalation, and a ‘Trumpite’ Republican Party storming back to power.

Former long-time Harvard President, Larry Summers celebrates the term polycrisis for its capacity to capture the many aspects at stake, and adds: “I can remember previous moments of equal or even greater gravity for the world economy, but I cannot remember moments when there were as many separate aspects and as many cross-currents as there are right now” (Summers 2022). Make no mistake, the approval comes from a life-time mouthpiece of the establishment, foe of the working classes and the oppressed, frank enough to argue as the then Chief Economist of the World Bank that “the economic logic behind dumping a load of toxic waste in the lowest wage country is impeccable”.

In Tooze’s view, in the 1970s, too much or too little growth, or late capitalism could be shown as the ultimate source of the problems at hand depending on one’s political position. What makes the current moment distinctive is the fact that “it no longer seems plausible to point to a single cause” (Tooze 2022b). He is thus quite explicit that one should avoid the use of grand narratives, or, in line with that, the designation of the capitalist mode of production as the root cause of the radical challenges upon us.

A similar concept is that of ‘overlapping emergencies’, which has been in use by mainstream outlets such as CNN or the United Nations, and has been adopted by critical thinkers. Isabella Weber, for instance, who has employed the term in popular and academic writings with various co-authors, argues that “we are living in a time of overlapping emergencies: the pandemic is not over, climate change is a reality, and geopolitical stability has reached a nadir” (Weber 2022).

Weber is one of the architects of the cap on the gas price in the German case, and an advocate of additional tools and institutions such as expanded state capacity to react to supply bottlenecks, monitoring of essential sectors and targeted intervention in case of need, and so forth.  Rather than regarding this as a one-shot, ad hoc policy response, Weber argues, “we need to generalise this approach and be prepared for targeted emergency stabilisation. We need economic disaster preparedness to guarantee that we are able to react to shocks in sectors that are important for the work of [the] whole economy. These are stabilization measures needed in our age of overlapping emergencies”. (Weber, in Gerbaudo 2022)

Although Weber’s broader scholarly work emphasizes the limitations of the market mechanism from a more systematic perspective, a common aspect of both ‘overlapping emergencies’ and ‘polycrisis’ as a framework is what seems a notable reluctance to explicitly acknowledge capitalism as an underlying force conditioning all facets of the ‘overlapping emergencies’ or ‘polycrisis’ at stake. The analysis and implications thereof are confined to the level of appearances, and, therefore, become incapable of grasping the web of contradictions that give rise to them. These contradictions, or the source of the emergencies seem to be outsourced to a shock (Russia-Ukraine war, climate destabilization, present and expected future pandemics) or state of affairs external to the political terrain on which they are recognized and discussed. Within this depoliticizing and neutralizing narrative, capitalism at best looms as an imperceptible, shadowy figure in the background, not worth problematizing, especially as the bells are constantly tolling, heralding crisis after crisis.

The reluctance to openly challenge capitalism, be it intentional or not, is also seen in the comeback of industrial policy, with much more attention now given to its proponents such as Ha-Joon Chang (2002) and Mariana Mazzucato (2018; 2021), to mention the most prominent ones. Industrial policy is portrayed as a way out of the looming long-term stagnation towards green transition. Prescriptions to industrialize are issued to peripheral economy so that they can ‘develop’, while disregarding structural relations of dependency, the global division of labor (Pradella 2014). As such, the role of exploitation as the ultimate foundation of capital accumulation—and the necessary unevenness of capital accumulation—is papered over. Similarly, the narrative of a mission-oriented reframing of economic growth creates the illusion that a nation or region can be unified under the government’s leadership as to promote inclusive capitalism, coordinating the interests of various sets of owners of resources.

Within this framework, ‘crisis’ is also employed as a tool to frame the narrative around symptoms of our global economic system. For example, Mazzucato “the world’s scariest economist” according to the Times (Rumbelow 2017), argues that “capitalism is at least facing three major crises”, namely a pandemic-induced health crisis, financial instability, and the climate crisis (Mazzucato 2020a). These are not considered to be crises of capitalism as such, but of how we do capitalism (Mazzucato 2020b).

It follows that “there’s all sorts of different ways to do capitalism. There’s the kind of maximization of shareholder value. There’s the more stakeholder value perspective […] that fundamentally affects how public and private come together” (Mazzucato, in Nelson 2019). It is the latter partnership model which allows for the government to determine the rate and direction of innovation-led growth, which prioritizes public interest over private gain. Problematizing capitalism as such and raising the alternative of socialism, Mazzucato argues, is a distraction, and “it’s not going to make [companies] do anything different from what they’re doing now” (ibid.).

However, this view overlooks the fact capitalism is about profit and accumulation, and not about use value, or wealth, in the first place. Accumulation can be temporarily restrained, redirected, curbed, yet the fundamentals of capitalism cannot be overturned by means of any mission-oriented partnerships.

An important lesson that tends to be forgotten is that the cuts in social services, decoupling of real wages from productivity, aggressive expansion of commodity frontiers and similar interventions as to extend terrains of accumulation in the last few decades are precisely the collected outcomes of capital’s backlash to the profitability crisis in the imperialist center in the 1970s, a crisis which followed from the attempts to tame capital and establish a class compromise within the larger context of growing ‘threat’ of socialism. It is therefore difficult to understand how critical scholars today can commit to the possibility of another ‘Golden Age’ capitalism, while the driving force and regulating principles of the capitalist system itself are left unchallenged in any substantial way.

The conceptual frameworks for viewing ‘crises’ discussed above have the common feature of ‘reshaping’ capitalism or ‘stabilizing’ the global economy in the face of multiplying crises dynamics. Rather than interrogating the structural forces that shape systemic outcomes, these frameworks suggest that the pressing manifestations of the ecological breakdown, geopolitical tensions and wars, supply bottlenecks, inflation, or other discussed phenomena result from policy mistakes, greedy powerful corporations, bad intentions, or a lack of historical knowledge, and not from the accumulation imperative constitutive of capitalism.

Problems such as ecological breakdown, militarization, inadequate and unjust responses to an ongoing pandemic, the rise of openly racist and anti-immigrant politics, which appear to be independent, are integral parts of the capitalist totality with its peculiar property, production and exchange relations, structural imperatives and limitations, the resulting exploitative and oppressive dynamics along with their conflictual subjectivities.

Take ecological breakdown, for instance, which seems to be the alarming phenomenon for many commentators. Without grasping capital as a set of social relations between the owners of means of production and workers laboring for wage, and without conceiving of this relation as the expansion of value as its single overriding goal, neither the exploitative character of capitalist growth nor the imperative of cost efficiency can be comprehended as structural phenomena. The systematic shifting of costs to third parties (Kapp 1971), ruthless plundering of non-human natures in the context of the continuous adjustment of commodity frontiers as to appropriate cheap nature (Moore 2015), and the failure to make any significant progress to slowdown ecological breakdown even in the face of its increasing recognition by the public would then appear as accidental or a result of policy mistakes.

What is at stake here is not reducing all argumentation and analysis to an abstract notion of capitalism as to render any concrete discussion redundant. Quite the contrary, concrete appearances can only be made sense of by carefully studying their inner connections—not only with one another, but also with the totality of capitalist relations, which is undeniably larger than the sum of its parts.

Indeed, we are confronted with challenges at an unprecedented scale and complexity. Indeed, they call for radical responses and ruptures. To do so, however, we should be able to call the culprit by its name in the first place. And perhaps pick our side more carefully in the light of histories of the intertwined crises at stake. Are we going to partner up with governments and institutions complicit in decades of ecocide, imperialist aggression and warmongering, impoverishment of working classes at home and abroad, and oppression of ‘the wretched of the earth’, or organize among and with the working classes and the oppressed to fight for a future free of capital’s dominion?

Güney Işıkara is a a Clinical Assistant Professor in Liberal Studies at New York University.

Mazzucato, Mariana. 2020b. “The Covid-19 Crisis Is a Chance to Do Capitalism Differently.” www.theguardian.com

Mazzucato, Mariana. 2018. The Value of Everything: Making and Taking in the Global Economy. London: Penguin.

Moore, Jason W. 2015. Capitalism in the Web of Life: Ecology and the Accumulation of Capital. London: Verson

Nelson, Eshe. 2019. “One of the World’s Most Influential Economists is on a Mission to Save Capitalism from Itself.” qz.com/1669346

Pradella, Lucia. 2014. “New Developmentalism and the Origins of Methodological Nationalism.” In Competition and Change 18 (2): 180-193. journals.sagepub.com