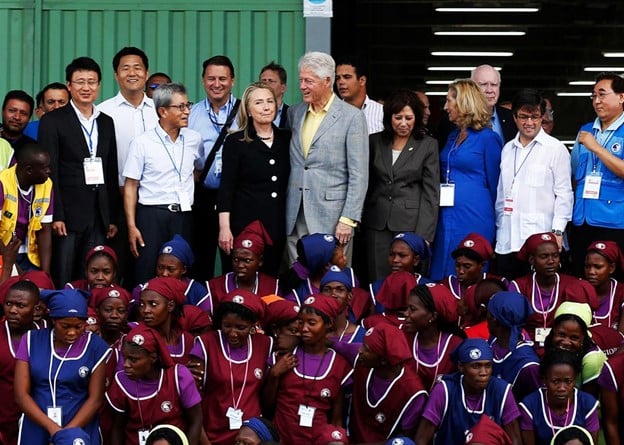 Often, when you mention Haiti in conversation and the anti-imperial struggle that has consistently been waged by the Haitian people against imperialist forces for centuries, you are met with minor acknowledgement and some confusion by the listener. Even in cases where there are those who understand Haiti’s battle against imperialist interventions and incursions—many people are still unclear about: “why Haiti.” This is especially true in the present, where there exists a propagandized belief that there are no broader imperialist aspirations in the Caribbean, insofar as those interests cannot be tied to interests in Latin America, and especially to Cuba.  Persistent myths about Haiti and confusion about the nature of politics in the Caribbean have allowed systematic investigations into (neo) imperial enterprises in the broader region to go largely uninvestigated. This is all at the peril of failing to contextualize sustained foreign meddling in the Caribbean region and the consistent need by those forces for sustained violence to maintain their dominant position.

On November 10th, 2022 I was invited by the Black Alliance for Peace (BAP) Haiti/Americas Team to participate as a panelist on a teach-in webinar discussing the urgent crisis of imperialism in Haiti. Although my invitation on the panel was to focus on the role of states like Jamaica in helping to facilitate imperialism and persistent intervention in Haiti, I spent a major part of my own analysis discussing “Why Haiti.’” This is because unlike most states in the Caribbean region—Haiti stands out as one that not only had a revolution, but one in which the rights and freedoms for all Black people were guaranteed. This is quite different from other states like Jamaica, for instance, whose radical and revolutionary fervor were cut short or co-opted by liberal reformists. Co-opted revolutionary defeat in the states which this occurred, has made those states’ exploitation amenable to strong political rhetoric and sustained conservative governance, especially as it relates to security. With a revolutionary history less forgiving towards co-option, Haiti poses a constant threat to European and Anglosphere economic and ideological investments and interests in the region. The analysis below comes from an extended version of my discussion on that day.

Today, there is an ongoing narrative—largely popularized by Europe and the Anglosphere (referred to collectively as “the West” from here on)—that Haiti is poor and that nothing good is in or comes out of Haiti. This lie is so persistent, that many people do not know that Haiti is the manufacturing hub in the Caribbean—and that Haiti continues to compete against countries in Asia for foreign corporations to set up shop to exploit cheap labor. While the manufacturing and assembly line exploitation in Asia are made much more readily available by Western media sources, less widely recognized is how these same exploitations also happen systematically in Haiti, perpetuated by foreign corporations and co-signed by local elites and political puppeteers to those interests. Component parts are shipped from the U.S. and Canada for assembly in Haiti, as finished products are reimported back to these developed countries, essentially duty-free, with a small charge or tax on the cheap labor used in Haiti.

This is expressly stated in U.S. tariff code 807, whereby in the 1980s, “the major part of the total duty-free content of item 807.00 imports from the principal Caribbean countries [included] almost 80 percent for the Dominican Republic, 60 percent for Haiti, and more than 90 percent for Costa Rica and Jamaica” (U.S. International Trade Commission, 1970). This same sort of exploitative trade policy that screws over workers also expresses itself in deals like NAFTA, wherein U.S. HTS 9802.00.80 allows for “a reduction in duties for articles assembled abroad in whole or in part of U.S. components” (U.S. Customs and Border Protection, 2014). Thus, when examining Haiti, what you essentially have is a nearby site in the Americas with cheap and exploited labor, that must remain so for external interests. Or, as Democratic representative William J. Green III stated in 1970, “item 807 merely promotes a competition between Hong Kong and Haiti for lower wage labor to serve this market—without building markets worldwide” (House of Representatives).

The distance to Haiti for states like Canada and the U.S. makes the costs of doing certain kinds of business cheaper there than in Asia. So, when popular talking points such as “Haiti is the poorest country in the Americas” are repeated—it is imperative to understand that what is really going on is that Haiti is made to have the lowest wages in the Americas, because Haiti is—and there is interests in keeping Haiti–the most exploited manufacturing hub in the Americas. It is not accidental that prior to the onset of the Global COVID-19 pandemic, Haiti was being touted as the future “manufacturing Taiwan of the Caribbean” due to the impacts of the 2010 Earthquake and the worsening of the cholera epidemic in the country due to UN intervention. Part of that potential—it is admitted—lay in the fact that Haiti is seen as “a low-wage economy lying just south of the huge U.S. market and just north of the emerging economies of Latin America” (Edwards, 2015). Not ironically pushing this narrative are the same corporate entities which have made Taiwan, in the present, a supplier of military and security gear to Haiti to suppress protests (Blanchard, 2022).

In order to maintain this situation and to strengthen aspirations for a continuous site of cheap exploitation, Haiti is the most intervened-in country in the hemisphere. Worst yet, when we consider interventions into Haiti by Canada, for example, we see how it has been enabled by Haiti’s own neighbors like Jamaica. In the 1990s when Aristide was first ousted from Haiti by a CIA-backed coup d’etat, weapons sent into Haiti from apartheid South Africa landed in Kingston first. After the second coup d’etat against Aristide in 2004, weapons sent to Haiti from South Africa yet again landed in Jamaica before being sent to Haiti—highlighting the crucial role of Jamaica as an arms shipment site into Haiti (BBC Caribbean, 2004).This reality is due to conservative governance in Jamaica which allies with Western imperialisms in its history of revolutionary suppression and liberal co-option. After all, it was Jamaican politicians who agreed to aid the U.S. in its invasion of Grenada in 1983—so it is not surprising that it was also Jamaica who, in the 1990s, pushed the call for multinational forces in Haiti after the coup. Today it is in Jamaica where Canada has its “Latin America and the Caribbean” military base, which specifies Haiti as a site for military intervention while using seaports and airports in Jamaica’s capital as its staging post.

While it is easy to dismiss Jamaica as a counterrevolutionary force in the region, understanding why Jamaica’s role is this way matters. The Jamaican Defense Forces were created in the interest of Western Capitalist Imperialisms in the Caribbean region, helping to stop Black rebellions and alleged burgeoning communisms. Shortly after independence, Jamaica allowed states like Canada to conduct espionage operations from Kingston against Cuba, Venezuela, Haiti, and other countries in which the West had a fear of growing communism or socialism (Maloney, 1988). Jamaica’s proximity to states like Haiti and Cuba has made it a strong historical, and present, ally of Western security objectives in the region, whereby Jamaica gets the most amount of military and security funding from external donors in the Caribbean. This is also why Jamaica’s security doctrine and mandates, including its stance on Haiti, are beholden to Western interests. While there is some nuance in this very brief and quick history, it helps to contextualize the present-day actions of Jamaica—as well as CARICOM (The Caribbean Community Market) as a whole. CARICOM’s stance on security actions cannot be discussed outside of the fact that 52% of its security funding, thus its security objectives and goals, are externally determined (Hoffman, 2020).

Jamaica, and other CARICOM states, while having the ability to espouse activist rhetoric often times are tied in the kinds of ensuing governmental actions that can be taken. While Haiti is exploited due to its resistance against imperialism, other countries in the region are subservient to Western capital and other elite interests which purport an unattainable dream of development—so long as they stay in their exploitable or minor reform friendly positions. After all, it was during Manley’s administration that Jamaica spied on its more radical regional neighbors. And it is during times of conservative governance where Jamaica experiences an increase in security funding, aids, and grants (the difference in this type of Western support is most clearly illustrated in comparing external support that Manley got versus Seaga).

Jamaica’s security history and its acceptance of a Canadian military base in its country (OSH-LAC), makes its political class a willing participant in ensuring Haiti remains under western occupation. Thus, when Canada calls on CARICOM to intervene in Haiti, we can expect Jamaica to be a leading force in that intervention—unless our opposition to it is vocal, as our understanding of the ‘why’ becomes clearer.

Hoffmann, Anne M. 2020. “The Finances of the Caribbean Community (CARICOM)” In The Finances of Regional Organisations in The Global South: Follow the Money. Routledge.