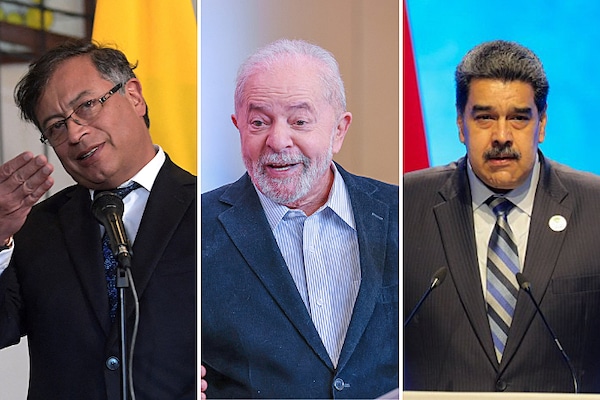 Petro, Lula, and Maduro agreed upon convening a South American summit for the Amazon rainforest – Reprodução

The recent victories of progressive candidates in presidential elections in many South American countries have reopened the debate on new regional integration mechanisms. The signs sent by presidents such as Gustavo Petro from Colombia, and Brazil’s recently elected president, Luiz Inácio Lula da Silva (Workers’ Party), about the urgency in protecting the Amazon rainforest and fighting climate change indicate that the environmental agenda may be a crucial topic for the bilateral relations between South American governments.

In addition to it, the proposals made by Petro, Lula, and Venezuelan head of state Nicolás Maduro during COP27, which took place in November in Egypt, signed that Venezuela could be part of these environmental efforts since the three leaders agreed upon convening a South American summit with all the countries that have portions of the Amazon rainforest inside their borders.

To Brasil de Fato, Foreign Affairs professor Giorgio Romano, a member of the UFABC Foreign Policy Observatory, stated that the stance adopted by the presidents during the climate conference in Egypt set the tone for the importance that the environmental agenda will hold.

“The environmental agenda will probably be the key issue of the new attempt to integrate South America. However, the axis won’t necessarily be trade, but environmental issues, including those associated with socioeconomics and technology. More than a priority, it’s an opportunity,” he said.

The urgency of the topic may be one of the factors that will boost discussions on environmental preservation in South America. According to data from the National Institute for Space Research (Inpe, in Portuguese), the Amazon deforestation rate increased by 73% in the first three years of President Jair Bolsonaro’s term.

“The world needs leaders in this area [environment preservation] and is seeing in Lula this kind of figure, mainly due to his previous administrations, but also because of the contrast between his and the Bolsonaro government. South America may benefit from it,” Romano stated.

He also highlighted the importance of convening an Amazon Cooperation Treaty Organization (OTCA, in Portuguese) summit, a proposal supported by Petro, Lula, and Maduro. “There are eight member countries, including Peru, Ecuador, and Suriname. However, Colombia’s participation is fundamental and, of course, by reintegrating Venezuela, it is possible to help normalize relations with the country,” he said.

Excluded from many of the recent regional cooperation initiatives in which its neighboring countries were being headed by right-wing governments, Venezuela sees in the return of progressive presidents the possibility to resume diplomatic prominence in the region and move away from economic and political crisis.

For Romano, the current political frame in South America may benefit Venezuela in its intention to end the US blockade, because “[with Venezuela] integrated into South America, the country might have more bargaining power.” Besides it, he adds, its participation in regional initiatives would make Americans more prone to negotiate.

Joe Biden himself and the Europeans are already getting closer to Venezuela and forgetting about [former deputy Juan] Guaidó. Therefore, the next step might be to withdraw sanctions.

Since the beginning of the year, the US government has already sent a delegation to Venezuela on two occasions to discuss directly with Maduro’s government solutions to a possible resumption of energy supply. It was interrupted by the sanctions Donald Trump imposed on the country in 2019.

During COP27, Maduro met French President Emmanuel Macron and Portuguese Prime Minister Antonio Costa, which suggests a decrease in tensions between the Latin American country and Europe. These signs from the West to Venezuela come amid a fuel emergency caused by the war in Ukraine. In this context, Venezuelan oil reserves could provide relief for European and US markets.

“But it’s not just about oil,” Romano says. In his opinion,

the US should not fall off the train of history, since today there is an alternative: China. So, if Washington doesn’t recreate a good neighbor policy, the Latin American countries won’t kneel anymore, asking ‘please’.

Romano added he believes Lula’s next government may have a role in the reapproach between Caracas and Washington,

not in front of the cameras, but backstage, talking to the Biden administration about cooperation with South America and discouraging sanctions and divisions.

With the possibility of being reintegrated and considered a crucial part of the advancement in policies to protect the Amazon, Venezuela is optimistic about the environmental agenda being a priority. Besides attending COP27 in person, Maduro had already mentioned the need to talk about the issue during his meeting with Petro in Caracas.

“There is no more time for speeches and laments. There is only one time to act radically and to work primarily towards a better world,” said Maduro during an address in Egypt.

Charles Giuseppi, who heads the environment and climate change session at the Venezuelan Ministry of Petroleum, says the country has to preserve its sovereignty while avoiding commitments that could negatively impact the nation’s energy industries, its primary source of income.

“In addition to our integrationist vocation, we have to consider that each country will have to adjust its environmental policy according to its own strategic needs. From the point of view of the challenges that each government has, they will have to calculate how much they will be able to give in to this pact, knowing that this affects the strategy each State adopts for its own development,” he told Brasil de Fato.

However, Giuseppi sees openings to sign agreements that respect the economic specificities of each country, especially if the talks are held in institutions such as Unasul (Union of South American Nations, in English) and Celac (Community of Latin American and Caribbean States, in English).

“There is a need to continue with the alliances formed in the first years of Lula, Néstor [Kirchner], and [Hugo] Chávez, with Celac and Unasur. But now, there is an environmental component. This is a call to action that takes into account the differences between center and periphery, developed and underdeveloped countries that are also oil producers,” he said.