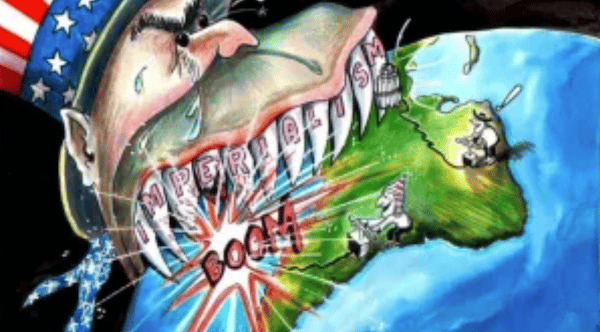 Although Humanity has evolved a lot up to date, contemporary U.S. administrations continue to use in their relations with Latin America a policy whose beginnings date back to 1823.

Time and again, they use it as a basis for justifying their actions: the much-used Monroe Doctrine, but it’s better known as “America for the Americans”, sought in its beginnings to ensure Washington’s dominion over lands that were colonies of European metropolises, such as Spain.

Almost two centuries after this idea was first put forward, in the 21st century, the then U.S. Secretary of State, John Kerry, in a speech before the Organization of American States (OAS) in 2013, declared the Monroe Doctrine dead when he assured that its era was over.

Five years later, in September 2018, speaking at a high-level debate in the UN General Assembly, then U.S. President Donald Trump “revived” it.

Here in the Western Hemisphere, we are committed to maintaining our independence from the intrusion of foreign powers, he said in reference to the support that China and Russia were giving to several Latin American nations.

According to Trump at the time, formal U.S. policy since President James Monroe (1817-1825) dictates that “we reject the interference of foreign nations in this hemisphere and in our own affairs”.

With the stroke of a pen, the words of Kerry, who was part of Barack Obama’s cabinet (2009-2017), were erased, while Joe Biden was at that time the Vice President of the United States.

In January 2021, Biden assumed the presidency of the North American nation and many questions arose as to what his position would be towards Latin America and the Caribbean during the next four years. After all he had campaigned to improve relations with Cuba which Trump had buried under 243 additional sanctions.

Would he re-bury the Monroe Doctrine, and what policies would guide his relations with the region? The questions are many, as are the expectations.

First, we should go back to the third president of the United States, Thomas Jefferson (in power from 1801 to 1809), who formulated the idea of the “Western Hemisphere” to refer to the American continent.

In short, he postulated that the populations of the American hemisphere, from north to south, have a special inherent, unique and natural relationship among themselves, well-differentiated qualitatively and separated from their links with the extra continental world, explained Cuban researcher Raúl Rodríguez.

But in reality, this doctrine is based on the phrase:

The American continents, because of the free and independent condition they have assumed and maintain, should no longer be considered as susceptible to future colonization by any of the European powers.

The Monroe Doctrine is one of the many means by which the United States has been expanding its hegemonic eagerness over the Latin American and Caribbean region since the early stages of its existence as a nation, Rodriguez pointed out. Over the years, he added, this policy has been reworked and adjusted.

Such is the case of Pan-Americanism, highly questioned by Cuban National Hero José Martí, since it was constituted as a way of institutionalizing imperialist domination over Latin American peoples at the beginning of the last decade of the 19th century.

This is maintained in the context of the transition to the imperialist stage in the United States and continues to the present day, including the creation of the Inter-American Treaty of Reciprocal Assistance, in 1947, and the OAS, in 1948, the expert explained.

Both are pillars of the system currently comprising the Inter-American Development Bank and a multitude of other entities.

More recently, said Rodriguez, the idea of the Western Hemisphere has formed the conceptual basis for other regional summits and periodic meetings of heads of state and government that have been held regularly since the Summit of the Americas in Miami in 1994.

Currently, the fundamental feature of the validity of the Monroe Doctrine is the strengthening of the inter-American system, with emphasis on its economic, political, institutional and military components.

All this in order to consolidate a bloc to counteract the economic and technological ascendancy of China and the political, diplomatic and scientific challenge represented by Russia, said the Cehseu director.

In addition, the aim is to unify and extend the model of representative democracy and market fundamentalism, that is, the U.S. capitalist model as a formula for the entire continent, he stressed.

Remember that the region of the world that inspired the first doctrinal formulation of foreign policy in the United States—Monroism—was, precisely, Latin America.

Therein lies the old pretext that the powerful neighbor to the North protected the interests of our countries against the appetites of the old European colonial powers.

But now they revive it in a new form to argue objections to the Chinese and Russian presence in the continent and, as it is clear, what is really at stake is will the U.S. hegemonic grip prevail in the geopolitical dispute taking place in Latin America, said Rodriguez.

Old Policies that Refuse to Go Away

Also almost 200 years ago, U.S. President James Polk concurrently decided in 1846 that his country’s “manifest destiny” was to expand, and he waged war against Mexico.

Mexico lost more than half of its territory to the Americans, who took over the lands that now make up California, Utah, Nevada, Arizona and New Mexico.

Then, in 1898, U.S. President William McKinley invaded Spanish colonies in the Caribbean, such as Cuba and Puerto Rico (the latter territory remains to this day).

And lets not forget that Haiti, Dominican Republic, Panama, Grenada, Nicaragua, Guatemala… are on the long list of countries that were invaded and occupied by Washington.

Meanwhile, the U.S. Central Intelligence Agency has backed military coups in Argentina, Chile, Guatemala, Haiti, Honduras, and more recently in Venezuela and Bolivia, as revealed by its own analysts.

When Trump invoked the Monroe Doctrine in 2018 by name, experts in the area warned that the mere mention of that policy awakened the historical memory of the repression from numerous military and economic interventions promoted by Washington in Latin America.

Historically, it is just a given that the leaders of the North American nation perceive Latin America as a sort of extension of their territory, the so-called “backyard”.

Given their geographic location, the countries of the area are the closest source of raw materials and natural resources, and also in geopolitical terms, they are considered important for the national security of the United States, according to Jorge Hernandez, a Cehseu specialist.

U.S. interests in the region are based on a geopolitical conception and the need to build a sphere of influence, that has been the perspective once the U.S. nation reached the imperialist stage, he said.

Invasions, interventions, the establishment of military bases, the plundering of natural resources, interference in the internal affairs of other countries, subversion plans, sanctions and blockades… are elements of Washington’s strategy, which is repeated, with one variant or another, throughout history, both distant and recent.