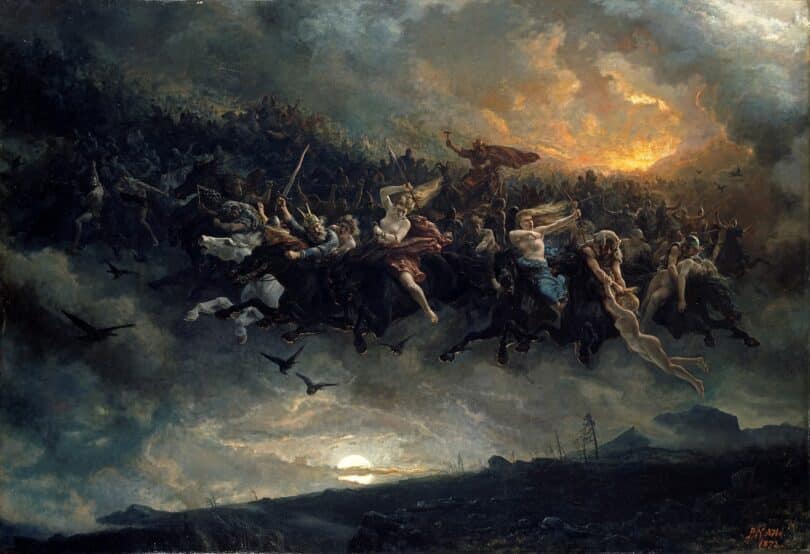 1. We take winter for granted as the frozen backdrop that gives so many Christmas traditions their meaning. Even in warm climates, frosted landscapes persist in the holiday imaginary. The origins of this setting lay in the Pagan roots of the season. Typically held around the darkest of days, the Winter Solstice, Pagan Yule was a celebration of hope within hopelessness, occasioned by the coming of the brutal northern winter. In the Scandinavian countryside, cold temperatures could bring famine and death, and the weather itself was often linked to supernatural causes of misfortune. In the winter winds, a procession of the wraith-like undead could be heard, moving across the skies, reaping new souls. The Yule Log provided light amid this darkness and terror, symbolizing the coming of longer days. Food and drink were enjoyed with abandon. And greenery was hung to remind that life both persisted and would return again.

2. If Pagan Yule was a way of coping with the winter, it was also necessitated by it, serving as a natural break within the rhythm of the seasons. Crops were harvested in late fall and early winter, making food available for large feasts just as the cold set in. Brewed ales, which required the fermentation of grains from those crops, were also ready by winter. And cattle were best slaughtered in the wintertime as well, both so that leftover meat could be frozen in the snow, and so the food used to feed them could be  spared. It was not that a break was taken from work so much as that work itself required this break, married as it was to the temporality of the seasons. The fruits of labor could be enjoyed at a time when labor could bear no more fruit.

3. Today, we celebrate Christmas as a vestige of this respite from work and of hope amid hopelessness. And yet in the Christmas of bourgeois fantasies, our relationship to winter has changed. If for Pagan Yule, winter was the cold darkness that necessitated the ritual conjuring of the light, both real and metaphorical, winter has today been folded in to participate in that hope itself. It is still only against the cold that our holiday rituals make sense—fireplace fires, mulled drinks, sweaters. Yet winter is itself now also a site of enjoyment; no longer hostile and foreboding, it is now domesticated and tamed—a site of leisure and play that performs its own part in winter fantasies. Its great symbol is the snowman—a conquered nature made over in the image of man. Meanwhile, the terrifying undead in the winter winds of the Wild Hunt, led by the Pagan god Odin on his eight-legged horse, have been replaced by eight tiny reindeer and a portly man bearing gifts. Nature now gives rather than takes. Barren winter has become its own source of plentitude.

4. These fantasies of Christmas abundance are fantasies of escaping time along with the labor that marks it. To understand the ideological work they do, we can look to the allure of freshly fallen snow. To be sure, no seasonal phenomenon is more fleeting or historical: snow leaves traces of its former life in puddles, points to the past by recording footprints, and dirties with the hours. Yet so often in our holiday myths, whether in children’s books or Lexus commercials, snow is presented as pristine and undisturbed, bearing no traces of history, no traces of the labor done in, around, and despite it.  In this quiet, undisturbed, enchanted landscape, nature and culture can appear reconciled—peace on earth mirroring goodwill towards men. Even the terrifying Pagan night has been defeated as the moon’s reflection off the snow gives “a lustre of midday to objects below.” Like the commodity, winter has become plenitude without production. All is calm, all is bright.

5. The climate crisis gives the lie to this eternity. If before, winter could be taken for granted as the stable background that gave holiday rituals their timeless meaning, or as the pristine surface onto which we could project fantasies of a reconciled, post-scarcity world, today winter has become a volatile character in—not just a setting of—the drama, threatening to turn into its very opposite. Or maybe winter here is more like a frigid tide, threatening to recede and leave our holiday rituals stranded on some temperate shore, shorn of context and purpose. In either case, what is expressed in the rising temperatures is not only a threat to holiday meanings but their buried ideological truth: insofar as our seasonal rituals and iconography perpetuate a myth of abundance without labor, a warming planet is merely another fevered worker mistaken for a happy elf that can work without fatigue, give without getting, and produce a bounty without cost.

6. The threat that climate change poses to Christmas eternities is the threat that disorienting linear time poses to the comforting circular time of ritual—a threat latent within the season’s own sacred precedents. Coming at the end of the calendar year, the holiday season encourages us to see its tropes of repose and wintery leisure as signifying an arrival of sorts at which we are released from linear time into holiday ecstasy. The myth of Santa redoubles this theme with its own take on anticipation and fulfillment, locating its particular eternity in consumer bliss. Yet with the Christian season of Advent, the season of “expectant waiting,” this breaks down. If Advent partakes of eternity by celebrating the silent night, holy night of Christ’s arrival, its greater work is to point the faithful beyond Christ’s first coming to his second—to more waiting—and to the eschatological linear time along which Christians throughout the millennia have worked for redemption. Like the Yule log, Christ is a flame that points beyond itself to a greater warmth that is coming. Yet if climate change, too, points our concerns toward end times, then it cannot but convert the coming warmth of redemption into its opposite—into damnation.

7. Climate change, that is, introduces an ironic twist on the Christmas season’s themes of weather as judgment. In the punishing skies of the Scandinavian winter, Pagans envisioned Odin’s army of the undead as having come to reap unprepared souls for the Underworld. In the Christian tradition represented by Milton, winter again represents punishment: after the fall of Adam and Eve in the garden, the cold is ushered in as paradise lost, leaving warmth, with echoes of the Yule flame, to become a signifier of redemption. With climate change, it is as though, in the millennia since the Fall, the compounding sins of the monied and powerful had turned even paradisiacal warmth into something hellish. Except that the path to redemption has also changed: if Christianity is concerned largely with the relationship of individual acts to ultimate redemption, and if the Santa myth repeats this concern on the level of naughty/nice lists, climate change cannot but make a mockery of these efforts to seek salvation by way of anything other than the collective.

8. And yet this notion of climate change as judgment, threatening wintery Christmas bliss, is complicated by the fact that our conceptions of this bliss were themselves partly created by climate change. The father of our modern conception of Christmas, Charles Dickens, grew up during the Little Ice Age, a century-spanning period of global cooling that produced a white Christmas the first eight years of his life. Temperatures in the northern hemisphere dropped by 0.6°C. The Thames River would even periodically freeze, enabling Frost Fairs on its hardened surface—enchanted winter wonderlands where books, toys, and trinkets were sold. Contributing to the cause was the sequestration of as much as 38 gigatons of carbon through the reforestation of millions of hectares of cropland, which had been abandoned by indigenous victims of fifteenth-century colonial genocide.

9. Snow covers, snow conceals. If in places it becomes black with the labor of cities, it is always quick to cover those traces once again. In the industrial England of Dickens’ youth, snow would have blanketed the forsaken factory landscapes where the poor lived and worked, temporarily relieving residents of having to confront those signs of blight and toil. We find snow playing this ideological role in Dickens’ stories, despite a sympathy for the working class noted by no less a critic than Marx. In A Christmas Carol, a white Christmas morning is the backdrop to Scrooge’s newfound goodwill toward his employee, Bob Cratchit. But just as the squalor of the poor stays hidden in winter for only as long as the snow doesn’t melt, so too is Scrooge’s benevolence—offered in the form of charity and wages, not a share in ownership—destined to remain only a temporary balm.

10. Fire created the winter. It was the warmth of the flame that allowed early humans to venture up into the cold and experience it as a distinct season without succumbing to it. If winter’s subsequent returns necessitated Pagan rituals of fire and abundance, then more recently, it is our rituals of fire and abundance that have, in the form of fossil capital, folded back to affect the winter. So it is now this volatile winter that requires us to revisit our fires once again, and again out of need for survival, even as December lawns entertain the eternities of plastic snowmen. If rising temperatures mean that the new flame must restrict itself to providing a more circumscribed form of heat and light, then it will have at least partially if bittersweetly fulfilled the original desire of the Yule flame, which is to not be needed at all.

Robert Jackson Wood is a writer, scholar, and political organizer living in Brooklyn.