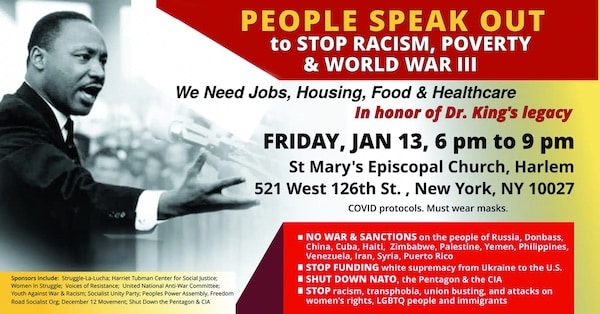 As 2023 begins, it’s undeniable that a dangerous, virulent fascist movement is spreading through U.S. society.

It’s seen in the spread of hate-ridden protests against drag story hours, sometimes attended by armed neo-Nazis, who threaten children, parents, and LGBTQ+ communities, and in the bomb threats targeting medical facilities that provide gender-affirming care to trans children and abortion services to people who can become pregnant.

It takes the form of mass shootings, like the massacre of 10 Black people at Tops grocery in Buffalo, New York, five queer people at Club Q in Colorado Springs, and 19 students and two teachers at an elementary school in Uvalde, Texas. We recognize it in the targeting of electrical grids from North Carolina to Washington state to sow fear.

At the local level, the fascist influence is evident in the rash of attempts by astroturfed “parents’ groups” to ban books that expose the racist history of the U.S. or validate the lives and experiences of LGBTQ+ people.

At the state level, we see it in the efforts by officials in Texas, Ohio, Florida, and elsewhere to eradicate trans health care, criminalize parents who support trans children, and create a lynch-mob atmosphere against women and others who choose to get an abortion.

At the national level, there is the far-right-controlled U.S. Supreme Court, which gutted voting rights, struck down the constitutional right to abortion, and seems poised to do the same to same-sex marriage.

Looming over it all is the shadow of Jan. 6, 2021, when an organized fascist mob attempted a coup d’etat at the Capitol in Washington, D.C., to keep Donald Trump in power—aided and abetted by a faction of the Pentagon.

Fascist tendencies have existed in the U.S. since it began its rise as an imperialist power in the late 19th century—from the Ku Klux Klan to the John Birch Society to today’s Proud Boys and Oath Keepers. Sometimes the ruling class of bosses, bankers, and landlords keep them on a tight leash.

But when times are tough, when they fear the masses of poor and working people could unite and fight back against their unjust capitalist system, the fascists are let off their leash to spread division and, if necessary, physically exterminate those the rich and powerful fear most.

As top dog of the world imperialist powers—including Britain, Japan, and the European Union—the U.S. has long upheld fascists in its efforts to wring the maximum profits out of the world’s people.

Washington has abetted fascist dictatorships or those with strong fascist aspects, from the Shah of Iran to Suharto in Indonesia, from Pinochet in Chile to Áñez in Bolivia.

During the Cold War against the USSR, the U.S. encouraged the growth of violent fascist movements like the Organization of Ukrainian Nationalists and its post-World War II successors. The U.S. and Canada harbored its leaders, gave them money and weapons, and encouraged their hate propaganda against multinational Soviet socialism.

The many neo-Nazi movements in Ukraine today, like Right Sector and Azov Brigade, are descendants of this lineage.

But that’s not all. The destruction of the USSR and European socialist camp 30 years ago brought economic devastation and plummeting life expectancies. Washington stepped into the ideological vacuum to spread division and prevent a revolutionary response to the cataclysm.

One way it did this was by spreading U.S.-style white supremacy through the capitalist media. Another was to encourage far-right U.S. evangelical movements to spread anti-LGBTQ+ and anti-woman hate.

This happened under both Democratic and Republican administrations and prepared the ground for the growth of fascist movements and reactionary government policies in Eastern Europe that plague the region today.

I’ve been writing about Ukraine since the U.S.-backed Maidan coup toppled the elected government in early 2014. Fascist groups were at the heart of this “revolution of dignity.” They hobnobbed with the likes of the late Republican Senator John McCain and Democrat Victoria Nuland, who today is Joe Biden’s Under Secretary of State for Political Affairs.

I’ve interviewed, spoken to, and visited courageous Ukrainian anti-fascists who resisted. Many were forced to flee east to avoid death. Others were imprisoned and later traded in exchanges for captured Ukrainian soldiers. Today many of them are fighting on the side of the Donbass and Russia.

The neo-Nazis who provided the backbone of Maidan went on to massacre 48 unarmed activists at the Odessa House of Trade Unions on May 2, 2014. None of the perpetrators have been punished. Many survivors, however, were jailed or driven into exile.

Washington preferred its new puppet regime in Kiev to be fronted by more media-friendly faces like oligarch Petro Poroshenko or TV comedian Volodymyr Zelensky. But it made sure the fascists became integral to the repressive bodies of the state, including the Armed Forces of Ukraine, providing them extensive training in the use of Western-supplied weapons.

These neo-Nazis, under various names, also set the tone for the new regime’s virulently anti-Russia and anti-communist ideology. One of the government’s first acts was to ban the use of the Russian language—the daily language of those living in eastern Ukraine. They spoke of working-class residents of the east—especially in the Donbass mining region—as “insects” and “subhumans” to be cleansed.

The writing was on the wall. People in the east—and antifascists throughout the whole of Ukraine—rose up. In most places, they were violently suppressed. But in the Donbass regions of Donetsk and Lugansk, the people seized power and declared themselves independent anti-fascist republics.

Ukraine—with the backing of the U.S. and the NATO military alliance—then waged war on the people of Donbass for eight years, killing more than 14,000 people and setting the stage for the escalation of the conflict between Ukraine and Russia in early 2022.

Fascism must be fought

For a few years in the late 2010s, articles sometimes appeared in the U.S. corporate media highlighting Ukraine’s “Nazi problem.” Some even exposed links between the Ukrainian far right and white supremacist groups in the U.S., like the Rise Against Movement, which participated in the white supremacist riot in Charlottesville, Virginia, where anti-racist protester Heather Heyer was murdered in 2017.

This is not surprising. It’s common practice for U.S. media to be used to keep dependent regimes in line, to remind them that “we made you, and we can break you.”

But when Washington, Wall Street, and Big Oil decided in 2021 that it was time to go full-speed ahead with a proxy war against Russia, those kinds of exposés vanished. Once Russia was backed into a corner and forced to intervene militarily to prevent a genocidal slaughter in Donbass, any discussion of Ukraine’s “Nazi problem” became an unspeakable heresy for the media and liberal mouthpieces on social media.

Today it is common to see Ukrainian soldiers in the media sporting fascist symbols. But the media ignore the symbols, and anyone who dares to point them out is labeled an agent of Vladimir Putin.

The people of Donbass don’t have that luxury. They had to fight, arms in hand, to protect themselves from the fascist threat, and today they must continue to do so as Ukraine rains bombs, mines, and artillery on civilian targets in Donetsk and other cities.

Unite against fascism and imperialism

It’s a tragedy of history that those fighting the rise of fascism in the U.S. and Ukraine are mostly unable to recognize one another.

Just as imperialism spread hate propaganda in the former Soviet countries to sow division, so has it co-opted the language of protest movements, the tactics of anarchism and social democracy, and used nonprofits to confuse people in the West and turn natural allies against each other.

A growing grassroots movement in the U.S. is resisting fascist threats on the lives of the most marginalized communities. This is a great reason for hope.

However, if this movement cannot recognize other genuine anti-fascist struggles and learn from them, if it does not learn about the class nature of imperialist war, it will remain isolated and unable to respond to the underlying causes of fascism.

What’s lacking is not only a basic, class-conscious understanding of what fascism is and how to fight it. The fundamental Marxist understanding of imperialism and war, as explained by Lenin, has been lost to many movements that have emerged in the 21st century.

Opposition to imperialist war and support for its military defeat is not based on political agreement with the non-imperialist countries under attack but an understanding that imperialism’s defeat is a fundamental prerequisite to liberation.

Those who claim to want liberation for LGBTQ+ people in Russia and women in Iran, freedom for Palestine, or a socialist future for Ukraine and Venezuela but who do not do everything in their power to facilitate the defeat of U.S. imperialism internally and externally are misguided at best.

Those who held mass protests in Ukraine against the Maidan coup and those who came out in the streets to defend drag story hour in Queens, New York, are part of the same fight—even if those on both sides cannot see it at the moment.

It’s the job of communist revolutionaries to build bridges of understanding and mutual struggle.

Marxists have revolutionary optimism because we know history never presents people with a task without the means to carry it out. The knowledge, tactics, and forces to defeat imperialism and fascism exist. The numbers who understand them are small for now.

But circumstances demand that knowledge be shared, studied, and put into practice. We must prepare to do so, even if we have to fight to get a hearing.