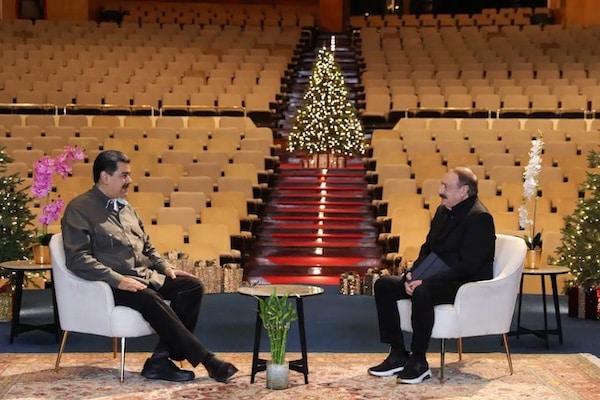 In highlighting Venezuela’s economic recovery in 2022, President Nicolás Maduro noted that for more than 100 years, Venezuela imported “practically 80, 85% of everything that was consumed, today it produces 94% of the food that goes to Venezuelan homes.”

During an interview with Spanish journalist Ignacio Ramonet, reporting on the beginning of the new year, Maduro highlighted the efforts of the people and the government to confront the over 900 unilateral coercive measures levied by the United States Government and its allies. “Criminal sanctions against the entire Venezuelan society, against the economy, against the productive apparatus, against the oil industry, which is the great industry of Venezuela,” he said.

President Maduro also pointed out the importance of continuing to build an economic model independent of oil income, despite the lifting of the blockade against Venezuela. He then stressed that this is “the path we have to follow. It is the path that I set out to tell all the economic sectors, all the political sectors, all of Venezuela.”

Maduro pointed out that the path towards the diversification of the economy must be “drawn very well. Venezuela has what it takes. Venezuela has an industrial ability outfitted with a good technological understanding, with a good productive capacity, and is demonstrating it.”

The president lamented how “for more than 100 years Venezuela lived only on the petrodollar” and recalled the phenomenon of how “on the one hand, the stream of dollars came in, and on the other hand, it was spent with a gigantic chequebook to import everything that Venezuela consumed.”

“Practically 80, 85% of everything that was consumed in Venezuela was imported with petrodollars,” he said.

And that led Venezuela to have one of the highest levels of public spending and quality of life, especially in the era of Comandante Hugo Chávez.

More room for growth of the real economy

Ramonet pointed out that “there really is a majority opinion” that “the year 2022 has been spectacularly positive for the Venezuelan economy.” He highlighted that the Venezuelan government achieved “a victory that many people thought was impossible, defeating hyperinflation,” and cited data from the Central Bank of Venezuela indicating growth “of almost 19%, while ECLAC is talking about a growth perspective of 12%.”

In this regard, Maduro explained that the nation is experiencing “industrial growth with great impact. And above all, there is important industrial growth, but that still leaves a large gap where we can grow even more.”

“Venezuela has double-digit growth this year. The Central Bank of Venezuela has already shown some important figures, and ECLAC has also shown some figures. And that growth, I can tell you, for the first time in more than 100 years, is a growth of the real non-oil economy,” he explained.

It is the growth of the economy that produces food, goods, services, wealth; that pays taxes as well, because we are breaking records in the collection of taxes for 2022.

Venezuela, I can say today, is experiencing the first stage of a long cycle of recovery and structural growth, of a new structure, of a new economy, and from there, we will continue on our way.

President Maduro indicated that it is a record and an “agricultural miracle” that in only a few years, the country managed to end its food dependency, which was used to try to subdue it.

The fact that hundreds of producers, rural entrepreneurs, have started to work, to produce, and that their product reaches the country’s main markets and goes directly to homes.

“We are laying the foundations for a structural recovery process,” Maduro explained.

The first step was the activation of 18 engines of the Bolivarian Economic Agenda. The second: the establishment of a new Venezuelan exchange system. And the other, a set of decisions and measures that have been taken to protect the entire industrial system, the entire agricultural production system, the entire banking system of Venezuela.

He said these measures are “a set of successful public policies that were agreed upon with every economic, social, and political sector of Venezuela. They emerged from debate, from conversation, from dialogue. We are laying the foundations for this recovery” after the nation suffered the terrible damage caused by sanctions.

“These are gigantic figures,” he continued.

For a country to go from receiving $56 billion to receiving $700 million in a year is a catastrophe. However, thanks to the social policy of the revolution, to the social missions of the revolution, we were able to withstand the devastating impact of the sanctions, the persecution and this war. They were economic missiles, missiles launched against the entire economy, against all of society.

Maduro pointed out that “it was the most damage that could be done to an economy coming out of underdevelopment,” especially if it is “subjected to imperialist harassment and persecution.”

Maduro also referred to the dangers looming over the current economic momentum. He pointed to the recent rise in the dollar in the illegal foreign exchange market as “a big disturbance.” He added,

these are the wounds that remain from the instruments of the phase of economic war that we are progressively overcoming.

He warned that there are sectors that “through cryptocurrencies, intend to rule the exchange in a speculative way, with clear political intent.”

Maduro responded to those who intend to attack and reverse the economic recovery by speculating on the price of foreign currencies circulating in the nation by saying that his government will design, in conjunction with “all the economic sectors of the country, a stable exchange system” to defend the currency. This way,

the economy will operate with virtuous circuits from now on.

He also pointed out that distortions are being combatted by the government and that the exponential growth of the flow of transactions in December, an increase of 700%, has made the work difficult.