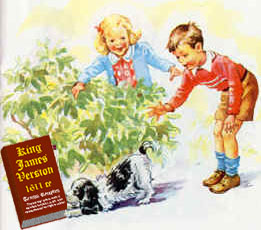 See the Bible. The Bible is a textbook. It is all you will ever need to know about anthropology, zoology, astronomy, psychology, or nuclear fission. Why is the Bible all you need to know?

Because President George W. Bush said that the theory of “Intelligent Design” should be taught along with the Darwinian theory of evolution in your nation’s public schools. Your President stated, “I feel like both sides ought to be properly taught.”*

Your President was being silly. By “both sides,” your President implied that religion and science have equal bearing on the question of the origin of life on planet earth. This is like comparing apples with oranges. Everyone knows you can’t compare apples with oranges, or religion with science. Silly, silly Mr. President. He forgot the importance of having only one frame of reference!

That is why we America-First Fundamentalist Nutjobs for Global Domination in Christ have overthrown your government and raptured your President and his Administration up to heaven, where they can watch while we read to you from our new, intelligently designed grade school edition of the Book of Genesis.

“Yes, Jane,” said Dick. “But first, you must bring me a beer.” And Intelligent Design said it was good.

See Dick and Jane play! See them run and frolic! Intelligent Design has given them dominion over all the animals and birds and creeping and crawling things of the earth. See Dick and Jane stomp on worms. See them club baby seals. See them throw beer cans into ravines. Dick and Jane are having fun, dominating their miraculous paradise! 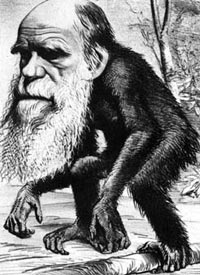 The only thing that Dick and Jane are NOT allowed do is play with monkeys. Why are Dick and Jane not allowed to play with monkeys? Because monkeys are ugly and flea-bitten? Yes, and because it is a well-known fact that monkeys are low-life social climbers that will evolve into people like Charles Darwin and Clarence Darrow and Jane Fonda, who seek to destroy civilization by promoting secular humanism and gay marriage. Back to our story.

Ha ha! See Dick point at Jane. Jane’s stomach is big and funny. Does Jane need to go on a diet? No, Intelligent Design has blessed Jane with a pro-life miracle!

See Jane have morning sickness. See Jane stagger into a thicket. Retch, Jane, retch. Uh-oh — Jane’s vomiting has attracted the attention of a big ape. For Biblical reasons, we shall call this ape “Lilith.” See Lilith be ugly. See her glare righteously. See her raise her fist, defiantly. Lilith has just returned from a women’s music festival.

“Tsk tsk,” says Lilith. “Jane, what are you thinking? You are eight years old, for chrissake. Dick is your brother — you can’t go through with this.”

See Lilith offer Jane a birth control pamphlet. “So you shouldn’t worry, here’s the name of a doctor who can help — even in your third trimester.”

See the wind rise and the heavens darken. See the storms rage and plagues of locusts ravage the land. See Dick and Jane forced to watch 36 hours of films demonstrating in excruciating detail the horrors of partial birth abortion.

Now see Jane and Dick check into a cheap motel. They cannot check into a hospital because Intelligent Design has cancelled their health plan. See them rend their garments. Hear them scream and throw lamps and ashtrays at one another. Why are they rending, screaming, and throwing?

Because, according to the Gideon Bible on their cheap bedside table, Dick and Jane are supposed to be together. Because a baby needs a mother AND a father. Because Dick and Jane were created by Intelligent Design, which has an IQ of 766,549,827,110.09 and has never made a mistake — unlike those evil Darwinians, with their America-bashing arms control treaties and their get-out-of-Iraq buttons and their condom-pushing sex-ed classes, unlike — Oops! Jane’s water has broken!

See Jane go into labor. Push, Jane, push! Now, it is Dick’s turn to vomit. Look and see! Forty-seven hours later, a baby is born! And not just any baby — this is the Baby Jesus!

The Baby Jesus will grow up and become very wise and holy, and invent the steam engine. He will sponsor all sorts of crusades and slave trades and inquisitions and bake-sales, until one day He is tricked by a wicked anthropologist into visiting the Bronx Zoo, where He is stomped to death by a lesbian gorilla. Which just goes to show: it is very hard to get a proper education in today’s America.

On, now, to our next chapter, in which the Baby Jesus comes back and gets revenge. Hurry, children — we don’t want any of you to be left behind.