Industrial salmon farming corporations have learned an important lesson from their corporate cousins about what to do with their tarnished images of ecological and social injustice: simply pour money into a public relations campaign and overwhelm dissent.  After years of bad publicity, the salmon farming industry is adopting a damage control PR campaign. A recent example of the industry’s multinational makeover strategy is the half page ads that ran in the New York Times, USA Today, the Boston Globe, and the San Francisco Chronicle claiming that Ocean-Farmed Salmon is “Good for you. Good for the Oceans” (October 2005).  The ad reveals a campaign logic that promotes farmed salmon as an independent object, with little relation to the workers or ecosystem required for industrial food production.  This example of commodity fetishism is nothing new.  Equally telling is how Hill and Knowlton (a notorious PR firm) set the stage for the current campaign through its prior work on behalf of the British Columbia salmon farming industry.1 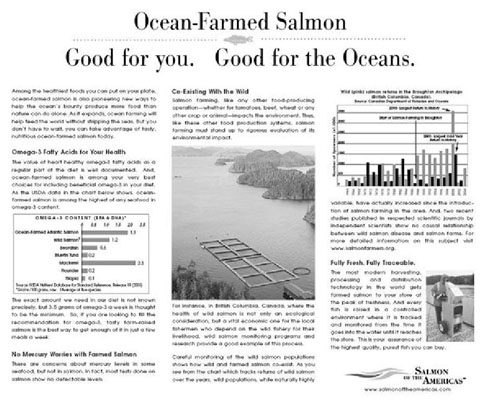 The sponsor of the above ad, Salmon of the Americas (SOTA), is a promotional trade organization with a Board of Directors that represents a handful of the largest salmon farming industries in Canada, United States, and Chile.  SOTA was organized in 2003 by salmon farming corporations to repair the industry’s blemished image. SOTA has employed the PR firm MarketShare to convince consumers to buy more farmed salmon. The ad begins:

Among the healthiest foods you can put on your plate, ocean-farmed salmon is also pioneering new ways to help the ocean’s bounty produce more food than nature can do alone.  As it expands, ocean farming will help feed the world without stripping the seas.

By emphasizing health, presenting technology as a helpful friend of nature, and employing the rhetoric of “feeding the world,” the ad builds the illusion that global markets do no harm to nature and human beings.  While the public is familiar with the problem of overfishing, the current media campaign would have us believe that farmed salmon are miraculously free from it.  The SOTA-sponsored ad assures the reader that through careful monitoring wild and farmed salmon can co-exist. In fact, the salmon farming industry is based on the “stripping of the seas” through its reliance on fish-based feeds such as anchovy, sardines, and other lower-food-chain species. The only true “miracle” of the capitalist food industry is the achievement of lower commodity prices through high non-market ecological and social costs. Ironically, the SOTA ad also breezily declares that salmon farming is “like any other food-producing operations,” as if salmon cultivated like other foods grown on intensive monoculture plantations and combined animal feedlots could be safe.

SOTA’s PR effort focuses attention on farmed salmon as merely a “tasty” commodity.  The SOTA website flashes recipes offered by top chefs to prepare the farmed-salmon meal that “matches your event, your schedule and most of all your taste buds,” appealing to the health and status conscious (excellent for “elegant entertaining” — “[s]moke cooking on a plank of cedar,” anyone?) as well as the chronically time-poor (the recipes will “get you out of the kitchen and on to other activities in record time”). The substance of SOTA’s PR emphasizes farmed salmon only as a finished meal rather than the result of multiple layers of productive forces.

Sophisticated public relations maneuvers are nothing new to salmon farming corporations.  In 2003, when sales of farmed salmon slumped due to publicity exposing toxic contamination, the British Columbia Salmon Farmers Association (representing fish farming corporations) hired Hill and Knowlton to provide the behind-the-scenes groundwork necessary to develop a positive media image.  Prior to the work for the BC Salmon Farmers Association (BCSFA), Hill and Knowlton’s “accomplishments” included managing public relations after the Three Mile Island nuclear plant accident, establishing the Tobacco Institute to promote cigarette smoking, helping Exxon recover from the Valdez oil spill, and selling the Gulf War on behalf of the royal family of Kuwait.  The BCSFA went straight to the elite (with over 70 offices in 37 countries) of transnational PR spin companies.  Hill and Knowlton’s background work allowed the BCSFA to issue 32 press releases in February and March of 2003 alone (compared with only 8 for the entire year of 2002).

The BCSFA states that about 70 percent of the media work is not visible, which means that the real heavy lifting in a PR campaign lies in message development, cultivation of strategic media relationships, and, most ominously, opposition monitoring and research: “It’s the stories that don’t appear in the newspaper that mean we’ve done our job,” says Mary Ellen Walling, executive director of the B.C. Salmon Farmers Association (qtd. in Cox, p. 83). Opposition monitoring is conducted through techniques such as those listed on Hill and Knowlton’s “Research and Intelligence” webpage:

We employ a host of proprietary research tools . . . to ensure our solutions are driven by true brand and audience understanding. We also directly monitor media, blogs and online communities. (Hill and Knowlton, “Research & Intelligence”)

The close monitoring of electronic and print outlets that provide a voice for aquaculture opponents is a key element of PR research necessary for effective counter-message development. Regardless of how Hill and Knowlton carried out its duties for the BCSFA, it is likely that their work made a lasting impression on BC’s salmon farming corporations.

A network of personal and business connections between producer corporations, promotional trade organizations, hired PR firms, and integrated media companies creates a nexus for capital and media.  Integral to the nexus is an advertising industry segment specializing in campaigns to hide the full consequences of producing industrial food commodities such as farmed salmon, feedlot beef, and factory chicken.  Knowing where and how this PR information is produced is one step towards ensuring that the corporate salmon farming industry is not let off the hook.

1 The report by Sarah K. Cox, “Diminishing Returns: An Investigation into the Five Multinational Corporations That Control British Columbia’s Salmon Farming Industry” (December 2004), provides information about aquaculture’s connection to Salmon of the Americas and Hill and Knowlton and informs much of this essay.

Rebecca Clausen is a doctoral student studying Environmental Sociology at the University of Oregon.