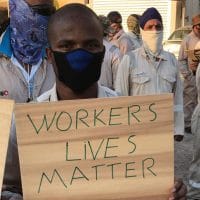 To imagine that a country as structurally classist as Kuwait could have ever succeeded in fighting a pandemic that was born from exploitation and thrives on inequality is the kind of naivety one dreams of achieving, so comforting must it be.

It has become commonplace to observe that the Conservative government of Stephen Harper has been re-making the symbols and practices of the Canadian state.  Canada, in this view, was once the social democratic heartland of North America.  But under Harper, Canada has been transformed into a hyper-regime of neoliberal market fundamentalism.  Nowhere, it is argued, […]

More than 100 of the 166 detainees at Guantanamo are starving themselves to death.  Twenty-three of them are being force-fed.  “They strap you to a chair, tie up your wrists, your legs, your forehead and tightly around the waist,” Fayiz Al-Kandari told his lawyer, Lt. Col. Barry Wingard.  Al-Kandari, a Kuwaiti held at Guantanamo for […]

Email-ID 1671459 Date 2011-12-07 00:49:18 From bhalla@stratfor.com To secure@stratfor.com A few points I wanted to highlight from meetings today — I spent most of the afternoon at the Pentagon with the USAF strategic studies group — guys who spend their time trying to understand and explain to the USAF chief the big picture in areas […]

Obama with a map of the Persian Gulf region in hand: “Excuse me!  Does this bus stop at Saudi Arabia, Kuwait, Bahrain, the United Arab Emirates, Qatar, and Oman?” Gervasio Umpiérrez is a cartoonist based in Montevideo, Uruguay.  This cartoon was published on his blog and by Rebelión on 1 November 2011; it is […]

I have been staring incredulously at my TV screen these past few hours as the story of Iran’s alleged assassination attempt of a Saudi diplomat in Washington unfolds in dramatic increments. Reporters keep repeating the theme “like out of a Hollywood script” as they eke out increasingly unlikely details about this “terror” plot. My immediate […]

Zainab al-Hosni, dubbed the “Flower of Syria,” who the Syrian opposition claimed was tortured and murdered, burned and decapitated, by the Syrian government, has just appeared on Syrian TV, very much alive.  Here is the video of the TV interview with Zainab, who says she fled from her family home because her brothers were beating […]

The Syrian uprising which erupted nearly six months ago seems to be settling into a dangerous deadlock with neither side — the regime or the opposition — willing to budge from its stated position.  The daily toll of deaths and injuries climb ever higher with no resolution in sight.  The regime seems insistent on […]

One of last month’s most interesting developments in Persian Gulf power politics played out not in the Middle East, but in Vienna, Paris, and Washington.  For these Western cities were the venues for an important series of exchanges that revealed much about the changing balance of power among the Middle East’s major oil producers, including […]

As Monday dawned, Turkey kept its fingers crossed in keen anticipation of the nationwide address by President Bashar al-Assad on the situation in Syria.  Ankara sent an open message ahead of Assad’s speech that if he failed to announce reforms even in a third attempt, he would “miss a big chance” to preserve power. Turkey […]

Seldom it is that the Russian Foreign Ministry chooses a Sunday to issue a formal statement.  Evidently, something of extreme gravity arose for Moscow to speak out urgently.  The provocation was the appearance of a United States guided missile cruiser in the Black Sea for naval exercises with Ukraine.  The USS Monterrey cruiser equipped with […]

An old story from Istanbul in the Ottoman era mentions a Turkish imam who killed a Christian and confessed the crime, whereupon he was advised by the judge to talk things over with the mufti who told him privately that a good Muslim never admitted felony against infidels and he should simply recant his confession.  […]

Russia went to the Group of Eight (G-8) summit meeting at Deauville as an inveterate critic of the “unilateralist” Western intervention in Libya, but came away from the seaside French resort as a mediator between the West and Libyan dictator Muammar Gaddafi.  The United States scored a big diplomatic victory in getting Moscow to work […]

The last thing Russian President Dmitry Medvedev did before departing for France to attend this week’s Group of Eight summit meeting in Deauville was place a call to Damascus. Prima facie, one may think the call made sense, since, as Reuters reported, “Syria’s crackdown on pro-democracy protests” is going to be high on the agenda […]

President Barack Obama said on April 21 that PFC Bradley Manning “broke the law.” Obama: “So people can have philosophical views [about Bradley Manning] but I can’t conduct diplomacy on an open source [basis]. . . .  That’s not how the world works.  And if you’re in the military. . . .  And I […]

We return from a recent trip to the region persuaded that the main question engaging people with respect to the “Arab spring” is no longer “who’s next,” but rather “how far will Saudi Arabia go in pushing a counter-revolutionary agenda” across the Middle East?  Whether Saudi Arabia is really capable of coping with the momentous […]

The Empire admits: without Al-Jazeera, they could not have bombed Libya. How did Al-Jazeera, once dubbed the ‘terror network’ by some and whose staff were martyred by US bombs in Iraq and Afghanistan, end up becoming the media war propagandist for yet another Western war against a small state of the Global South, Libya?  We […]

It is now clear that the no-fly zone has been expanded in Libya to a military campaign for a regime change, something that the UN Security Council did not authorize.  Gaddafi’s residence in Tripoli has been bombed and more strikes are taking place in Tripoli and other towns.  The argument of course is that Gaddafi’s […]

The Tunisian revolution has wiped out the Ben Ali system, and the Egyptian revolution is about to eliminate the Mubarak system after the fall of the president.  No doubt, the epoch of unlimited domination in the Arab world is coming to its end.  After decades of despotic, patronage-based regimes, the Arab peoples seem determined to […]

The politics of plunder imposed by the United States and its NATO allies in the Middle East is in crisis.  This was inevitably unleashed with the high cost of grain, the effects of which are being felt with more force in the Arab nations where, despite their enormous oil resources, the shortage of water, arid […]