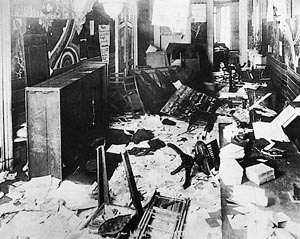 “We Americans owe so much to communist witch-hunts,” declared a tearful President Bush, exhibiting an uncharacteristic degree of feeling. “Without decades of vicious red scares, we could not now detain and torture Muslim terror suspects. From the Palmer Raids to the McCarthy era to the FBI surveillance of Martin Luther King and the Black Panther Party, anticommunism has been there to insure our American way of life.”

It remains unknown why the President chose this particular moment to honor the United States’ unsleeping vigilance toward so-called communists. Some speculate that the commemoration is, in part, an answer to a growing perception that the Bush presidency is foundering and possibly on its last legs.

“Those Capitol Hill war criminals are going down,” objectively stated news correspondent Torchy LaFarge, who had come to tape-record the event for Pacifica Radio. “If public outcry against the Iraq invasion isn’t enough to stop Bush, then how about the Valerie Plame scandal or Hurricane Katrina? All I want is an end to this psychotic administration and the chance to carry Karl Rove’s head around on a pike. Nonviolently, of course.”

Most of the other attendees, however, were inclined to disregard reports of the administration’s imminent demise. “Schadenfreude, all is schadenfreude,” observed Clyde Lichtenloafer, President of the local chapter of the Log Noggin Club, an organization for gay Republicans. “Progressives these days are happy that things are falling apart. But look around. Who are they going to vote for? There is no candidate, no party, no ideal, and no serious plan to put in this government’s place. Furthermore, no one is able to envision a viable alternative. I, myself, would like the luxury of imagining a better world, but I can’t. The terrorists will get me if I do.”

This perspective appears to correspond with that of the Bush administration, which seems confident that the “revolution” will not be televised, since it will never happen.

“Our nation is safe because, for decades, American citizens have quietly internalized the fear of being called subversives,” continued Mr. Bush, with unusual mental acuity. “Bad as our current health care is, no reasonable person demands socialized medicine. Bad as our troops getting killed in Iraq is, no reasonable person demands an end to the economic system that sent them there in the first place. That’s because, deep down in their minds where they don’t know it, good Americans realize that any peaceful, egalitarian solution will, sooner or later, be labeled communist. Anticommunism is the number one, primero, numero uno reason why there won’t be any real change in America’s great status quo.”

Turning his attention to the anonymous humanoid buried under six feet of rich American soil, Mr. Bush elaborated: “Here lies someone whose name we shall never know. Some ordinary citizen who might have given up a good night’s sleep in order to phone J. Edgar Hoover and tell him that their kid’s teacher was a dirty communist. Maybe this person injured their fists beating the tar out of some ‘commie fag’ in the park. Maybe they threw rocks at Paul Robeson at Peekskill or hung around public schools to taunt communist children on the playground. This person did not want to own the means of production. This person never voted for public gardens, better schools, or social security. Why? Because, no matter how personally unhappy they were, this person could not envision a better way of life. We thank this unknown person for his or her unhappiness, an unhappiness that has atrophied the spirit and imagination of every American of every political stripe.” [Complete text, p. 14¾]

As a West Point Cadet lit the Eternal Flame over the gravesite, the masses observed a moment of silence.

“It’s true,” whispered Dennis Moronovitch, leader of the Revolutionary Bolshevik Vanguard and pre-med student at Columbia University. “I mean, the entire Bush family are parasites. They should all be taken down to the cellar and shot, just like Lenin did to the Czar’s family in 1918. But, like Marx said, history repeats itself — so why bother? The women would once again sew their diamonds and jewels into their corsets. Our bullets would glance off them and ricochet around the room, probably putting somebody’s eye out. Then we’d establish a dictatorship having nothing to do with real communism, and purge millions of innocent people. I’m going back to my dorm and take a nap.”

Returning to his usual, jocular self, President Bush closed his address by announcing that this Thursday, the Houston Astros will be given another crack at the World Series, playing Chicago Cub Scout Troop 487 at Arlington Cemetery, where the Tomb of the Unknown Red-Baiter will be used as third base. “Let’s all slide home!” exclaimed an optimistic Mr. Bush, blowing his umpire’s whistle.