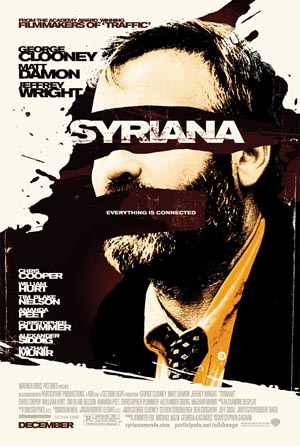 That some reviewers gave Syriana a poor rating is a direct consequence of the journalistic practice of delegating film reviews to uninformed writers.  (The worst example comes from William Arnold of the Seattle Post-Intelligencer: “[I]t’s simply not a very good movie. Its story line is populated with so many characters and meaningless names that it’s nearly impossible to follow.”  I leave you to interpret what he means by “meaningless names.”)  The film, written and directed by Stephen Gaghan (based on Robert Baer‘s book, See No Evil), reflects the complexity of oil imperialism and Middle East politics, and it is worth the effort needed to untangle its message.

A full appreciation of Syriana depends on the prior knowledge of the viewer.  To anyone who has read Confessions of an Economic Hit Man by John Perkins, or House of Bush, House of Saud by Craig Unger, the plot of the film, which might appear as wild conspiracy theory to the untutored, rings alarmingly true — U.S. machinations in the Middle Eastern oil patch have dire implications for the entire world.

The viewer equipped with the information in these two books will appreciate that the plot, characters, and setting of Syriana are fully grounded in the real world. The characters of the movie are reminiscent of the main actors in oil imperialism and Middle East politics identified by Unger; while Perkins’s history of the building of modern Saudi Arabia accounts for the clusters of high-rise buildings and boulevards to nowhere that stand out so starkly in the middle of the desert in the movie.

Syriana is a demanding and important film that highlights the fact that a solid political education is a prerequisite for understanding critical world events and the art inspired by them.  The insipid reviews that panned the film reveal the perils of apolitical commentary.