In the late seventies, I joined the Peace Corps, fresh out of college with a degree in Plant and Soil Science.  Maybe I did it for for idealism, maybe for a youthful sense of altruism or adventure, maybe to escape a future of employment at Cargill or Monsanto, or all of these.  Whatever the reason, I did it in the belief that the Peace Corps was different.  It was separate from the recently ended war in Viet Nam.  It was not Hoover’s FBI or the CIA.  It was the Peace Corps.

I was sent to the beautiful country of Ecuador where I underwent eleven weeks of language training and “orientation.”  We learned about the three goals of the Peace Corps.  The CIA problem was addressed extensively, and we were taught many ways to say in Spanish that the Peace Corps is not a part of the CIA.  We were taught to say that the Peace Corps was “un programa de intercambio,” an exchange program, as far as I could make out, between Ecuador and the United States.  This didn’t seem quite right, but with so much going on in such a short a time, I didn’t challenge it.

We were told not to go near universities.  We were told that there was a great deal of anti-US sentiment there and that it would be very dangerous for us, so we were to stay away.  At least, this was believable.  Everybody hated the USA for the Vietnam War.

We were not to participate in any political activities.  Period.

We were instructed that nothing happens very fast in Latin America.  We should not expect actual results.  It was different here.  Things moved slowly.

We were also not to go barefoot, not to eat street food, to boil everything, to peel or soak vegetables in an iodine solution, and to inspect our stools for signs of life.  We were taught to take our malaria medication and shown what to do in case of an animal bite, too.

Once we passed the language test, we were sent off to our job assignments.  I was to report to an agricultural research entity in the province of Manabí on the Pacific coast.  Somehow, I found my way, and reported for duty.

The two men in the tiny office stared at me as if I had been dropped by a flying saucer at their door.  I explained that I was sent by the Cuerpo de Paz.  They looked at each other,  they looked at me, and at each other again.  It was clear that they had no idea that I was coming.  They were perplexed, and I felt like an idiot.

I called my Program Manager to tell him that there was no job.  He told me not to worry, things happen slowly in Ecuador, to go to my village and volunteer in the school or something.

So,  that’s what I did.  I volunteered in the school to do a community garden.  It looked so easy.  Sun, water, mulch.  I wondered why we were sent so far to do so little.   This is when I met Señor Orteaga.  My students were digging away,  and Sr. Orteaga walked up to me and asked me: who am I?  What do I think I am doing?

I was planting tomatoes, in what appeared to me to be tomato heaven.  My students were trusting and enthusiastic. 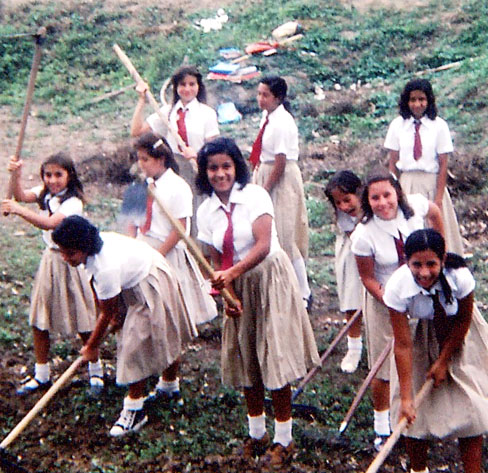 Sr. Orteaga watched every move I made and criticized me at every opportunity.  When a tomato grew a spot or blight, he called on me to identify the disease and to name the cure.  He stood by triumphantly as the wet season drew into dry, and all my efforts, and those of my poor girls, turned to dust.

Could not the Peace Corps orientation have mentioned that there are wet and dry seasons to those of us assigned to agriculture on the coast?  It would have been so helpful.

Sr. Orteaga dogged me incessantly.  He told me that his community needed a tractor and cement, not some silly gringa.  He hounded me. He followed me.  He hated me.

In desperation I fell back on the words that I was taught during orientation.  I said that the Peace Corps was “un programa de intercambio.”  Before I even finished that mouthful, I knew that I was dead.  Sr. Orteaga’s face contorted, then he exploded: Exchange Program!  Do you mean to tell me that I can go to the US and go to any town I want?  Can Ecuadorians go to the US and teach Spanish?  Can we do whatever it is you are doing?  What kind of exchange is this?  Are there visas for us in exchange?  Where are they?   How do I get my Peace Corps Exchange visa?  Can I make a garden in your town?

I hated him, too.

When a rare opening occurred in the capital city, Quito, I jumped at the opportunity.  I was placed in a job that was essentially a lab job.  It required no special skill or training.  Once again I wondered why we were sent so far to do so little, but this time I was so glad to be free of Sr. Orteaga that I didn’t care.

An Ecuadorian friend invited me to a university to see a film from Cuba, “The New School.”  I gladly accepted.  After the film, the enthusiasm was so great that everybody just grabbed me and invited me to coffee and wanted to hear what I thought and wanted to tell me what they thought.  Far from being threatened, I made many friends.

Much later, I told my friends about Sr. Orteaga.  I told them about how mean he was to me, how he ridiculed me, how he found fault with every move I made, how he hounded me.  After a pause, one friend answered, “Well, I would have to congratulate him on his anti-imperialism.”

What was the point of the Peace Corps?  Was it a CIA front after all?   While I was wondering about this, Texaco was busily looting and polluting the Amazon rainforest in the Oriente province.  US Marines were training and plans for new military bases were already in the works.  Further unpayable debts were being encouraged for programs that would make a few people rich and ensure the poverty of the rest.

To this day, I run into people of a progressive leaning who have a favorable view of the Peace Corps and think that it represents the benevolent, generous side of American society.  It does not.  Young people who join it indeed may be generous and benevolent (as well as clueless as I once was),  but the Peace Corps as an organization is at bottom one more weapon in the arsenal of imperial domination.  Like the military, the Peace Corps has a specific role to play.  It is the PR front man, the warm-up act for the real show, the good cop, playing in tandem with the bad cop.  Yet even at this, as my experience demonstrates, it does a poor job.  It is sloppy and haphazard and ineffective.

John Perkins, the author of Confessions of an Economic Hit Man, says that he was recruited out of the Peace Corps.  That may be another function of the Peace Corps, serving as a proving ground for the next generation of CIA agents, career diplomats, and international corporate goons. If I ever saw Sr. Orteaga again, I too would have to congratulate him on his anti-imperialism.

The Peace Corps is still active in 71 countries. It’s even back in Bolivia, from which it was booted out in 1971 due to the widespread belief that it was involved in a project to eradicate the indigenous population through sterilization without consent.1  Far more politically significant today than the Peace Corps, however, are the so-called NGOs: Non-Governmental Organizations (a misleading term, in so far as their funding comes either from government or forgone taxes that go to philanthropic giving). James Petras points out that the NGOs, the same old wine in a new cup, have nevertheless attracted many former leaders of guerrilla, labor, and social movements, giving the organizations credibility on the left that the Peace Corps could never hope to achieve, playing the good cop more convincingly than the Peace Corps and clearing the path for the bad cop of neo-liberal economics.2

As Evo Morales and Álvaro Garcia Linera prepare for an inauguration escorted by miners instead of soldiers, and the hopes for the future of Bolivia are at a high point, both the Peace Corps and the NGOs should be seen for what they are.

1   The Peace Corps returned to Bolivia in 1990.  For Bolivians’ reaction to imperialism, including the use of sterilization, see Yawar Mallku [Blood of the Condor] (Dir. Jorge Sanjinés, 1969).  Consult Leonardo García-Pabón, “The Clandestine Nation:
Indigenism and National Subjects
of Bolivia in the Films of Jorge Sanjinés” (trans. Maura Furfey), Jump Cut
44 (Fall 2001) for discussion of Yawar Mallku as well as other works by Sanjinés.

Nancy Wallace is an alternate steward in Local 97 of the IBEW-AFL-CIO.