Things seem to keep going from bad to worse for workers at Northwest Airlines (NWA).  While striking mechanics and cleaners face a bitter winter after more than four months on the picket line, pilots, flight attendants, gate/ramp agents, baggage handlers, customer service reps, and other union workers face a fresh round of givebacks against the backdrop of a bankruptcy court.

“It’s like working at a morgue,” says Mike Ramsdell, an IAM member in Cincinnati.  “The official proposal was to outsource 98 stations to subcontractors.  Our station isn’t even on the list — which makes me think that our station will be cut entirely.  All the small places are pretty much toast.”

NWA pilots are looking at even steeper pay cuts (23.9 percent), as are flight attendants with 20.7 percent.

But in a break from routine in this ailing industry, two small but growing campaigns — led by airline workers — are using NWA’s strike and bankruptcy debacle as a springboard for what may be the opening moves of an industrywide fightback.

Galvanized by the mechanics’ strike at NWA, members of other NWA workgroups (flight attendants and ground workers), union members at other airlines (United and American), and other labor activists have created a new industry-focused organization: Airline Workers United (AWU).

“The way that the mechanics were hung out to dry has really hit many of us hard,” said Rebecca Johnson, a customer service rep and IAM Local 1833 member at Northwest Airlines.  “I hope that not too many employees look at what has happened during the mechanic strike and lose heart.  I hope that when they look back they see the problem was in the lack of solidarity and support from fellow unions on the property, not that employees don’t have a voice or are incapable of promoting a strong fight.”

Twenty-seven activists created AWU’s organizing committee in November to build support for an effort to unite workers from different unions, workgroups, and employers.

“Part of the reason for the effectiveness of the airlines’ divide-and-conquer strategy is the serious lack of communication and planned strategies amongst many unions — even at the same company,” said Richard Turk, Communication Officer for Airline Mechanics Fraternal Association (AMFA) Local 9.  “The coming together of activists from throughout the industry can be a large step in the right direction.”

Explaining why she joined the organizing committee, Karen Schultz, national contract action team coordinator for NWA’s flight attendants union (PFAA), said that she was interested in a “global strategy that goes beyond the boundaries of individual unions and trades.”

Beyond building unity, the group hopes to build “rank-and-file networks to make unions democratic and keep leaders accountable.”  Frustrated by the sluggish and short-sighted responses of many union leaders to their industry’s crisis, AWU members — many of them local officers or former officers themselves — see this step as necessary to recovering union losses since the industry’s post-9/11 collapse.

Spread out across the country, the group has been meeting weekly by phone, has set up its own listserve, and is designing an AWU website.  Plans are also being made for regional meetings and a national half-day conference as part of the May 2006 Labor Notes conference.

“At the meetings, we can talk about how to perpetually organize and the value of continually setting resources aside to do this,” says Schultz.  “And we absolutely must leave with a plan for specific actions.”

“We are a little NWA-centered right now,” added Ramsdell, who helped to found AWU.  “We need to expand our scope and reach out to non-union people too.  We are going to need to find a way to reach the people that have given up.  At Delta [a mostly non-union carrier] it is defeat after defeat and workers don’t want to fight.”

AMFA strikers at NWA faced an offer that AMFA leadership called “the worst contract in the history of airline labor.”  Under pressure from members, however, the union’s National Executive Council put the offer to a membership vote.  Members rejected the offer, which would effectively lay off the entire striking workforce at the airline, by 57 percent on December 30.

News of the offer — and the rejection — surprised strikers and supporters alike, as the union had escalated support efforts for the strike only weeks before.  In November, AMFA launched the Campaign to Save Airline Jobs and Safety, with rallies in the Minneapolis and Detroit areas, two major centers of the strike.

The campaign’s opening rally in Bloomington, Minnesota on November 19 drew 700 and followed NWA’s deadline threat to force concessions through the bankruptcy court on November 16.  A crowd of 400 came out for the second rally in Southgate, Michigan on December 4.

Speakers at both rallies repeatedly emphasized themes broader than the NWA strike: companies’ use of bankruptcy as a “strategy of choice” to bust unions (drawing connections between auto and steel companies and airlines); the outsourcing of aircraft maintenance overseas; the need for international solidarity between unions; and the general decline in airline safety standards.

UAW President Ron Gettelfinger — while studiously avoiding mention of his own union’s woes at Delphi — spoke of his union’s support for the strike, saying, “it is courageous for workers to go on strike in the climate that exists today.”

The campaign is the brainchild of veteran labor consultant Ray Rogers.  His group, Corporate Campaign, was hired by AMFA in October.  Rogers says that the campaign’s strategy entails viewing the strike not as AMFA’s final move against NWA, but as “one piece of an overall campaign of leverage.”

The other pieces of the campaign center around pressuring and exposing NWA’s board of directors and the bankruptcy court.  Former Michigan Governor John Engler — a NWA board member and president of the National Association of Manufacturers — and NWA CEO Doug Steenland have become particular targets. 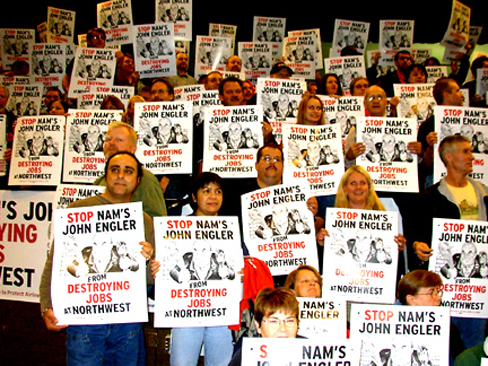 AMFA Local 5 has planned a number of Detroit actions at places linked to both Engler and Steenland.  A threatened picket of the Superbowl (Steenland sits on the regional hosting committee) has drawn considerable local media attention.

Jen Biddle has worked for 10 years as an aircraft mechanic and has written extensively on airline unions.  Chris Kutalik works as co-editor of Labor Notes.  For more information on both campaigns see www.labornotes.org and www.corporatecampaign.org/airlinecamp.htm. AWU can be contacted at <airlineworkers@gmail.com>.