The last word has been spoken, the demolition crews began moving their equipment up even before the delegates to the Bundestag voted on 19 January 2006 by a 431 to 120 majority to tear down the Palace of the Republic in central Berlin.  The ruling parties, Christian Democrats and Social Democrats, as well as the right-wing Free Democrats, joined in the vote; with few exceptions, only the Left Party and the Greens voted Nay. 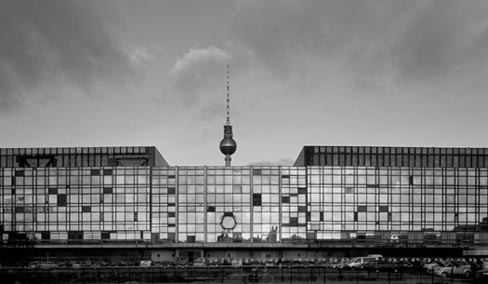 Although the big structure, shut down in 1990 because of asbestos used in the steel frame, was gutted, neglected, and rundown, countless emotions were involved in a move which can only increase the still strong mental barriers between easterners and westerners in Germany.  And despite constant criticisms of the building’s architecture, few deny the political nature of the decision.

The old palace once situated on its site, the residence of Prussia’s kings and kaisers, was heavily damaged during the war.  Instead of rebuilding it, the very young government of the German Democratic Republic had it torn down in 1950.  There is little doubt that anti-royalist views were in play and Prussian relics were not valued highly at that time: indeed, the four victorious powers had outlawed Prussia as a political entity in 1945. 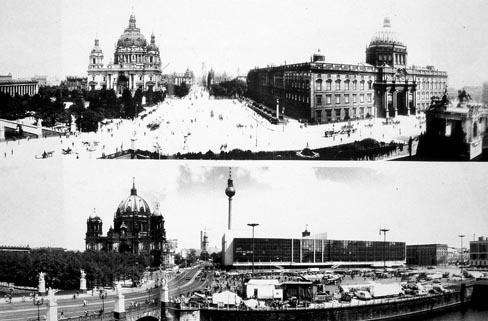 Some groups in the campaign to remove the Palace of the Republic recalled the alleged beauty of the old Prussian palace (Schloss), demanded it be rebuilt, and even set up a full-size plastic replica to show what it would look like.  Some were certainly nostalgic old monarchists, the kind who still attend ornate ceremonies honoring members of the Prussian clan, both dead ones (like Frederick the Great) and living ones, who still treasure archaic titles.  They waved aside analyses showing that rebuilding even the facade might cost billions in a very bankrupt Berlin.

But the main motivation for the decision was to remove a symbol of the GDR, centrally situated on a key site at the end of Berlin’s traditional promenade, Unter den Linden.

The Palace of the Republic, opened in 1976, did indeed house the Chamber of the People (Volkskammer), the largely rubber-stamp parliament of the GDR which, after open elections, voted for German unification just before being shut down.  But two thirds of the long, low building had been used and enjoyed by the people of East Berlin.

A recent, lengthy article in the New York Times mentions in unexpectedly glowing terms the “concert hall that was one of the most technologically advanced of its day; its seating could be mechanically configured to suit different events.”  In other words, most seats could be removed for dancing at a big ball or put back, so that thousands could either attend a party congress or enjoy a concert with Miriam Makeba, Pete Seeger, or other singers and musicians from around the world.

There were several handsome cafes and restaurants at reasonable prices, a bowling alley, a disco for young people, several small theaters, a large post office and, most prominently, a “dazzling public lobby . . . once considered the center of social life in East Berlin,” as the Times author writes.  Indeed, with its large paintings by the GDR’s leading artists, the many lamps and countless comfortable sofas and armchairs, it was a favored spot, free of charge, to escape bad weather, rest up from a visit downtown, or meet friends and Berlin visitors.

The West German press was almost unanimous in denigrating the building.  But the Times writer, Nicolai Ouroussoff, speaks of “less dogmatic architectural activists . . . who refuse to see the Palace in purely ideological terms . . . they have cited elements of the building’s beauty that many Germans – conditioned by decades of Cold War oratory – find difficult to see.”  Their calls to save the building, the Times adds, was a “revolt against historical censorship” and Ouroussoff states that “the more quickly you shed your prejudices, the better the building looks as a work of architecture.”

But, undeniably, it was a symbol of the GDR.  German reunification — or, as many disappointed East Germans call it, annexation — led to the destruction of nearly every trace of the old system.  A first step was the seizure of TV and radio stations and all but a tiny fraction of the print media, followed by shutting down the great majority of factories, taking over or closing most institutions, and privatizing farm collectives.  A lasting 20 percent jobless rate was the result.

The process was not so simple with buildings.  Tax breaks, subsidies, credits, and unlimited access to materials and pools of craftsmen, often from eastern Europe, permitted the renovation of countless homes and house facades, and this was certainly a blessing, although it often involved a six-, seven- or eightfold increase in rents.  The new city and state governments were happy to take over the beautiful opera houses built in GDR years in Dresden and Leipzig, the new Gewandhaus concert hall in Leipzig, the rebuilt Schauspielhaus in Berlin, the restored Zwinger Palace in Dresden and Frederick’s Sanssouci and Winter Palaces in Potsdam, to name a few.  But obvious GDR symbols were taboo.  The building which housed the Central Committee of the GDR’s Socialist Unity Party was hidden behind a new extension and became Germany’s Foreign Ministry.  The former center of the World Federation of Democratic Women was replaced by an auto salon.  The State Council building, Erich Honecker’s official office, with a balcony salvaged from the old Schloss — from which Karl Liebknecht declared a short-lived Socialist German Republic on November 9, 1918 — has been turned over to a private management school for young capitalists.  And, next door to it, the Palace of the Republic is now doomed.

East Berliners comment wryly that anything recalling the old GDR gets covered up or torn down; only the nearby TV tower will probably be spared; at over 1200 ft. it is too big to get rid of (plans to surround it with giant skyscrapers had to be dropped due to lack of public finances or private investors).

In recent years, ironically, the Palace of the Republic, although only an empty shell with a steel construction framework, was rediscovered for temporary uses and exhibits, including the Chinese terra cotta soldiers, a “philosophical mountain-climbing” installation, and even a business convention.  Despite its bareness, the users were enthusiastic about possibilities of saving and reconstructing this very practical building.  Their views were ignored.

Original plans to rebuild the old royal palace faded when it was realized that this was not only exorbitantly expensive but also totally useless, for it would be unsuited to any modern use.  The plans were altered: some old sections and stone ornaments from the Kaiser’s palace would be used to reproduce at least the old facade.  Plans for the interior varied from a private hotel and parking building to a combination of museum exhibits and libraries; nothing is certain except that at least one and a half billion euros will be required, construction can not begin until 2007, with completion 2012 at the earliest. 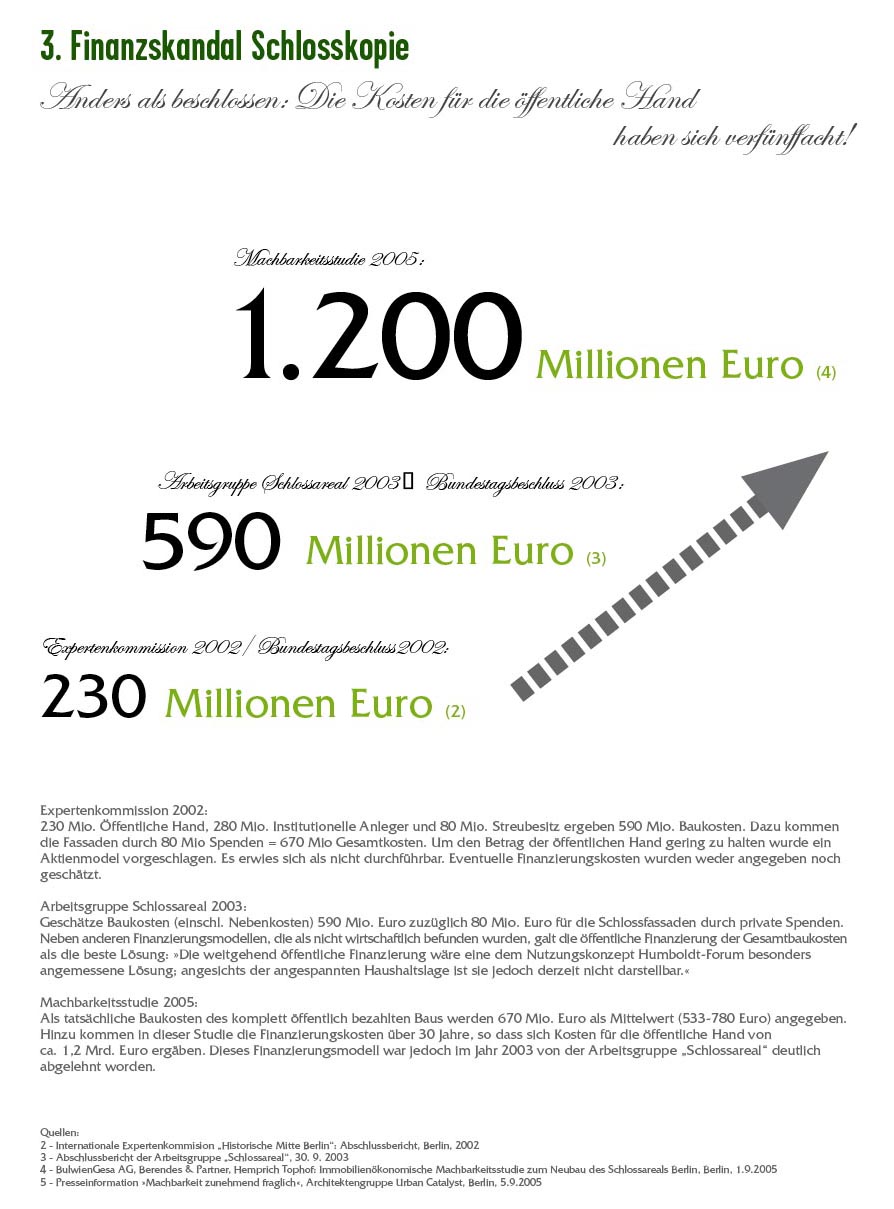 Private investments will be necessary but nothing is clear about the investors’ intent.  The only thing definite seems to be that for a very long time the empty space will be covered by lawns.  Perhaps some day some building will recall the old Schloss, but as Ouroussoff stated: “the government’s support for a kitschy castle should be viewed as the worst kind of architectural crime: an act of cultural parricide that rules out the possibility of redemption.”

Some bitter East Berliners make a dire prediction.  Since the building was set on an ingenious foundation to spite the marshy grounds next to the Spree River, they suggested that its removal and subsequent shifting of ground pressures might cause big cracks in the huge Protestant cathedral across the street, built around 1900 (very atrociously, many architects believe) for the Kaiser and his family and housing the remains of most of the Hohenzollern royalty who once ruled Prussia and then all Germany.  The cathedral, like the giant Olympic Stadium built in Nazi style in 1936, has been carefully restored.