Let me begin by getting the boilerplate that appears in every review of a movie by Lars von Trier out of the way: a) Lars von Trier is a provocateur whose films may very well be mere exercises in cynicism; b) Lars von Trier dares to make films about America without ever having visited the country; and c) Lars von Trier does not like to fly.

As for me personally: I do not care a whit about von Trier’s travel itineraries (past, present, or future).  I care even less about his preferred modes of transportation.  Lastly, provocation was the stock in trade of some of the most notable and accomplished filmmakers of the twentieth century, e.g., Billy Wilder, Joseph L. Mankiewicz, and Blake Edwards (to name just three of the greatest practitioners of provocation the cinema has known).

What I do care about are movies (as does von Trier), and Manderlay is one of the best movies currently playing (albeit in limited release.  Over the next two months the film is scheduled to play in only 3/5’s of the 50 states — and in more than half of those at only one theater.  I guess provocation is a dangerous thing in America circa 2006.).  In his new film von Trier confronts America’s peculiar institution — chattel slavery — and its continuing repercussions in American society.  Although he may not travel to the United States, von Trier is willing to grapple with its past and present in ways alien to a majority of its native-born artists.

Manderlay is the second installment in a trilogy von Trier began with Dogville (2003).  In Dogville, Grace was a gangster’s runaway daughter (echoing the heiress who runs away in Frank Capra’s It Happened One Night [1934]) who ends up being enslaved by the townsfolk who originally saved her.  When she is rescued by her father at last, she has his henchmen machine-gun the town and the residents, exacting revenge for her slavery.

For its part, Manderlay‘s title and first scene bring to mind one of the most famous beginnings in all of literature:

Last night I dreamt I went to Manderley again.  It seemed to me I stood by the iron gate leading to the drive and for a while I could not enter, for the way was barred to me.

The source is Daphne du Maurier‘s 1938 gothic romance Rebecca (adapted for the screen by Alfred Hitchcock in 1940).  Like du Maurier, von Trier has crafted a gothic romance, but instead of the English coast, his tale is set in the Deep South, making Manderlay a Southern gothic where romance often entails miscegenation and ghosts emanate from a racist past that is ever present. 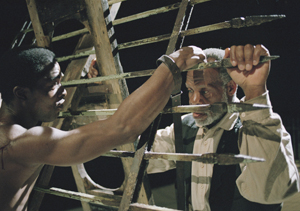 At the start of the film, Grace and her father have made their way from the Rocky Mountain hamlet of Dogville to Alabama and stopped for a picnic in front of an iron gate surrounding a plantation — Manderlay.  As they are about to drive off, a black woman knocks on the window of Grace’s car and implores her help.  Grace goes with her through a hole in the fence and is confronted with what at first glance seems to be a scene out of the past: a black man stripped to the waist and tied to the missing piece of iron fence, awaiting a whipping for some transgression.  Grace stops the whipping (with the help of her father’s gangsters) and learns that at Manderlay life is lived as if slavery had not been abolished 70 years previously.

Feeling that she has stumbled onto an injustice that must be righted (and maybe still hurting from her own experience of enslavement in Dogville), Grace decides to remain at Manderlay and oversee its transition from slave life.  Dubious about her chances for success, Grace’s father drives off, leaving her four gangsters and a lawyer. 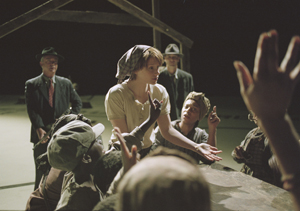 The rest of the film chronicles Grace’s attempts to change the culture of Manderlay and insure that its first harvest under a new system is successful.  This being a film by Lars von Trier, things do not run true to Grace’s plans, and the narrative has an abundance of reversals and surprises in store for our do-gooding heroine.  To say more would ruin the intense pleasure of watching the story unfold, so I shall lapse into silence with regard to this aspect of the film.

But if I am forced to be quiet about Manderlay‘s plot, I do want to comment on the cast changes from Dogville to this film.  Originally, the roles of Grace and her father were played by Nicole Kidman and James Caan.  They are filled here by Bryce Dallas Howard and Willem Dafoe.  Von Trier handles this switch with ease.  Dogville was the story of a haughty woman brought low by people from a social stratum beneath hers.  Kidman’s weathering of her humiliations was terrific: a Hollywood star allowed her golden screen image to be tarnished, thereby providing the film with an added a layer of meaning and irony.  In Manderlay, Grace is a young innocent seeking to bring justice and equality to a place that seems to be stuck in time, just as Howard is a young and aspiring actor who hopes to succeed in a difficult role in only her third film.  In both works, von Trier molds the role of Grace to the strengths and personae of his lead actor so that each performance feels organic to its particular film.

While von Trier may have changed his leading lady, he has retained his method of representing America: a

soundstage where locations are often only lines on the floor, and props and sets are minimal.  Von Trier has taken the notion of the “national stage” literally and rendered America as a place where a variety of performances are played out as people struggle to survive (and maybe even prosper).  He has also kept his trademark approach to imagery: rough and jagged handheld camerawork joined together by jump cuts with the occasional lyrical image finding its way into the proceedings.  The biggest difference I noted was the darker, more rough-hewn

quality of the images in Manderlay — a change appropriate to the bleak and unresolved nature of the film’s subject: American racism and its continuing discontents.

Lastly, von Trier again uses David Bowie’s Young Americans to accompany the closing credits.  But he replaces Dogville’s montage of images chronicling poverty in America with photographs recording the history of racial struggle and strife from the post-Civil War period up until the present day.  Watch and listen closely, and

you will be astonished by the extraordinary artistry von Trier employs in matching image to lyric.  Over the brief span of Bowie’s song, von Trier creates a masterpiece in miniature depicting the “worse of two evils” (you will understand what I mean after you have seen the movie).

This director from Denmark who will not get on a plane and has never visited the United States has made one of the most acute and disturbing movies about race in America that I have ever seen.  Although I have no idea if it would do any good, all I can suggest is that more filmmakers begin to abjure from flight.

Brian Dauth is a queer essayist and playwright living in Brooklyn with his husband Terrance.  His work has appeared in Senses of Cinema (on the careeer of Jsoeph L. Mankiewicz) and The November 3rd Club (on Brokeback Mountain and The Reception).