Of all the types and genres of film that exist, the rarest of all may be the autumnal masterpiece.  What explains the infrequent sightings of this cinematic marvel?  It is not that filmmakers somehow lose their talent at a particular age, but rather that, the industry being a slave of fashion, they lose the ability to attract the funding needed to make films (of whatever quality) in the first place.  Additionally, there is the question of the physical energy needed to make a motion picture: Billy Wilder once quipped that it was not a director’s mind but his legs that gave out first.

Fortunately for serious moviegoers, both the mind and the legs of Sidney Lumet are in terrific shape as evidenced by Find Me Guilty, his first new feature film in seven years.  In telling the story of the longest criminal trial in United States history, Lumet once again fashions a fable for our times.  Find Me Guilty also allows Lumet to return to the courtroom drama, a genre whose mastery he demonstrated in his first film 12 Angry Men (1957) and subsequent works such as The Verdict (1982) and Night Falls on Manhattan (1997). 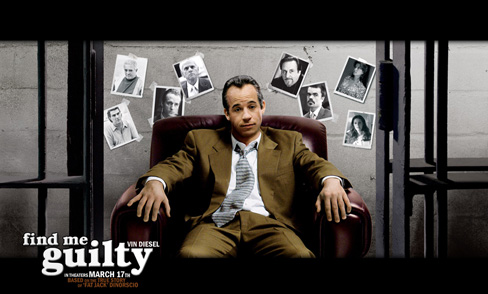 Find Me Guilty is about the federal racketeering trial of twenty alleged New Jersey members of the Lucchese crime family.  The film focuses on one of the defendants, Jackie DiNorscio (Vin Diesel), who decides to represent himself and tells the jury in his opening statement that he is a gagster and not a gangster.  Since the film’s plot is based on a true story (with most of the dialogue taken from the trial transcript), the deep pleasures of the film do not reside in finding out whether or not Jackie and his pals are convicted (after a nearly two-year trial, all defendants were acquitted on all counts after the jury deliberated for only fourteen hours).  Lumet’s accomplishment is to use the film to investigate the concepts of truth and justice as they are put to work in present-day America.  As always, Lumet asks uncomfortable questions and receives uncomfortable, even contradictory responses.

The Search for Truth

A trial is most often depicted as a vigorous and probing search for the truth in a courtroom, a place of impartiality where no one side is privileged over another.  Lumet seeks to show us otherwise.  For him, a trial is a contest between competing narratives, whose winner is the fellow who tells the story that resonates most deeply with the jury (whether or not it is the one closest to reality).  In such a system, truth depends as much on the appeal of the storyteller as it does on objective facts.  And in Jackie DiNorscio, Lumet has found a most appealing raconteur.

As I watched the film, I could not help but think about the stories Americans were told about the necessity of invading Iraq, which featured terrorists and weapons of mass destruction more fancifully than a Hollywood blockbuster would.  What role did the appeal of the men and women who told these stories play in getting a majority of Americans to believe what turned out to be lies?  Have we as a nation — as Lumet seems to indicate — reached the point where the attractiveness of the teller combined with the sincerity of his style is more important than fundamental questions of truth and falsity?

Lumet does not hide from the audience the fact that Jackie has committed crimes.  When cross-examining one witness, Jackie asks him to tell the jury about their escapades together, noting that if he were to do so it would appear that he was boasting.  Lumet, however, does refrain from telling his viewers what they should think about this situation.  For most of the film (shot on digital video, another step in the advancement of this medium), Lumet relies on long and medium shots, holding the camera back and allowing the audience to witness the interplay among the various forces at work in the courtroom.  Lumet refuses to provide viewers with the customary signposts lesser directors use to signal whose side viewers should be on.  Lumet treats his audience as adults who are smart enough to work things out for themselves.

The one time Lumet does allow himself an extended series of close-ups is at the climax of the trial when Jackie cross-examines the prosecution’s star witness, his cousin Tony Compagna (Raúl Esparza) who had tried to kill him in the opening sequence of the movie.  Intercutting intense close-ups of Jackie, Tony, and the judge, Lumet bores in on the question of truth.  Jackie is able to call Tony’s veracity into question not on the basis of what he says, but by attacking the manner in which he says it.  In this moment, truth is shown to rest not on an objective fact, but on how it is communicated.  Performance is all.

The Wheels of Justice

Were Find Me Guilty merely Sidney Lumet’s belated leap onto the postmodern bandwagon, it might be a notable film, but not necessarily a great one.  But Lumet is also interested in the process of justice, and he depicts a justice system that wants to win at any cost.  The prosecutor Sean Kierney (Linus Roache doing a male version of Faye Dunaway’s character in Network) will do whatever it takes to ensure convictions, including arranging for a jailhouse beating of Jackie the night before Tony Campagna is to testify.  For his part, the judge orders that one of the defendants (who has suffered a heart attack) be brought to court on a gurney so that the trial may continue.  In long shot, Lumet shows the difficulty of getting a hospital bed into a courtroom not designed to accommodate it.  Only through the efforts of the other defendants (who lift the bed into the air and carry into the courtroom) can this defendant attend and a mistrial be avoided.  If the prosecution wants to win at all costs, the judge takes a similar attitude to ensuring that the trial continues.  Once again in a Sidney Lumet film, the audience is presented with a system determined to keep itself going, no matter how much the effort to do so causes it to deviate from its stated mission.

Lumet’s refusal to supply answers to all the questions he raises in his film has not sat well with several critics.  In the most hysterical response so far, Kirk Honeycutt in The Hollywood Reporter writes that “Sidney Lumet’s first film in over six years wants to turn all moral values topsy-turvy.”  As far as I can tell, Lumet attempts nothing of the kind.  He is merely doing what he has done throughout his career: looking at American society and its institutions with a clear and steady eye and reporting on what he sees.  If moral values are topsy-turvy in Find Me Guilty, that is because they are in the society that the film dissects.

When he accepted an honorary Academy Award last year for lifetime achievement, Lumet said he wanted to thank the movies.  It would be equally appropriate for the movies — as well as moviegoers — to thank him right back for fifty years of intelligent and honest cinema.

Brian Dauth is a queer essayist and playwright living in Brooklyn with his husband Terrance.  His work has appeared in Senses of Cinema (on the careeer of Jsoeph L. Mankiewicz), The November 3rd Club (on Brokeback Mountain and The Reception), and MRZine (on Manderlay).