After more than twenty years in the film industry, Joseph L. Mankiewicz was at the top of his profession in 1950.   He had won two Oscars in March for writing and directing A Letter to Three Wives (1949) and had completed filming All About Eve (1950) which would be released in October and go on to garner 14 Academy Award nominations, a record that has been tied (once), but never bested.

Mankiewicz was also one of the leading players in a major Hollywood controversy.  As President of the Screen Directors Guild, he opposed a mandatory loyalty oath for Guild members.  While he was on vacation in Europe following production on Eve, a faction of the Guild’s board led by Cecil B. DeMille tried to stage a coup and have Mankiewicz recalled from office.  The ensuing confrontation was pure Hollywood: emissaries dispatched on motorbikes to obtain the signatures necessary to recall Mankiewicz; doctored membership lists; an office locked on a normal business day; a secret ballot falling into the wrong hands.  And then there was the meeting itself: Mankiewicz orating for an hour and DeMille arranging to be lit by a baby-pink spotlight during his own presentation to the membership.  In the end, Mankiewicz and his supporters were victorious, and DeMille and his faction were forced to resign from the board.  These events helped inspire Mankiewicz’s next film People Will Talk (1951) — one of the first Hollywood films to take on McCarthyism — and played a significant role in Mankiewicz deciding to leave Hollywood the next year.

What is often forgotten is that during this tumultuous time, Mankiewicz also released No Way Out (1950), a movie that deals with race and racism in ways never before seen in a Hollywood film.  The head of production at Mankiewicz’s studio, Darryl F. Zanuck liked to make movies centered on social problems of the day.  He had already produced Gentleman’s Agreement (1947) (anti-Semitism), The Snake Pit (1948) (mental illness), and Pinky (1949) (racial passing).  Mankiewicz’s movie was the latest production in this vein.

What distinguishes No Way Out from these and other films in the genre is the complex vision Mankiewicz brings to the screen.  Richard Widmark plays Ray Biddle, a racist out to avenge the death of his brother who he believes was murdered by Luther Brooks, the black doctor treating him (Sidney Poitier in his screen debut).  Making no concessions to audience sensibilities, Mankiewicz has Biddle let loose with every racial epithet in the book from his first moment on screen.  I am not sure that a filmmaker today would even attempt what Mankiewicz dared to do 56 years ago. 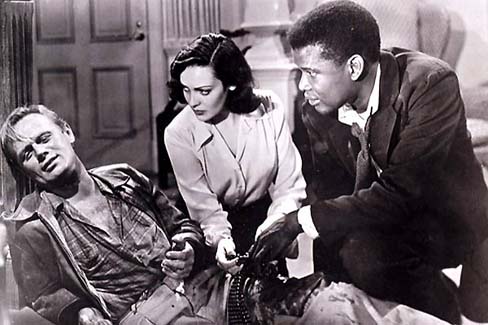 Mankiewicz also complicates the portrayals of his black characters.  Luther Brooks is not the plaster saint Poitier was often required to play, but a conflicted man, full of insecurity, compassion, and anger.  For her part, Luther’s mother is not simply a kindly Black-Mama-on-a-Couch figure, but a woman who wants to see her son leave the hospital and earn more money by joining the successful practice of a local black doctor.  When her other son (Ossie Davis in his screen debut) prepares to take part in the race riot that is at the center of the film, she does nothing to stop him and, in fact, overrules the objections of his wife.

Mankiewicz also questions the effectiveness of white liberal do-gooding.  Dr. Dan Wharton (Stephen McNally) is the Chief Medical Resident who defends (with qualifications) Brooks’ actions and tries to arrange the autopsy that could prove that Brooks did not kill Biddle’s brother.  But Wharton’s efforts fail, and after Brooks is cleared through his own initiative (he turns himself in to the police in order to force the autopsy that Biddle will not allow), Wharton disappears from the film, heading off to his secret retreat for a good night’s rest.  In Mankiewicz’s world, do-gooding liberalism exhibits itself as plucky speeches, meager action, and a quick exit before the final scene.  In fact, the last scene is played in Dr. Wharton’s empty house to which Biddle lures Brooks in order to kill him.  Mankiewicz draws parallels between Biddle breaking into the unguarded house and racism infecting social discourse while liberalism is off sleeping.

The combination of complex black characters with an acid rendering of racism and its attendant violence (Mankiewicz’s depiction of the build-up to the riot is disturbing even today) made for wildly divergent responses.  For Ebony, No Way Out was the “first out-and-out blast against racial discrimination in everyday American life,” while the American Klansman regarded the film as “a planned campaign to DEBASE THE WHITE CHRISTIAN people.”

More troublesome, however, were demands from various censor boards in Chicago, Virginia, Ohio, and Pennsylvania for cuts before the film could be exhibited (most complaints centered around the riot sequence).  Mankiewicz called the requests “absurd,” and with Zanuck’s support refused to alter the picture.  So despite excellent reviews from the New York critics and the film’s status as one of Zanuck’s personal projects, No Way Out received a truncated release and died a quick death at the box office.

Such a fate was doubly undeserved since in addition to being an acute social critique, the movie is a smart piece of filmmaking as well.  As usual, Mankiewicz combines sharp dialogue with precise mise en scène.  Apropos of a film entitled No Way Out, his imagery emphasizes doors (open, closed and locked), entrances, passageways, partitions and barriers.  Always a keen director of interiors, Mankiewicz heightens his style here: characters break into rooms, break out of them, are confined and restricted – in short, they (and the audience) are continually confronted with the reality and challenges of living in close proximity to other human beings.

No Way Out stands at the center of a quintet of films — A Letter to Three Wives; House of Strangers (1949); No Way Out; All About Eve; and People Will Talk — in which Mankiewicz chronicles and critiques postwar American society.  Melding the concerns of film noir with those of high comedy, he creates a unique hybrid genre which he uses to explore how the country was dealing with emerging questions of race, class, and gender.  That Mankiewicz devised a way to write and direct these films under the Hollywood studio system is remarkable; that he did so in less than three years is amazing.

Brian Dauth is a queer essayist and playwright living in Brooklyn with his husband Terrance.  His work has appeared in Senses of Cinema (on the careeer of Jsoeph L. Mankiewicz), The November 3rd Club (on Brokeback Mountain and The Reception), and MRZine (on Manderlay and Find Me Guilty).