Rhonda Erwin is a mother who lives with her family in the city of Sacramento.  Some families there are facing an epidemic of youth violence.  Politically, the response to this crisis is police and prisons.  Ms. Erwin has a different view.  She privileges prevention as a policy.  Currently, Ms. Erwin is forming a grassroots campaign to convince local politicians of this.

Seth Sandronsky: When did you become aware of the crisis of youth-on-youth violence in the city and county of Sacramento?

The number of youth in the south Sacramento neighborhood wearing “Rest In Peace” T-shirts increased tremendously.  When I went to the post office, grocery store, park, or mall or rode the light rail, there was a youth wearing a T-shirt with a photo of a murdered relative or friend.  I noticed the T-shirts oftentimes had different names and different faces.  I began asking the young people how their loved one had died.  Their answers were always the same — murdered before 25 years of age.  I asked if they knew more than one person murdered, and the answer was always “yes.”

SS: What is causing this wave of youth homicide in Sacramento?

RE: There are so many contributing factors.  I cannot answer this simply.  But hopelessness translates into lawlessness, hopelessness breeds hopelessness.  By not addressing the suffering, by allowing people to feel as though their pain is ignored, our society has sent out the message that the lives of these young people are meaningless.

As a society, we have become too quick to judge from media influences and too slow to respond from our hearts and conscience.  For decades in Sacramento, minorities have been dying at the hands of one another, with little attention focused on the deaths and arrests.  Their lives were deemed meaningless, and the death would result in effortless conviction or lack of arrest.  Then, without warning and because of special interest and greed, suddenly massive efforts were made towards arrest, which led to permanent removal of youth from communities (life-term enhancements).  Our society chose not to uplift the victims or victims’ families, not to empower siblings’ mourning or suffering.  Our society chose to ignore the crisis and place efforts into purifying and beautifying a city, place efforts into window dressing with false hopes and massive prison terms.  It no longer amazes me how the youth can see the hypocrisy.  By ignoring the suffering of people, you have to expect them to fall into a psychological frozen state.  You have to expect their sorrow to turn into chaos, confusion, and crime.

Without support, these youth are left to mourn the death of a friend/relative.  Without support, they are left to mourn the lifetime prison incarceration of a friend/relative ages 16, 17 or 18.  Youth violence/gang violence is cultural genocide/cultural suicide.  I believe if the youth were killing outside their race, we as a society would have found ways of prevention and we would not be faced with this wave of violence.  The violence has increased because the youth have become a reflection of the too many adults in political arenas choosing who will live and who will be allowed to die.

Our society, through massive campaigns, shows the tragedy of reckless drivers, eating disorders, suicide victims, but we send out the message through politics, laws, support groups, and media that the families suffering from youth-on-youth violence are less than human and feel no pain.   Lock them up, and throw away the key.  They are not displayed by the local corporate media as tragic victims . They identify with what is shown — “alleged suspects.”  What kind of signals does this send?  “You will make the news if you are a wanted or apprehended suspect; you are meaningless and insignificant as the murdered victim or family of the murdered victim.”  We have taught the youth they are suspects rather than victims.  We are teaching the youth the deaths of people like themselves is insignificant.  The wave of homicides will continue to increase if we do not teach the youth their lives are valuable by our community, politicians, laws, and people learning to value the lives of all youth.

SS: How has your activism mobilized other folks?

RE: I do not take credit for mobilizing others.  Knowledge is from the creator.  Anything that I may say of truth, I give credit where it is justly due — God.  I am one of many suffering whose voice has enabled others to understand and speak of their suffering.  We are seeing ideas shift from a “power over” paradigm to a “power with.”   Our community is finally mobilizing beyond using parents as the scapegoat to the responsibility of our failed society.

As an overwhelmed mother exhausted with fighting for the life of my son, a mother struggling to breathe life back into a child in a city that nearly left him breathless, I can now see the ignorant and prejudicial views shifting.  Not all parents need classes to focus on inadequacies to become self-sufficient or empowered.  Prior to now, our intelligence was blatantly insulted and/or underestimated with every door in this city leading to “parents’ responsibility.”  Non-profit organizations, schools, churches, social services offices held “parenting” classes.  A local judge issued a dress code to parents to enter juvenile hall courts; law enforcement and district attorney programs have set out to arrest parents for truant kids.  We are mobilizing past compounding the suffering of parents with insignificant, ineffective prejudicial efforts towards a community coming together to find effective prevention solutions to this overlooked crisis.

You can say we are beginning to evolve beyond “parent culture, parent educational system, parent judicial system, parent government, parent church, parent law enforcement and parent environment,” mobilizing past all thoughts leading solely to parents’ responsibilities, and utilizing and building a relationship with entities which receive funding and have a mission statement to protect, serve, provide social support (the government, church, law enforcement, educational and judicial systems).

SS: What are some of the proposed solutions to prevent youth violence, and what are the responses of the system’s institutions?

RE: Currently the system makes ineffective efforts.  For example, I was a speaker at a recent “Stop the Violence in the Community” program being offered by the Sacramento City Unified School District.  I was insulted when law enforcement boasted of their SPIRIT program in which high school peers do conflict resolution.  I thought, how insignificant.  We do not allow high school students to arrest; why would we consider high school students as equivalent prevention?

Recently, local police began speaking at various elementary schools, with a “Just Say No” program addressing youth gang recruitment.  First, “JSN” was an insignificant effort in itself to the drug epidemic (our society is still developing programs to tackle youth and drugs).  Why then would “JSN” be significant in addressing the deaths and suffering caused by youth violence?  Secondly, this program is not culturally sensitive to all.  In Sacramento, Hispanic and black gangs do not have a tendency to “recruit.”  I noticed a trend of insignificant “efforts” when I learned of the prejudicial efforts of the Sheriffs Department addressing gang violence.

I then began doing research, and I learned of the California Child Death Review Team.  Its Web site will enable readers to better understand the comprehensive thought/solutions developed for the fatalities of children/youth by all causes other than youth-on-youth violence.  (Information can also be obtained on <www.healthpolicycoach.org/doc.asp?id=6082>.)  There is no reason to reinvent the wheel. The DRT is an effective, evidence-based program/methodology of prevention — science-based, research-based, and utilized for the deaths of youth by abuse, neglect, suicide, eating disorders, drug-related causes, and reckless driving.

The only fatality not addressed by the DRT is youth murdered by youth.  Think about it: a youth takes her/his own life (suicide prevention programs); a youth is murdered by an adult (child abuse/neglect awareness month, numerous programs); a youth is murdered by another youth (life-term prison commitments).  I began to wonder.  Where are the DRT services such as public service announcements focusing on youth and disarming aggression?  Where are the billboards?  Where are the support groups acknowledged by the DRT as vital and important to uplifting families?  Where are the bereavement, grief, and counseling programs such as the DRT Victim’s Assistance program to address youth-on-youth violence?

I learned families of youth with a questionable past are not offered victims’ assistance funding.  Therefore, in the mist of grieving and suffering, parents are washing cars, selling barbecue chicken dinners, and selling their child’s photo on a T-shirt to raise burial funds.  Deceased youth are sometimes laying in the morgue for up to three weeks while parents who cannot afford insurance premium must focus on their inadequacies to lay their child to rest.  How can you become empowered by focusing on inadequacies?

The responses have been to pacify us with insignificant efforts.  We want “effective” measures to determine cause of gang activity and solutions of prevention.  We are exhausted of “efforts” of grasping at branches — we want the root of the issue of gang violence addressed.  I encourage readers to read California Penal Code Sections 11165.3, 11166.7, 11166.9 (a) (1) and CPC section 11166.8.  These sections exclude youth-on-youth violence.  These sections coordinate and integrate state and local efforts to address fatal child abuse and neglect deaths with an inter-agency child death team to assist family members, so they can receive the appropriate services in cases where a child has died.

Too often, our suffering is still ignored and the responses in support of comprehensive studies towards prevention have been few.  We are determined to reach our goal — we want all children to live and know freedom.  These are not 40- and 50-year-old serial killers/molesters.  We are putting all efforts into policing and convicting and not preventing deaths of 15- 16- and 17-year-old youth who are being influenced by the corporate music and film industry to spend the rest of their adolescent and their entire adult life in prisons. 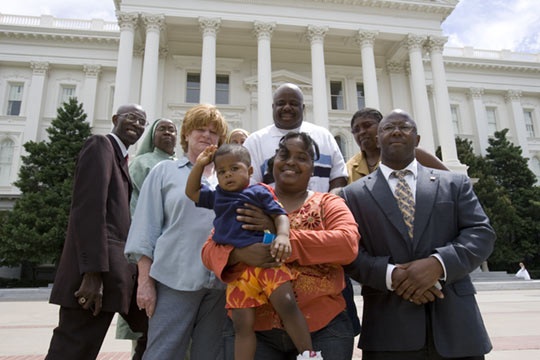 Rhonda Erwin and Her Allies, at the Capitol of Sacramento, Photo by Dale Crandall-Bear

Seth Sandronsky is a member of Sacramento Area Peace Action and a co-editor of Because People Matter, Sacramento’s progressive paper. He can be reached at <ssandron@hotmail.com>.