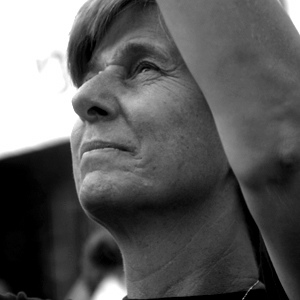 Cindy Sheehan has breathed new life into the U.S. antiwar movement. The Vacaville, CA mother did so — alone then with others — by protesting outside the Crawford, Texas ranch of a vacationing President Bush, dubbed “Camp Casey” for her son who died in oil-rich Iraq. Sheehan’s demand to speak with Bush about the “noble cause” for which Casey perished has emboldened thousands of people.

Their responses are expressed locally as momentum builds for the September 24th protest in Washington, DC to end the occupation of Iraq, led by the A.N.S.W.E.R. and United for Peace and Justice coalitions. Sacramento is one of the communities where grassroots activists have been busy speaking out against war.

“During the first three weeks following Cindy’s trip to Crawford, the number of people attending our rallies increased by over 100 each week,” said Stephen Pearcy, a Berkeley attorney who often organizes anti-war events in Sacramento. “Many people started coming out to participate for the first time ever.

“Parents brought their kids; high school and college students attended; and members of the Grandmothers for Peace, Veterans for Peace, and Code Pink attended. People are really getting angry about this war, and more and more of them want to go out and participate in direct actions.”

Opinion polls show that the majority of the American public opposes the U.S. occupation of Iraq. Changing these vexed citizens into active participants who can strengthen the antiwar movement is a concrete challenge.

Central to this process is the dynamism of communalism. It was alive and well at post-Camp Casey antiwar protests in Sacramento among newcomers who “really like participating when they know that lots of other people will be there, too,” according to Pearcy.

And what about expanding grassroots antiwar activism in light of the Hurricane Katrina disaster in the Gulf Coast region? That calamity harmed low-income people — mainly African Americans — most harshly, broadcast worldwide as the U.S. government occupied Iraq for a freedom that does not exist “from sea to shining sea.” Katrina revealed the barbaric face of a racialized capitalism in America that creates a few haves and many have-nots.

It is no overstatement, however, to say that the U.S. antiwar movement does not reflect the diverse working population of the nation. That must change. No justice, no peace. Not in the Middle East nor in the U.S.

“The peace community must link the Hurricane Katrina crisis with larger social justice issues such as race and class, specifically addressing poverty,” says Faye Kennedy, a peace activist and past president of the Sacramento Area Black Caucus. “We need funds for real homeland security such as education and job training programs, and health care for all Americans.”

Welfare-state policies for the American public have been under attack by U.S. upper class for three decades. Both political parties are complicit in this.

“One of the most patriotic duties we all have right now is to mobilize ourselves and let Congress know that it is genocidal to divert the resources of our country to kill people who are not our enemies both at home and abroad,” says Kathryn Hall-Trujillo.

She is a midwife and the director of the Birthing Project, which she founded in 1988 as a community-based maternal and child health program in Sacramento. Hall-Trujillo just returned from a humanitarian caravan with Pastors for Peace to take aid to Katrina victims in Louisiana and Mississippi.

“Bush’s recovery plans will be another broken treaty with my people,” she says. “These plans are based on what many of us believe is a lie . . . that there is an equal playing field, that it is an agreement between equals . . . that capitalistic greed and imperialistic power are not the controlling factors.”

Laurie Loving is the mother of a son deployed in the Army infantry to Iraq on August 16. She and her husband Russell, residents of Davis, CA (about 18 miles west of Sacramento) recently began a regional chapter of Military Families Speak Out.

“Six people attended our first meeting, one of whom is in the MFSO chapter in the San Francisco Bay Area,” Loving says. “We plan to attend the antiwar rally in Washington, DC on September 24th, then meet with other MFSO chapters the day after to discuss policies and strategies.”

MFSO began three years ago with one family and now has 2,400 families nationally, according to Loving. “This is a new thing, military families speaking out,” she adds.

George Main is with the Sacramento chapter of Veterans for Peace. They just finished four months of counter-recruitment protests at the Military Entrance Process Station in North Sacramento.

Counter-recruitment protests are most likely to weaken the U.S. war effort, according to Main, a veteran of the Vietnam War. “My biggest challenge is convincing people of this,” he says.

Main sees U.S. political culture changing as it becomes more acceptable to challenge the status quo of Washington’s wars against terror. For this change he gives much credit to the “Cindy” factor.

“Cindy is so mainstream, Middle America,” Main says. “People who she communicates with by e-mail and meets in person are quite moved by her genuine, wholesome nature.”

Main’s group has a fresh plan for local counter-recruitment protests in the future. He and other members of Veterans for Peace plan to organize at a Radisson Hotel where new military recruits will sleep.

Seth Sandronsky is a member of Sacramento Area Peace Action and a co-editor with Because People Matter, Sacramento’s progressive paper. He can be reached at <ssandron@hotmail.com>.