Tom Leedham, principal officer of Teamsters Local 206 in Oregon, is challenging IBT President James Hoffa on a reform slate in this year’s Teamster elections.  Leedham’s Strong Contracts/Good Pensions slate — and its rank-and-file supporters — won a big victory when their campaign was accredited for the 2006 International elections. 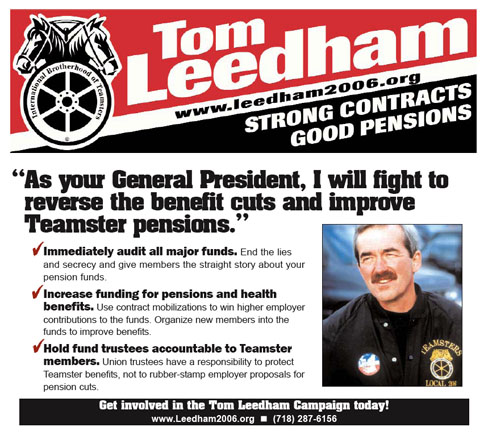 In just over a month, rank-and-file Teamsters collected more than 55,000 signatures at barns and loading docks, 20,000 more than the election rules required for accreditation.  Looking ahead to the Teamsters’ convention in June, the campaign is now helping rank and filers organize reform slates in their locals to run for convention delegate.

Leedham took some time from the campaign whirlwind to talk with Labor Notes about his vision for transforming one of the nation’s biggest unions — and for the labor movement more broadly.

Leedham will be a featured main panel speaker at the upcoming 2006 Labor Notes Convention.

Your slate is called the “Strong Contracts/Good Pensions” slate, but I’m sure incumbent IBT President James Hoffa, Jr. would argue that he also stands for strong contracts and good pensions.  How does your slate’s approach differ from Hoffa’s?

You have to look at the track records.  I’ve been a working Teamster and officer for over 20 years.  Before reformers took over here at Local 206, our healthcare and pensions were in shambles.  The local’s healthcare trust was broke.  We had any number of two-tier and even three-tier contracts [allowing the companies to divide members by paying lower pay and benefits to the new hires].

It took years of hard work — and rank and file organization — to turn that around.  We eliminated the two-tier contracts.  We worked together.  We used one-on-one member organizing — the model of the UPS contract campaign.  This is what we are about as a campaign.

Look at the facts: this is the first time pensions have been cut in this way in the history of our union.  Accrual rates have been cut more than half in some of the funds.  In the Western Fund — which is completely funded — some members have seen cuts up to 25 percent.  And it’s worse in other places. In the Central States Pensions Fund we’ve literally lost 30 and out.

And this is all in addition to a shrinking membership.  We’ve failed to organize in our core industries.

You’ve been in the Teamsters for many years.  What’s changed in the union since Hoffa was first elected in 1998?

For starters, the only thing that has gone up is members’ dues and officers’ salaries.  He pushed through the biggest dues increase in the union’s history.  Hoffa and company have doubled the union’s budget, but this budget hasn’t been used to win good contracts or organize in core industries.  It’s just been dues wastage.

The defining failure of the Hoffa administration is Overnite.  They called a strike that dragged on for years and failed to organize the company.  UPS’s purchase of Overnite makes it a major player in the logistics industry: UPS is now the fourth biggest logistics company in the world with $8 billion in business.  Now UPS, one of our key areas, has a big part of its business operation in a non-union department.

The roads to rebuilding power, reclaiming our pensions, organizing in core industries — all of these roads lead through Overnite.

What role do you see rank-and-file Teamster members playing in this year’s campaign?

Hoffa has a ton of money stored up.  He has a patronage system and a slick PR program.  Our campaign, though, is a grassroots campaign.  We’re going to organize it like we’d organize for a contract: with member-to-member networks.

The win we had on accreditation is an example of this.  We literally had thousands of teamsters in the United States and Canada turn out their organizing efforts for that drive.  We only had to turn in 30,000 signatures and we turned in 55,000 in four weeks’ time — and more were coming as the deadline passed.  This has never been done in this amount of time.  It was a really good test of our grassroots organization.

Organizing new members is a major challenge facing all U.S. unions — and all the more so for the Teamsters who have seen dropping density in its core industries like freight.  What is your vision for a new organizing program?

First of all, we have to cut out the dues waste and free up as much money for organizing as we can.  But just as importantly, our organizing has to be driven by members and it has to be strategic.

We want to train a 1,000 new member organizers, and we’re going to focus our efforts in our core industries.  Overnite, DHL, Fed Ex: these are major new non-union competitors that we need to pay attention to.

If you look at the history of the Teamsters, it is members that believe in their union that make the real organizers.

The next Teamster leadership will be facing expiration dates on master contracts in UPS, freight, and carhaul.  How would a reform leadership build up to these expirations?

The 1997 UPS contract campaign serves as model, but it is not enough.  We have to start even earlier and build even more effectively.  We have to get Teamsters off the docks and into the campaign.  We have to get them seriously informed about the issues surrounding negotiations.

We have to be prepared to bargain to organize.  Card check and neutrality agreements can be won by members in the course of a contract campaign.  You need the full support of the membership.  You have to show the relationship between what is happening in someone’s workplace and what is happening in the unorganized places.

UPS logistics is once again a good example of the problem.  Hoffa dropped the ball when he failed to address the spread of nonunion parts of the company in the UPS master contract he negotiated in 2002.

Pensions are one of the overriding issues.  In a good lead-up to a contract, members choose the issues.  I fully suspect that members will pick pensions as one of their major issues.

THE MOTOR OF THE MOVEMENT

At your campaign kickoff at the 2005 Teamsters for a Democratic Union Convention, you talked about how a reform win in the Teamsters could be “the motor to revitalize the labor movement” after the split last summer.  What connections do you see between your campaign and the broader U.S. labor movement?  Would a reform leadership in the IBT play a role in mending the AFL-CIO/CTW split?

The Teamsters play an extremely important role in the life of the U.S. labor movement.  With our 1.4 million members we can either be a motor or a brake on its progress.  The 1997 UPS strike was the high-water mark of the labor movement in recent years.  When members are in charge of this union again, we can play that role again.

Under my leadership, the Teamsters will work with all other unions and community groups that are willing to work with us.  We have to challenge corporate power and we have to build strong contracts at the same time.

One important thing that we need to do is organize around the crisis in healthcare in this country.  The economics of healthcare plays such a key role at the bargaining table in just about every contract negotiation we have.  We want to work with all reform-minded groups who want to work on solutions to this crisis.

I would rather have seen this whole debate [about the strategy and structure of the AFL-CIO] be about compelling ideas as opposed to a split.  There was no real discussion or democracy inside the union and the split was a waste of resources.  If [SEIU International President] Andy Stern or Hoffa had such a compelling vision about how to change things, why didn’t they win on the strength of their ideas, instead of split?

What are the challenges facing the campaign over the next year?  What gives you hope?

The challenges are in mobilizing enough Teamster members to get the message out.  Ours is a grassroots campaign, it’s made or broken on that.

The success we’ve had so far inspires me with great hope.  The organization of our petition campaign for accreditation shows the strength there.  The response from Teamster members we’ve had so far has been phenomenal.

For more info on the campaign, visit www.leedham2006.org.

Chris Kutalik is currently co-editor of Labor Notes in Detroit. He comes to labor activism through his experiences as a local officer in Amalgamated Transit Union local 1549 in Austin, Texas and has served as an editor and writer for several alternative and mainstream publications. He can be reached at <chris@labornotes.org>. This interview first appeared in the March 2006 issue of Labor Notes.